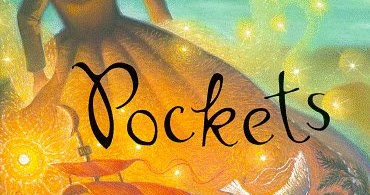 “A slim schooner of a woman, driven by strong winds and a broken heart, floundered barefoot across the eastern plains until arriving at the edge of a village.”

So begins Jennifer Armstrong’s Pockets, a memorable and beautifully illustrated tale of a seamstress who finds herself in a place where nothing but hard work is valued. The women’s extensive sewing skills (she can sew anything from frocks to pantaloons, doublets to farthingales, mantuas to petticoats to gowns) are considered useless, a distraction, and she is allowed to remain in the village only on the condition that she sew useful things.

Over time, the seamstress becomes depressed. Every garment must be simple and sturdy. The only acceptable fabric is coarse and gray. One day, at a low ebb, she takes a dress she’s been preparing for herself and turns the pockets inside out. She embroiders the fabric with ships and corals and blue-finned fishes. And when she tucks the pockets inside the dress and tucks her hands inside the pockets, she is transported to the sea. In her imagination, she rides the waves and hears the song of the sea birds, and she is glad.

When the mayor’s wife shows up requesting a new dress, the seamstress fills her pockets with golden thread, embroidering the shining towers of Constantinople. The mayor’s wife dons the dress, slides her hands into the pockets, and bursts inexplicably into tears. Though she is inconsolable for days, she finally shakes off her grief, gathers the tiny flowers that grow in the cracks of the stones, and teaches herself to sing.

It’s the same with the blacksmith. Inside the pockets of his new trousers are the forests of Norway, “where dragon-prowed ships cut through fjords turned silver with herring.” That man begins to hear the music of hammer and anvil; he finds charms and beauties in his wife that he had never noticed before. Before long the drab, gray town in the plains wakes up. Houses are painted in crimson, azure, and gold. People begin to dance, discuss poetry, bake tarts. “And everyone learns the names of the stars.”

Armstrong’s Pockets reminds me of Sandra McCracken’s “Dynamite.” “To bend the will,” McCracken writes, “you first must change the heart.” Armstrong’s seamstress chooses a course of action that is both wise and clever. While no one is looking, she tucks something lovely into the small, forgotten places. She rouses a dormant longing in the hearts of the villagers. She brings a renaissance, brings the kingdom; she changes everything. With pockets.