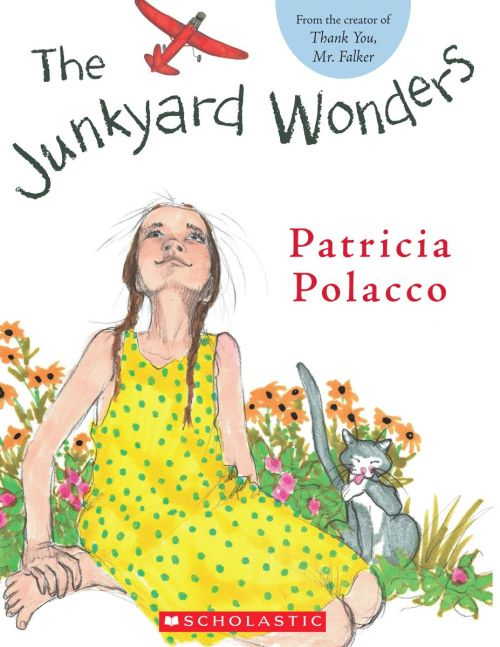 It’s the first day of school, and Patricia stands on the front steps of an unfamiliar brick building with a class card in her hand. Two girls, standing tall and confident in their bright poodle skirts and saddle oxfords, give her card a quick perusal. “You’re in Mrs. Peterson’s class,” they say, smirking. “Upstairs. Room 206.”

Room 206 is populated with an unusual assortment of students. One shouts across the classroom in odd, involuntary bursts. Another doesn’t speak at all. One boy is larger than the rest. Patricia finds a seat beside Thom, and he informs her that the “super-tall” kid has a disease that makes him grow too fast.

The door swings open, and an imposing woman enters. She walks to the front of the room, sizing up the students over her wire-rimmed glasses, and slams an enormous dictionary onto the podium. She opens the dictionary, beginning the first class on the first day of school with a definition. To this group of misfits, she says:

“Genius is neither learned nor acquired.

It is knowing without experience.

It is risking without fear of failure.

It is perception without touch.

It is understanding without research.

It is certainty without proof.

It is ability without practice.

It is invention without limitations.

It is imagination without boundaries.

It is creativity without constraints.

“Welcome to the junkyard,” she continues. “I am your teacher, Mrs. Peterson. I want all of you to write the definition on the blackboard. Post it on your mirrors. Look at it every day. Memorize it! The definition describes every one of you.”

Before long, Patricia has been assigned to a group. Mrs. Peterson places a drop of scented oil on each of the students’ wrists, and they have to sniff out their new tribe. Patricia ends up in the Vanillas with the “super-tall” kid (Jody), a boy who loves ballet (Thom), a boy with Tourette’s (Gibbie), and a girl who never, ever speaks (Ravanne). For all their oddities, it turns out that each of the Vanillas is wildly gifted in one area or another. Ravanne is a whiz at math. Gibbie loves to build things. Jody is a poet. Thom is a wit. They find that they suit each other very well, and a deep bond of friendship develops.

But there is still a misunderstanding between the students and Mrs. Peterson. They believe their class is called “the junkyard” because they are different. Special. The students outside of Mrs. Peterson’s class believe as much, and they won’t let any of the junkyard gang forget it. “Weirdos,” they call them. “Retards.”

The students, discouraged by the taunts, tell Mrs. Peterson that she’s just trying to make them feel better. Gibbie speaks up, voicing his classmates’ feelings. “We’re throwaways, junk, and everyone knows it.”

“Oh, my dear, that’s where you are wrong,” Mrs. Peterson replies. “Every one of you is my wonder. Don’t you realize what a junkyard really is? It is a place of wonderful possibilities! What some see as bent and broken throwaways are actually amazing things waiting to be made into something new. Something unexpected. Something surprising.”

Mrs. Peterson takes the class to the junkyard, assigning each group to find the possibilities that others have failed to see. The Vanillas, spurred by Gibbie, find the materials to construct a model airplane. “This baby is goin’ all the way to the moon!” he says. His prediction comes true, and you’ll never believe how.

If you’re familiar with Patricia Polacco’s work, then you must have guessed that she was the artist of the group. In fact, I recently learned that Polacco could not read until she was 14 years old, when she was finally tested for learning disabilities and found to be dyslexic. There’s no knowing how deeply her year with Mrs. Peterson impacted Polacco, but she is now an award-winning author of dozens of children’s books. She even wraps up The Junkyard Wonders with an update on some of her fellow Vanillas. Thom, the boy who loved ballet, went on to become the artistic director of the American Ballet Theater Company in New York. Ravanne moved to Paris and became a fashion designer. And Gibbie, the boy who loved to build things, became an aeronautical engineer for NASA.

I’m always moved by Polacco’s emotionally charged illustrations, but this story stands above the rest. Polacco allows the reader to glimpse an intimate and painful page from her life. We get a taste of the rejection she experienced, of her heartache and self-doubt. We also get the opportunity to remember the teacher or parent or mentor who saw us not for what we were (struggling, confused, naïve, uncertain) but for who we were created to become, who recognized the small steps we were already making on that perilous journey…those dear souls who pulled scraps from the junkyard and rocketed them to the moon.