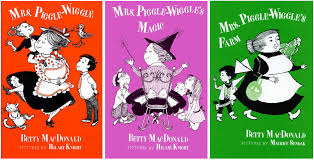 Mrs. Eddlemon, my second –grade teacher, earned my undying love in two ways: first, she rewarded good behavior with “Funny Bucks” (which we stored in cigar boxes) and allowed us to shop at her General Store on Friday afternoons, and second, she read Mrs. Piggle-Wiggle books to our class whenever she could squeeze them in. When Mrs. Eddlemon read the stories in 1987, they were already forty years old, but the archaic traditions and obscure cultural references didn’t phase us seven-year-olds in the least. We adored Mrs. Piggle-Wiggle.

When Molly O’Toole was looking at the colored pictures in Mrs. Piggle-Wiggle’s big dictionary and just happened to be eating a candy cane at the same time and drooled candy cane juice on the colored pictures of gems and then forgot and shut the book so the pages all stuck together, Mrs. Piggle-Wiggle didn’t say, ‘Such a careless little girl can never ever look at the colored pictures in my big dictionary again.’ Nor did she say, ‘You must never look at books when you are eating.’ She said, ‘Let’s see, I think we can steam those pages apart, and then we can wipe the stickiness off with a little soap and water, like this – now see, it’s just as good as new. There’s nothing as cozy as a piece of candy and a book. Don’t look so embarrassed, Molly, I almost drool every time I look at those gems – which one is your favorite? – I think mine is the Lapis Lazuli…

Another nice thing about Mrs. Piggle-Wiggle, when a child makes her a present, no matter how splotchy or crooked it might be, she uses it and keeps it where everyone can see it.

Johnny Wilfred made her a vase out of a meat sauce bottle with such a little neck that only flowers with stems like hairs would fit in it. Not only that but he painted it a sort of bilious green and the paint was too thick and ran down the sides in warty lumps. But Mrs. Piggle-Wiggle loves Johnny, and she loves the vase because Johnny made it for her, and she keeps it on the window sill above the sink with at least one flower, gasping for breath, jammed through its little neck. Every time Johnny comes into her kitchen he points proudly to the vase and says, ‘Do you see that pretty vase over there on the window sill. Well, I made it for Mrs. Piggle-Wiggle, didn’t I, Mrs. Piggle-Wiggle?’”

This glowing introduction is only the beginning. Betty MacDonald wrote four Mrs. Piggle-Wiggle books in which the delightful old lady (who lives in an upside-down house) cures children of a variety of “childhood ailments.” Sometimes she uses magic, like the magic licorice drops she had Mrs. Hamilton give to Wendy and Timmy when they could do nothing but tattle on each other from morning to night. The drops had a curious effect: every time Wendy and Timmy opened their mouths to tattle, a black cloud with a long, dangling tail puffed out from between their lips. The children were horrified by the icky, smoky clouds that drifted up to the ceiling and hovered overhead, black tails swaying softly. It took less than three days for the Hamilton children to abandon their tattling.

Sometimes Mrs. Piggle-Wiggle gives practical solutions, like the time Dick Thompson refused to share any of his toys with anyone, and Mrs. Piggle-Wiggle sent Mrs. Thompson a Selfishness Kit full of labels and paint and padlocks and keys. When every single item that belonged to Dick bore a large warning sign such as “DICK’S BIKE – DON’T TOUCH!” or, written in frosting, “DICK’S SANDWICH – DON’T TOUCH!” and every single box and drawer in his room was padlocked shut (to be sure no one touched his things), Dick discovered the humiliation and practical inconvenience of selfishness. He learned to share in less than a week.

Irresponsible children and those lacking in confidence go out to stay at Mrs. Piggle-Wiggle’s farm. They pitch hay for the horse, milk the cow, tend to the sheep and pigs, and return home reluctantly, having learned that others are depending on them, that they can take pride in their work, and that they have something to offer.

It’s been interesting to hear how my kids respond to these stories. They laugh at the characters’ silly behavior and at Mrs. Piggle-Wiggle’s outlandish cures, and sometimes they look at me, with serious expressions, and say, “We have the same problem.” Better still, I enjoy MacDonald’s writing so much that I’d keep reading even if the kids left the room. The minor characters have names like “Mrs. Quadrangle” and “Fetlock” and “Mrs. Harpoon” and “Hearthrug.” The neighborhood mothers, when pressed for advice, give the most ridiculous and hysterical answers. And MacDonald’s portrayal of daily life for women in the 1940’s is divine. One example: mothers feed their families at least three eleven-course meals each day, and the children, upon returning home from school (and before a delicious dinner of tomato soup, salad, lamb shank, gravy, potatoes, rolls, baby carrots, peas, string beans, canned peaches, and lime jello) are treated to huge slabs of gingerbread, piles of cookies, shiny red apples, jugs of milk, and so on.

If you’re looking for a delightful read-aloud that will have the whole family laughing and, perhaps, reflecting constructively on some of their bad habits, you can’t do better than the Mrs. Piggle-Wiggle books.