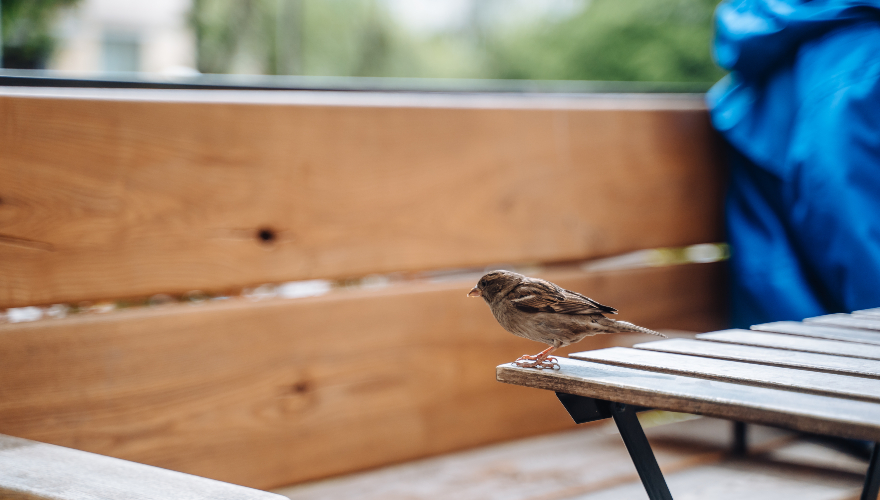 Several years ago, my sons and I built the birdhouse that now hangs on our deck. We waited for the locals to find and use it, but for one reason or another they didn’t. One season a family was started on the rafters of the deck—some kind of finch, I think—yet the house remained unused.

You can imagine, then, how pleased we were to see a sparrow nesting in the birdhouse this spring. It wasn’t long after our first sighting before both male and female were on guard, then on feeding duty. In a short couple of weeks three hungry mouths emerged at the house’s opening, loudly proclaiming their hunger. And then, just as swiftly, they were gone.

It’s high summer as I write this, and those first three sparrows are practically adults—as I imagine anyway. I’m also glad to report that two more broods have been hatched since then, and a fourth is on the way. An embarrassment of sparrow-riches! My hope is this is just the beginning, and next year we’ll see more of the same.

Something about the common sparrow brings me particular joy. They’re quick, alert, industrious, but then again, so are most birds. Unlike the others, their colors are drab—the usually flashy male is mostly brown with a splash of black on the throat. Compared to the jay, robin, or cardinal, they’re dirty-looking: and yes, those little flyers take dust baths and eat pebbles, too. Common in more sense than one.

But that’s just it—the joy I find in them is rooted in their commonness. They are taken for granted; they swoop in and out of traffic, make nests in the open letters of signs, sit on our fences, fight in our driveway, and lift themselves in clouds from the lawn at a sudden noise. It’s easy for them to blend in, for us to stop seeing them.

This parallel is sparked in my mind not from a comparison but a contrast made by Jesus in Matthew 10. He’s sending out the 12 disciples, and before they go he’s giving them instructions and encouragement. He’s telling them not to fear those who can kill them, but to fear God. Then this: “Are not two sparrows sold for a penny? Yet not one of them will fall to the ground apart from the will of your father…So don’t be afraid; you are worth more than many sparrows.”

Jesus chooses the sparrow, the most ordinary bird in the air or on the ground. And that’s the point. If this rodent with wings (as some think of them) is never beyond God’s will, never cast away, then what of you? What of me? How dare we assume God has forgotten anyone?

And there’s more: I see the sparrows on our deck, and I can’t help but think about the intricate love of God—it is quick, alert, industrious. For a few months now the two nesting birds have helped bring my mind to the small ways God is mindful of our many needs, to the ways he’s on guard—to how easily we miss his activity.

In fact, watching the birds has revealed that I sometimes slip into an alternate reality, one in which I suspect that God has ceased his good works for us. That we’re alone. It’s as easy to do as failing to see sparrows though they surround us.

This is why I hope the birds multiply. It’s why I’ll guard their nest from bigger birds. The little ones remind me that no one is common in the negative sense, their consistent presence helps me pray for those I’ve failed to see—family or not—and they swoop in with a sharp kind of hope breaking from their beaks: God is on the move, stop for a minute to see it, to know it.

I wish we could thank our sparrows so they understood, yet I suppose hanging the birdhouse in the first place was our part in all this—a kind of preemptive thanksgiving. However, I’ll thank our Father, who created them just as he did us, and I’ll remember their value on his terms. And ours, too.

Ian Anderson
Ian M. Anderson is a high school educator who considers it an honor to read and write alongside his students. He loves Jesus, drinks coffee, tends small trees, and lives in Central Kansas with his wife and their three sons.

His Middle Grade fantasy A Mossy Story is available through Wipf & Stock. He blogs at https://ianmanderson.blogspot.com.