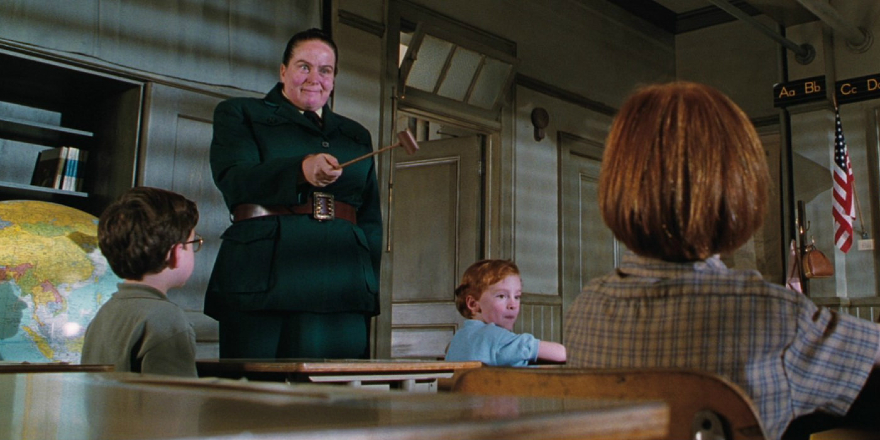 This summer, we dove into Roald Dahl. He accompanied our family across the state of Washington, up mountainsides and deep into green pastures, baking in the smoke-hazed sun. Charlie and Danny and Willy and Mr. Fox were our clever, British-accented companions as our long days danced past on beaches and baseball fields, under fireworks and ankle-deep in creek beds. But only as our year returned to school schedules and shorter days did our oldest daughter acquiesce to spending time with my favorite Dahl heroine: Matilda. Glory came bouncing into our room one weekday night, eyes shining and hands clapping: “I finished, Mom! Matilda was sooo wonderful! And she’s with Miss Honey! Oh Mom, I loved it! Can we watch the movie soon? Tomorrow? Please?”

Let me establish a few major characters in our household, so what follows can have some depth and perspective: my husband and I both studied English literature in college; he’s a professor of it now. Our Glory-girl is 10, and has been a sensitive, good first foray into story discernment for us. Winnie-the-Pooh getting stuck fast in Rabbit’s front door was a cause of major angst until she was eight… so she wasn’t ready for big-C conflict and pain and broken world motifs until very recently.

Then there are our boys, almost-9 and 7, who live for the dark thrill and epic, danger-fraught story. They BEG to watch Jurassic Park movies and try to scare each other at night with outlawed tales of monsters lurking in every shadow once they’re tucked in their beds. It’s been a delicate balance, figuring out how to love and meet each child where they are when we select stories and entertainment. All this is to say, if Glory is ready for something, the boys probably have already been there emotionally for a good year or more. She’s our default canary in the coal shaft of maturity for our kiddos.

So, the next day, once all schoolwork and housework were done, we made snacks and the kids and I settled in to watch Matilda—the Danny Devito version with the fun soundtrack I loved when I first saw it as a teenager. The kids laughed, they loudly asked questions both logistical and rhetorical (How can she move things with her eyes? Why would any parent send their kids to that school once they saw it?) and at the end, Glory and I both happily cried as the Wormwoods gleefully drove off, finally out of Matilda’s life forever. A success, we decided.

Then I went into the counseling chamber (our kitchen in theory, but in reality this is where the heavy cargo gets lifted in our house), and our eldest boy trailed in behind me, eyes down, quiet.
“Hey bud” I said, “What? What’s up?”

“Mom” he whispered, finally looking up at me, “that was the scariest movie I’ve ever seen.”

All the sound got sucked out of the house in that moment. What? Scary, in a bad way? Scary how? How can he be fine with dinosaurs eating people, but a fantastical tale about a six year old girl punishing adults who are bad…. Ohhhhhhhhhhhhhhhhhhhhhh.

And we did. And we have. He was frightened by the negligence. By the apathy. By the cosmic selfishness of parents who reject a child they don’t understand. By the physical and verbal abuse of a monstrous headmistress who is only as powerful as the parents around her are willfully blind.

This was a good lesson, for both of us: Hawk is fine with dinosaurs eating people, because, well, that’s what dinosaurs were created to be: predators. They’re dependable like that—the world still makes sense and is predictable, under control, if all creatures are behaving according to their design.

But a parent who just signs away their child? Who forgets to feed and notice a two year old girl? Now that’s a real monster. That’s actual terror. And, as much as I hate having been so totally wrong in anticipating how this story would hit our boy, this was a lesson ultimately necessary for him, though he’s only almost-nine. I wish we lived in a world where he would never need to know about parental abuse. I wish we lived in a world where he could maintain his trust in all adults, all authority figures. But the hard-and-fast-and-ugly reality is this: he doesn’t. We don’t.

We had to talk about the fact that adults are sinners, too. That he can trust his Mom and Dad, and many other adults… but not all of them. He needs to know if an adult is behaving in a way that reminds him of Mrs. Trunchbull, even a little bit, he should run to his Mom or Dad immediately and we are going to listen to him, because we love him. He also needs to know that he will interact with many kids who have good, loving homes like his—but he’ll also interact with a lot of kids who don’t. Kids who maybe don’t have lunch at lunchtime, or anyone who comes to their baseball games. He needs to look out for those kids, and tell us about them, too.

As much as I wish I’d been wiser, more discerning, about choosing our entertainment that day, I can praise God that He used it for good. Now we have more family archetypes to refer to when talking about a hard, ugly part of our broken world: Mrs. Trunchbull. Mr. and Mrs. Wormwood. If we can help our kids frame the world in which they’re living within the context of these archetypal characters, they can understand if not the sinful motives, then at least, to riff off C S Lewis, that these monsters can be beaten.

We also have a new hero to look up to: Miss Honey. She was someone who seemed weak, but was actually tremendously brave. Someone who could have run away, but who stayed in a scary, dangerous place because she loved the children around her and wouldn’t leave them alone, defenseless against a monster. Someone who looked for outcasts and gave them an advocate, and a home. Someone who is but a shadow of the Greatest Hero of all. Somehow, once again, all the good stories point back to Him.