One morning when my granddaughter Easton was three years old, she and her mom and I were driving to get donuts when she said, “A lion!”

My daughter and I glanced back at Easton in her car seat, then followed her gaze and chubby finger pointing up to white clouds in the blue sky outside of her window. No words were spoken. We drove on, a catch in our throats and tears in our eyes.

The fact that we both love Easton to the point of fanaticism was obviously a motivating factor in our emotional response to this innocent moment of discovery, but I also believe a revelation about humanity was another. In that moment, we witnessed the innate gift of wonder and imagination given to Easton by God – a gift He gives to every human being, and we were overcome with gratitude and joy for it.

Up to that point in Easton’s life, cloud gazing with the purpose of seeing images in them had not yet been visited. And still, she saw her lion. Nobody teaches us to pretend while playing or to see magic in even the most mundane things when we are young. We just do. Imagination is part of our fabric as human beings, and without it the world would be a colorless, joyless, and backward place.

Roald Dahl’s quote, “Above all, watch with glittering eyes the whole world around you because the greatest secrets are hidden in the most unlikely places. Those who don’t believe in magic will never find it,” is a favorite of mine and thousands of others because of its undeniable truth.

We are born “Watching with glittering eyes…” and those of us who keep doing so certainly do find magic. I am sixty-one years old, and I still see fantastical things in the clouds, exhilarate in the wonder and majesty of thunderstorms, and find mystery (or at least its promise) in all kinds of “unlikely places.”

Largely because of this, some of the most discouraging moments of my teaching career were when my high school students claimed they could not write a fictional story because they “couldn’t think of anything to write.” I would try to encourage and prompt them by asking if they ever daydreamed or remembered playing pretend when they were young. Too often, the response to both was “No.”

As an experienced teacher, I could easily discern which of these were mere attempts to get out of writing due to laziness or fear, and which ones were truthful. The latter was always the most disheartening. If we are all born with the gift of imagination, as I know we are, what does it take to squelch that most miraculous of gifts? Imagination should be encouraged and cultivated in those around us, no matter the age.

I was blessed with parents who did that for me. One of Dahl’s books is entitled Never Grow Up, and I am sure he upheld that mantra, largely due to his vivid and wonderful imagination. Similarly, my dad affectionately named each piece of the heavy machinery he used for his construction business, giving them their own personas. I believe Gunther, a bulldozer and rough burly type with a big heart, was his favorite, but he of course, wouldn’t have wanted the others (backhoe Buford, for instance) to know it.  He made up and sang silly songs while he worked, and I know his imagination was sparking at least 98% of his waking hours. As a result, he was truly happy and young up to his death at age 84. This wouldn’t have been possible without the joy-infusing, God-given miracle of imagination–one of the simplest and most-enjoyable ways of glimpsing His face. 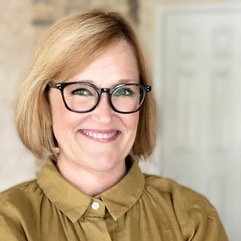 She lives with her husband, Matt Monzingo, and their two Labrador retriever children, Hoss and Belle, in a small lake house outside of their hometown of Memphis, TX, located in the Texas Panhandle.