It had been three days since I asked Marianne to marry me and she still had not given me an answer. “Let me think it over, Henry,” she had said. Well, how much is there to think over? The question requires a one-word answer and I would rather have been rejected then and there than endure these days of anguishing uncertainty. I couldn’t stand another moment of my mother’s half-raised eyebrows or my sisters’ muffled giggles, so I decided to go for a walk in the woods behind the chapel.

I hadn’t any reason to walk through the forest in particular, except perhaps that it was the surest place to be completely alone. Folks mostly kept out of it because they said an old hermit named Pluvio lived somewhere in there. Nobody knew anything for certain about Pluvio, so of course everybody knew some sensational rumor about him. On that particular morning, however, the hermit was far from my mind. I was only thinking of the blush in Marianne’s cheeks when she had said, “That’s very sweet, Henry. Let me think it over.”

As I said, I was not in the woods to find old Pluvio, but he found me. I was leaning against a tree when he was suddenly rounding the trunk, quiet as a cloud. Indeed, he gave the impression of a sunken cloud with his full white beard and soft, grey robes. I was momentarily stunned by this intrusion of my solitude and did not move from my reclining position. Pluvio did not seem to expect a greeting nor did he offer one himself, but fixed me with his weary eyes and spoke thus:

In the days when very few men lived on the earth and the rainbow was something he could pull from the sky, there was a certain wanderer who wanted to see God. He searched among the mountains, but he did not find God in the mountains. He searched among the seas, but he did not find God on the seas. He walked all the paths known to men in day and in darkness, but nowhere he went did he find God. One day, fatigued from straining limb and eye in the fruitless search, this wanderer sat down on a rock to ponder his circumstances.

“Perhaps God is too great to be found by searching,” he said to himself. “I must become as great as God, and then he will search for me! If I can do this, finally I will see God.”

He looked down at the tattered rags and worn-through sandals that he wore.

“If I am to be as great as God,” he said, “I must be clothed in splendid colors, for they say the Mighty One uses the sunrise as a mantle and the raging winds as his shoes.”

So the wanderer wrought robes of scarlet silk and sandals with silver laces. He waited on a hill for God to come to him, but he did not see God. So he sat down once more to think.

“Perhaps,” he said, “I am not yet as great as God. They say he is so wise, he can tell the leviathan’s thoughts and has measured the foundations of the world. I must travel the four corners of the earth and behold all that creeps and crawls between. Then I will be like God and he will come to me.”

So the wanderer took a mule and rode to each corner of the earth. He found a giant beetle in the north, a pebble-sized elephant in the south, a wolf of gentle spirit in the east, and a flesh-eating lamb in the west.

He waited in a valley, but he did not see God. As he stood, alone but for the mule, another thought struck him. “They say God makes the fire and flood his messengers. The earth is his footstool and the thunder is his chariot. I must rule over men and beasts and have dominion over many lands. Then I will be like God.”

So the wanderer took up a shield and won over men’s hearts with wonderful words or with a sharp whip striped their backs. When at last he was ruler of vast lands with countless servants ready at hand, he climbed the bulwark of his palace and waited for God to come. Yet he did not see God. He looked upon the many jewels which his servants had dug up from the earth and piled in his halls.

So he ordered his servants to build a tower and atop that tower, a staircase, and atop that staircase, a ladder, and atop that ladder, a pedestal. Then the wanderer stood atop the pedestal and waited for nightfall that he might pull the stars from the sky. At twilight, before he could begin his work, the air was filled with the smell of incense and the sound of bells. The wanderer trembled and wondered, “Have I found God at last?” for he could not discern the source of these marvels.

Then a voice fell through the air like a waterfall and said, “What are you looking for, little one?”

At first, the wanderer had strength for neither speech nor motion. Then a gentle rain came to moisten his lips and cool his brow and he found that he again had power in himself.

“I am looking for God,” he answered to the mighty voice.

“Wherefore do you seek him at this height?” The voice asked.

“Here I seek to obtain the stars,” replied the wanderer, “Because if I become as great as God, he will present himself to me.”

“Know you not,” came the roaring voice, “that God is close to the humble of heart? If it is God you wish to see, here is the way to him: topple this tower, give away your jewels, and renounce your rule. Become lowly and contrite—then you will come to the throne room of the Most High.”

The voice ceased, the bells faded, and the incense wafted away. When the wanderer’s knees were once again sturdy and his heart had stilled, he stood atop the pedestal, piecing through his many thoughts.

“Have I given myself over to every kind of labor to receive an answer of this sort?” he said and bared his fist at the sky. “Is God so proud that he will not suffer such as I but to be his servant? I, who am clothed in splendor? I, who traveled to the four corners of the earth and have made many lands my dominion? So be it. If God makes himself far from me, I will make myself far from God. Ill tidings will I bring to the Mighty One when I have become as great as him!”

He shook so in his wrath that the monument on which he stood first swayed, then cracked, and finally collapsed. Great was the fall of it and by its fall a cavern was created in the earth. There, in the bowels of rock and slime, the wanderer dwelt, but bent from his fall so that he never again could stand straight. Among the underground ruins, the wanderer built his kingdom and beguiled many from above to live with him below.

Without the light of the sun, however, the shapes of men grow twisted and their color, motley. Thus, their caverns became the realm of hobgoblins. Their king, the bent wanderer from far gone days, works ever to grow as great as God whether in strength or in knowledge or in wealth or in worship. His servants follow their master in every spiteful and malicious scheme. They seldom venture from their sepulcheric kingdom except perhaps to vex the dreams of children.

His tale having ended, the hermit drifted on his way and disappeared among the trees. I returned from the forest in a hurry to write all this down because, although I don’t believe in such things as hobgoblins, I couldn’t help but feel the old man’s story was very important.

When I had finished, I remembered the question I had put to Marianne three days ago while leaning in her window: “You’d like to marry me, wouldn’t you Marianne?”

I hadn’t even taken off my hat.

With heart racing and hands shaking, I hurried back to her house to put the question proper. I hoped it wasn’t too late. 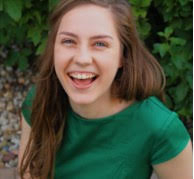 Lauren Tebben
Lauren Tebben studies English at Grove City College. She enjoys reading aloud A. A. Milne to any person, animal, or tree that will listen and hopes someday to catch a heffalump.