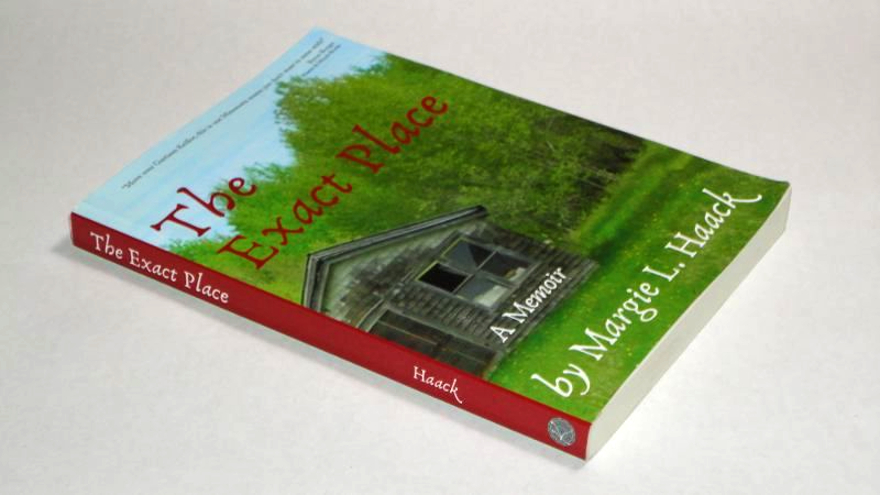 Margie Haack, the author of The Exact Place: A Memoir, and her husband Denis, following in the footsteps of Francis Schaeffer and the work of L’Abri, spent decades ministering to people through Ransom Fellowship in Minnesota. Through hospitality, speaking engagements, and their Critique Journal and website, they encouraged people to be discerning thinkers who seek to love their neighbors well.

I discovered them in my late twenties and was influenced by their work. But mostly it was Margie’s newsletters, with family and ministry stories that she sent to their supporters, that God used to help me learn more about grace and his love. I have been reading her work since then, and getting to know her as a dear friend and having Square Halo Books publish her memoir trilogy has been a sweet gift.

The Exact Place: A Memoir is a book teenagers and adults will enjoy—I have led book groups with both young people and women friends and everyone has been glad to have read it. My mother couldn’t put it down. It is funny and sad and bittersweet—and worth getting to the end.

About The Exact Place:

This first book in the Place trilogy begins with a large family crowded into a three-room farmhouse with no running water on swampland barely reclaimed from the Minnesota wilderness. It was a raw place where temperatures of 40 below could freeze a chicken coop full of hens. Margie’s roots were tangled by the loss of her father and the desire to win her step-father’s love. But at the same time, a deep-rooted sense of purpose and place was awakening in her. The Exact Place is a beautifully-written reflection on real life that is both heartbreaking and funny, with a keen eye for detail that gently unmasks the truth.

From The Exact Place: Riding Lessons

Thunder was another horse I valued, for he had a gift for amusing us; we wouldn’t have traded him even for a television set. Thunder was a tawny brown and white gelding with a sense of humor and more brains than some of our neighbors—at least that’s what Dad said. Thunder opened so many gates and unlocked the barn door so many times, Dad had to keep inventing new ways of securing them. The back barn door, which led to the pasture, had to be latched with a leather strap from the inside. If we forgot to close it properly, Thunder always found out because he checked on it several times a day. He would turn the handle on the outside and nudge the top half of the door open. Then he would reach down over the bottom door and unlatch the inside hook. Backing up, he would pull the door open with his head, stroll through the middle of the barn and out the other door into our backyard.

Escaping the pasture didn’t mean a better life; he had all the space and care a horse could want on the inside, including all his pals. It was the challenge that attracted him. When he got out he usually headed for Mom’s garden, where he trampled cucumber vines and ate sweet corn. Then he would run along the outside of the fence making the other horses concerned and jealous. They would cry out and gallop back and forth. We enticed him back with oats in a three-pound tin coffee can. That was his downfall: he just couldn’t resist the musical sound of oats being jigged in a can and always came for them, snorting and blowing, his lips reaching for the treat.

One day when Mom and Dad were gone, Randy and I were entertaining ourselves with him, and he always enjoyed the attention. At one and a half years he was big, but still too young to ride, so we had him in a halter and lead rope because he was starring in our Wild West Show. We pretended he was a wild mustang, an Indian pony we captured, and only we had the power to tame such a tremendous beast. We led him to the center of the corral so the crowd (our younger brothers and sisters sitting on the fence) could get a good look at him. We trotted him as fast as we could run around the ring to show off his beautiful legs and carriage. We climbed to the top rail of the fence and flopped our bodies across his back like a sack of grain. We pretended there were cheers when he allowed us to handle every part of his body. We picked up his hooves and cleaned them. I braided his mane and tail. He patiently endured as we bent his ears back and forth awkwardly and took his halter on and off about a dozen times.

It suddenly occurred to me that bringing him into the house might offer some new diversion. We could pretend he was a member of our family, like the Arab sheik in Ben-Hur, who kept his Arabian horses in his tent. To our surprise, Thunder was eager to climb the steps of the back porch and enter the kitchen. Although the floor proved hazardous as he slipped on the smooth linoleum, he merely regained his balance, and continued his inspection of this new space. We already knew he loved people food. He ate anything he could persuade us to give up: watermelon, cake, cookies. He’d never tried Mom’s dill pickles so we got them out of the refrigerator to see if he liked them. To our delight, he crunched down half a jar of cucumbers and left a huge puddle of drool on the floor before we led him back outside.

The next time Mom and Dad went to town, they were barely out of the driveway before  Randy and I brought Thunder and Patsy into the house. Thunder felt even more at home this time. When he saw the eight loaves of bread Mom had just baked, still cooling on the table, he took an enormous bite from the center of the nearest loaf. Above the laughter and shouting, I yelled for Rex to hurry up and get out the dill pickles to distract him from the bread. Like a dog, Thunder followed him toward the refrigerator. He was so impatient to eat one, he knocked the quart jar out of Rex’s hand. It broke, sending glass, pickles, and juice flying across the floor. I handed the lead rope to Randy and told him to take Thunder into the living room while I cleaned up the mess. Rex took Patsy, who, as a pony, was smaller and theoretically more manageable, but as the two horses turned together in the small kitchen, they lost their balance on the slick floor. In a cartoon scramble of Bambi on ice, the pony fell down, but Thunder emerged from the chaos and headed for the living room.

Randy led him past the large mirror hanging above our old waist-high wooden radio. Staring at himself in the mirror, Thunder saw someone he did not like. He laid back his ears and bit the top of the radio, leaving four deep teeth marks in the wood. The scars Thunder left on the radio sobered us for a moment, so we quickly got the horses out of the house, cleaned the mess on the floor, divided and ate the one loaf of bread, flopped down in the grass to laugh, and then swore our younger brothers and sisters to secrecy, telling them we would beat them up every single day their whole lives if they ever told Mom and Dad what we did. Later, when Mom noticed the deep scratches on the radio, none of us knew how they got there.

The horses seemed to enjoy their trips into the kitchen as much as we did. But one evening when we were eating supper, I decided we’d better quit. Thunder had opened the gate and escaped from the pasture. No surprise. He trotted up to the porch with one of his pony sidekicks. They both placed their hooves on the top step of the porch and peered into the kitchen through the screen door, waiting for pickles and bread. All of us kids froze. Rex began to grin, and Jan put her hand over her mouth to stifle a giggle, while I scowled ferociously at them. Dad was surprised but laughed.

“Look at that, would you?” he said. “Looks like they want to come right inside.” 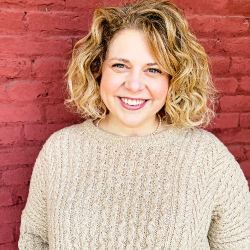 Leslie Bustard
Leslie Bustard lives in a century-old row home in Lancaster City, PA with her artist husband Ned. Here they raised their three daughters and collected a lot of artwork, music, and books.

Wild Things and Castles in the Sky: A Guide to Choosing the Best Books for Children, published through Square Halo Books, is her first book, which she co-edited with daughter Carey and friend Théa Rosenburg.

You can find more of her writings, ramblings, and loves at PoeticUnderpinnings.com.