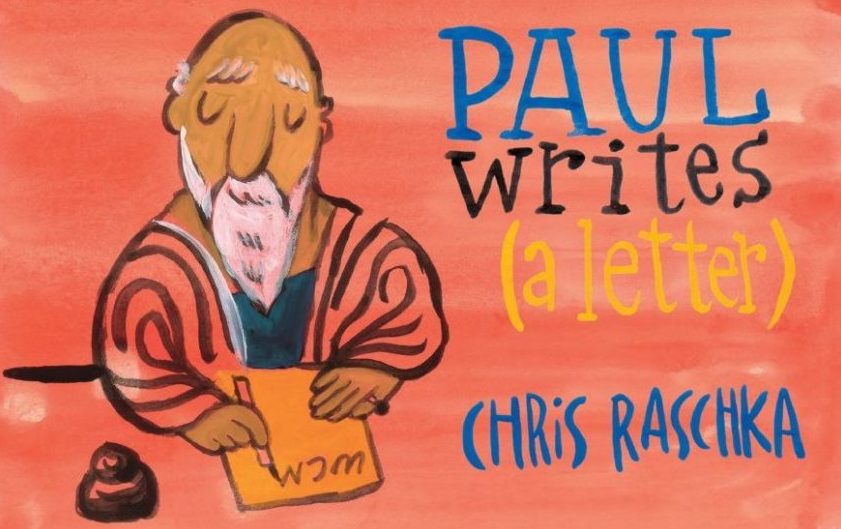 I’ve been aware of the work of author and illustrator Chris Raschka for some years, so when I saw that he had just published a picture book based on the New Testament letters of Paul, I knew I had to check it out. I’ve had it in my home for a few weeks, occasionally picking it up and mulling over it and thinking about the art, the story, how it works together, and how it helps me think about Paul. The book is called Paul Writes (a Letter), published by Eerdmans Books for Young Readers in 2018. Its structure is simple; each two-page spread focuses on one of Paul’s letters (including Hebrews, with a note explaining that biblical scholars are divided on the question of its authorship). This was a great reminder to me of the sheer volume of Paul’s writings; I kept turning pages and being surprised at how many letters there were! A map of Paul’s travels and important cities on the book’s endpapers also helps illustrate how widespread his influence was.

The first thing I noticed about the book was the quirkiness of the title. I do appreciate a well-placed parenthesis, and an interview that I watched with Raschka shed some light on the choice. He recalled being in church as a child and often hearing the phrase “Paul writes,” inevitably followed by a lengthy Scripture passage, which never held his attention as much as the question of who this “Paul” person was, and why he was writing. In adding the phrase (a Letter) to the title, Raschka was hoping to remind readers of Paul’s realness; Paul was a real man, writing real letters to real people.

The illustrations serve to emphasize this point as well. In beautiful bold watercolors, Paul is pictured on each page spread, sometimes gazing thoughtfully into the distance, sometimes scribbling intently—and on my favorite spread, munching on a biscuit—but always with pen and paper close at hand, focused on his letters. The text is written in the same vivid watercolor as the illustrations, with key words emphasized in primary colors. The text flows around the illustrations, which I loved; it seems to make each spread cohesive and whole, rather than segmented or divided between the words and the pictures.

I think it’s important to note what Raschka is not doing here. The book text is not a Bible translation; instead Raschka has chosen four to six verses from each of Paul’s letters, referenced them at the bottom of the page, and loosely summarized them in simple language, easily understood by the intended preschool-aged audience. He includes many of Paul’s greetings to his friends, and always closes by signing Paul’s name. The book is not particularly Gospel-focused. A brief introduction explains that Paul came to believe in Jesus and traveled to tell people about that, but the verses chosen for the text are mostly focused on how the people Paul is writing to should treat each other. A 40-page picture book is never going to cover all the intricacies of Paul’s writings; instead, what Raschka has chosen to focus on is Paul’s humanity, his relationships, and how his letters have influenced our world. I might wish for a bit more of Paul’s passion for the Gospel to be conveyed in the text, but overall, I appreciated the way that Raschka’s focus helped me to think about Paul as a person and as a writer. I’ll be looking to share this picture book with my young friends as a simple introduction to the man who wrote so much of the New Testament.