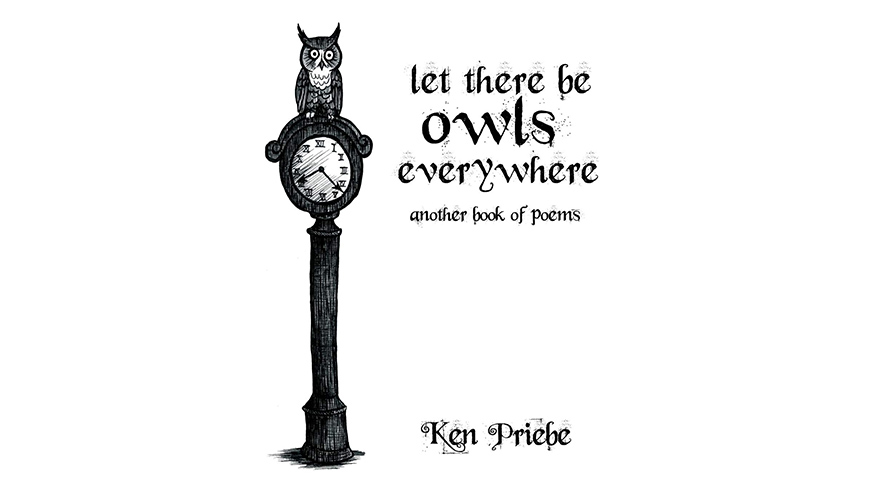 When is a collection of poetry more than words and rhymes? When it’s a book from illustrator and poet Ken Priebe, it’s likely there are also going to be unforgettable characters, puns and wit galore, and a lot of great memories being made by young people and families as they turn the pages together.

Priebe’s first collection of poems, Gnomes of the Cheese Forest and Other Poems

was a treat for families to enjoy together (I’ll vouch for that out of my family’s personal experience), and now I’m delighted to recommend Priebe’s new book of poems, Let There Be Owls Everywhere: Another Book of Poems

. Comprising over 100 pages of wild, whimsical, and sometimes weird creations, Owls is a fun, fantastic journey which positively begs to be read aloud, and invites families to return to its pages again and again for joy and wonder.

What do I mean? Here’s an example: in our house, in the midst of our page-turning, we’ve been known to stumble upon the page containing the 15-line poem “Dumpy Tree Frog,” accompanied by Priebe’s ink illustration of the titular frog. There’s a moment of silence as we absorb the drawing, then a few snickers as we keep staring, and finally, good, old laughter at this petulant little character next to his own poem. To paraphrase Nietzsche, sometimes you stare at the frog … and the frog stares back.

The same happens when we reach “The Only Clown Left,” and the lonely little clown, left “with nobody to entertain” peers forlornly out from the page. Priebe’s illustrations are so full of life that whether they’re placed atop a canvas of white space, or as part of a double-spread crammed full of details to pore over like an “I Spy” book. “Which owl’s your favorite?” we ask each other as we glance over a dozen different varieties, each with its own personality. These aren’t just poems; they’re friends. Whether it’s “The Lonely Q,” or Bob McFlannigan-Dannigan-Dee (who “fell in a bush and got stung by a bee,” if you were wondering), or the nefarious “Djoomin-Djinn,” there are plenty of friends to catch your eye in this book.

In addition to the characters, there’s oodles of delicious rhyming and soundplay, such as in the poem “Waiting in Line,” which opens:

The pelican ponders, the mouse’s mind wanders,
the owl orates with the yak,
all while the goose guzzles milk with the moose,
and the sidewinder snake has a snack.
The squirrel sips tea with a young chickadee,
the penguin plays chess with the cat.
The sheep combs her wool, while the cow and the bull
are having a spirited spat.

The most eye-catching segment of the book is the 24-page narrative poem “The Hunt for the Horrible Hickle-Snort.” Told in four acts, the poem follows three brave adventurers: Sir Thadwick Binkle, his first mate — a badger “with an overgrown incisor” — and his second mate Blair, as they set out to hunt the aforementioned Hickle-Snort. Told in six-line stanzas with plentiful accompanying illustrations, it’s the sort of epic quest one imagines a roving minstrel hundreds of years ago sharing as he burst into town and played for his supper. If that minstrel were Jim Henson, or perhaps Roald Dahl, that is.

From the illustrations to the poems, Let There Be Owls Everywhere is a book of wonder. It’s like a poetic potion cooked up in a lab with no regard for what’s “safe” or “normal.”

You know what? Normal is overrated. Let there be owls! Everywhere!

He lives with his wife, two boys, and a cowardly dog in a small town in Western New York that’s pretty much Mayberry. He wishes he could play the banjo, and is either eating a pie right now, or thinking about it.