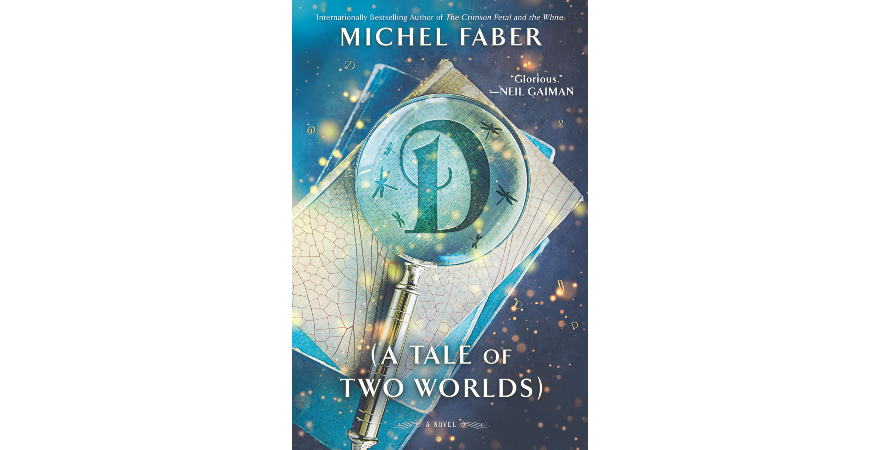 The hidden-picture nature of this engaging middle-grade novel accounts for some portion of its appeal: Can you spot the echoes of Charles Dickens, C.S. Lewis, Madeleine L’Engle, Lewis Carroll, and J.K. Rowling? (Not to mention a host of others with whom I’m likely unacquainted. Literary influences cited by the author alerted me to The Wonderful O, by James Thurber, which I plan to investigate soon.)

D’s protagonist, Dhikhilo, is the adopted daughter of a British couple who make limited appearances in the narrative. The fact that Dhikhilo is born in Somaliland and the presence of immigrants and travelers in her seaside town introduce a diversity theme that carries over into the fantasy realm of Liminus.

Dhikhilo enters this persistently wintry world through an attic portal after a few brief chapters of biography and backstory. The courage and clever thinking by which Dhikhilo overcomes obstacles led me to suspect the book’s message would revolve around the central importance of such character qualities.

A biblical worldview maintains that, while we strive to nurture knowledge, moral fortitude, and self-reliance in our children, these are not sufficient in themselves. It intrigued me, therefore, that in her moment of mortal danger, Dhikhilo owes her deliverance unequivocally to a supporting character. I’ll avoid plot spoilers, but this character’s identity and significance to the story merit some discussion.

Other aspects of the climax, which takes place in Liminus’s capital at what is essentially a political rally, bear consideration as well. Dhikhilo observes, of the hungry populace enticed into attendance by the promise of food, that “they didn’t look very smart.”

Such a statement suggests a host of questions. What exactly constitutes “not smart”? Is it a value judgement or a neutral description commensurate with “they all had red hair”? Questions about causation and responsibility arise as well. If being not smart is suggestive of a fault, where does that fault reside? With the individuals? Their parents? Their genetics? The education system? Uneven distribution of some privilege that might contribute to smartness?

D does not, it seems to me, suggest answers to these questions, allowing for genuinely open discussion.

I found the overall effect of the novel less potent than Lewis’s classic to which it owes so much. Nevertheless, D has much to recommend it, not the least of which is the air of mystique and seasonal charm that pervades the opening chapters.

Other story elements intrigued me but will be more profitably discussed by readers than discoursed on by a commentator. In a break with previous practice, I offer a few potential discussion points below:

A.C.S. Bird
Amanda Bird is a writer and editor. She lives just outside Eugene, Oregon with her husband, teen daughter, a dozen chickens, and a small flock of pigeons. She reviews a wide range of books at https://birdsbooks.peregrines.net/.
Latest posts by A.C.S. Bird (see all)