Laika (pronounced Like-ah) wasn’t the first dog sent into outer space, but she was one of the most, if not the most, famous cosmonaut dog. Owen Davey’s Laika: Astronaut Dog introduces kids to this canine hero who helped test the possibility of space travel.

The book begins with a stray Laika roaming the streets of Russia. Grey tones in the illustrations enhance the bleakness of her street life, and her facial expressions and body language project her sadness when people reject her. Despite the simpler style, hope radiates from Laika’s eyes and smile as she wishes on the stars for a family. The story then progresses to her meeting a scientist, who chooses her for a “very special job.” Laika goes through tests and then, with chin raised, poses in her space garb. The red in the pictures give off auras of vigor and heroism. Her smiling and waving as she takes off in her space capsule has a whimsical touch.

Other whimsical features are interlaced in the illustrations. A moon smiles down on the meeting of Laika and the scientist, and animals all over the world watch Laika as she orbits the globe. What’s interesting is that you see pigeons throughout this book, and kids would have fun trying to find the pigeons like they’re reading “Where’s Waldo?”

What happens to Laika? Her spaceship goes awry, and mission control loses contact with her. The people think they lost her, and even the scientist who found her in the streets sheds a tear. “But Laika was not lost at all,” the book says. “Laika had been found.” She gets taken away by an alien family, the very family she wished on the stars for.

At the back of the book, there’s a photograph of the real Laika and the following note by Davey:

“On November 3, 1957, Laika became the first animal to orbit Earth when she was launched into space in the Sputnik 2 rocket. A few hours later, Laika’s space capsule malfunctioned. Though many think Laika perished, this story, with its happy ending for the brave little dog, is the one I choose to believe.”

While an ending like this may be happier, the real story is grim. According to Russian scientist Dr. Dimitri Malashenkov, Sputnik 2 was in orbit for a few hours. But because scientists didn’t take the time to test Sputnik 2’s temperature control system, it overheated, killing Laika. It stayed in orbit for five months, carrying a lifeless hero, then fell back to Earth. If you want to read more, check out “Ten Tragic Facts About Laika, The First Dog in Space (https://listverse.com/2017/01/14/10-tragic-facts-about-laika-the-first-dog-in-space/)” and Britannica’s “Laika (https://www.britannica.com/topic/Laika).”

The historian side of me begs parents to teach their children the true story of Laika before having them read Davey’s story. Not only would they hear the truth, but they may also learn to understand the ugly side of history. An ugly side where scientists used an animal’s life to help pave the way for space travel.

Suppose we romanticize every historical event so that they’re all happy stories, and those are the only versions we tell young people? What if we make up an ending to Anne Frank’s story and say she was whisked away by fairies instead of dying in a concentration camp? What if we cover up the hardships surrounding pre-Civil War slavery, the Civil Rights movement, September 11th, or even Biblical stories so they’re not as disturbing or sad? Then young people would not fully appreciate the hardships people went through and learn anything from them. Including not making the grave mistake of neglecting to test equipment at an animal’s expense.

I do understand why dog lovers would want to end a story like Laika’s with a happy ending, though. Would I send my puppy Maggie into space in an untested spacecraft? Absolutely not. Watching my last dog, Zoe, be put down when she got old and sick was tough enough. And telling the full scope of Laika’s space mission might be upsetting to small children, so it would be better to tell them the true story only when they’re ready.

Maybe Davey’s desire to change the ending can lead him (and us) to the ultimate Changer: God. God plans and promises us He will create a new heaven and a new earth, a place where “death shall be no more (Revelation 21:4).” In the meantime, the whole creation is groaning for the salvation of God’s people. “For the creation was subjected to futility, not willingly, but because of him who subjected it, in hope that the creation itself will be set free from its bondage to corruption and obtain the freedom of the glory of the children of God (Romans 8:20-21, ESV).” But when that comes, He will eliminate every pain, sadness, even death. And just as Laika in the book lives “happily ever after” with the family she wished for, we will live happily ever after with the family we’re meant to have: God’s family. 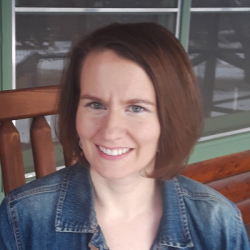 She enjoys writing about young heroes, their travels, and their talking animal friends. She wants her readers to have fun in a fantastical world while encountering God-honoring themes. Besides creating stories, she likes reading, drawing, coffee, and being with her Corgi, Maggie.