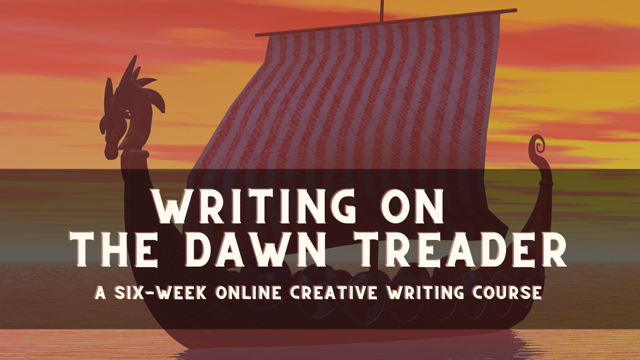 NOTE: TOMORROW, January 25, 2022 Jonathan Rogers is returning to Narnia for the next installment of his “Writing with…” series of online classes. In Writing on The Dawn Treader, Jonathan will walk writers through The Voyage of the Dawn Treader, examining the specific tools and methods by which C.S. Lewis achieves his particular kind of magic. Then, in weekly exercises, writers will apply Lewis’s techniques to their own storytelling.

Find out more and register at TheHabit.co/Voyage!

(But first, read on for a sample of Dr. Rogers’ wit and insight.)

If you’ve read The Voyage of the Dawn Treader, think of a few adjectives you would use to describe the Eustace Scrubb we meet at the beginning of the book (not the new and improved Eustace Scrubb in second half of the book, after the dragon episode).

Your list of adjectives probably included some of the following (or synonyms thereof):

But if you search The Voyage of the Dawn Treader (on a Kindle, for instance), you won’t find these adjectives applied to Eustace. (Nor, I imagine, will you find many of the other adjectives you might have put on your list.) When you read The Voyage of the Dawn Treader, you judge Eustace to be selfish, mean-spirited, insecure, ignoble, etc., even though C.S. Lewis never uses those descriptors. So how exactly does Lewis engage and direct the reader’s judgment?

Showing and Telling
Our answer is closely related to the well-worn distinction between showing and telling. Lewis might have simply told us on the first page, “There was a boy named Eustace Clarence Scrubb, and he almost deserved it because he was selfish, prideful, mean-spirited, unreflective, insecure, ignoble, annoying, cruel, cowardly, and pusillanimous.” That would have been a bad case of telling; it would have short-circuited the reader’s judgment altogether.

The Voyage of the Dawn Treader starts with three pages of exposition, which is technically a kind of telling: Here are some things you need to know before we really get into the story. Exposition is a quick, efficient way to introduce characters and situations. It can be tempting, therefore, to trot out the adjectives. There is no quicker way to introduce characters, after all, than to apply adjectives to them.

But even in his exposition, Lewis gives the impression that he is showing rather than telling, and in so doing he engages the reader’s judgment. Consider this passage from the opening paragraph of The Dawn Treader:

There was a boy called Eustace Clarence Scrubb, and he almost deserved it. His parents called him Eustace Clarence and masters called him Scrubb. I can’t tell you how his friends spoke to him, for he had none. He didn’t call his Father and Mother “Father” and “Mother,” but Harold and Alberta.

Lewis accomplishes a lot here just by giving a quick rundown of who gets called what by whom. We start with that joke about a kid who “almost deserved” his name. But besides being a joke, that opening sentence predisposes the reader to judge Eustace harshly. A couple of sentences later, we see that Eustace is friendless. But before we can start feeling sorry for him, we see that he’s the kind of kid who calls his parents by their first names. Consider how much freight that little detail carries. There isn’t any adjective for that. But when, in the next sentence, we are told that the parents are “very up-to-date and advanced people” (up-to-date and advanced are the only adjectives on the whole first page), we know to take those typically positive adjectives with a grain of salt. They are up-to-date and advanced in the way that leads to children calling their parents by their first names.

The parents are also vegetarians, non-smokers, and teetotalers. Many of you reading this are non-smokers and teetotalers, and perhaps even vegetarians, but still, you know not to approve of these parents, and I suspect it has a lot to do with the fact that they let Eustace call them by their first names. As I said, that little detail carries a lot of freight.

Likes and Dislikes
Lewis also makes much use of Eustace’s likes and dislikes. If you write fiction (or even, perhaps, narrative nonfiction), this is a relatively easy trick that can punch up your characterization considerably. Eustace likes all the wrong things. He likes beetles, but only if they are “dead and pinned to a card.” He likes books, but only books of information, not books like The Voyage of the Dawn Treader. When he’s offered a flagon of spiced wine, he asks if he can have Plumptree’s Vitaminized Nerve Food instead—and can they make it with distilled water.

Lewis puts us alongside the Pevensies and Eustace in a world of marvels and delights. Eustace’s failure to delight in the delightful is a major trigger for the reader’s judgment.

Opening Gaps Between Interpretations of Reality
Finally, Lewis engages the reader’s judgment by opening up gaps between interpretations of reality, thereby requiring the reader to judge which interpretation of reality is more accurate. One way to do this is simply to have characters in dialogue disagree on what is true, as in Chapter Two, when Eustace is feeling seasick:

Eustace, very green in the face, scowled and asked whether there was any sign of the storm getting less. But Caspian said, “What storm?” and Drinian burst out laughing.

“Storm, young master!” he roared. “This is as fair weather as a man could ask for.”

The reader knows to trust the sailors’ assessment of the weather over Eustace’s. More to the point, we are beginning to judge that Eustace’s self-centeredness may be closer to solipsism: If I am experiencing seasickness, we must be in the middle of a storm.

So much for creating a gap between different characters’ interpretations of reality. Another, related technique is give the reader a clear sense of “reality”—that is, the reality of the story—and then to create a gap between that reality and a character’s interpretation. One way Lewis creates this gap is by giving Eustace a journal. We observe life on The Dawn Treader, judging for ourselves what things are like, then we read a completely different interpretation in the journal.

I’ll just give one example. When Eustace and the Pevensies come on board The Dawn Treader, the lodgings have to be rearranged. Caspian gives his cabin to Lucy and, instead of exercising his privilege as king, lets his mates Drinian and Rhince keep their cabin on-deck and takes a less desirable cabin below deck, along with Edmund and Eustace. Furthermore, he gives the bunk to Eustace, slinging hammocks for himself and Edmund. It’s a noble act of self-sacrifice. Eustace doesn’t come out with the best accommodations, but his accommodations are slightly better than those of the King of Narnia.

Needless to say I’ve been put in the worst cabin of the boat, a perfect dungeon, and Lucy has been given a whole room on deck to herself, almost a nice room compared with the rest of the place. C. says it’s because she’s a girl. I tried to make him see what Alberta says, that all that sort of thing is really lowering girls but he was too dense. Still, he might see that I shall be ill if I’m kept in that hole any longer. E. says we mustn’t grumble because C. is sharing it with us himself to make room for L. As if that didn’t make it more crowded and far worse.

Jonathan Rogers
Jonathan is the author of several "fantasy adventure stories told in an American accent:" The Wilderking Trilogy (The Bark of the Bog Owl, The Secret of the Swamp King, and The Way of the Wilderking) and The Charlatan's Boy.

His non-fiction books include The World According to Narnia, Saint Patrick, and The Terrible Speed of Mercy: A Spiritual Biography of Flannery O'Connor.

Jonathan is also the proprietor of The Habit, an online library of teaching resources and hub of community where like-minded writers can connect, discuss, and give one other just a little more courage.