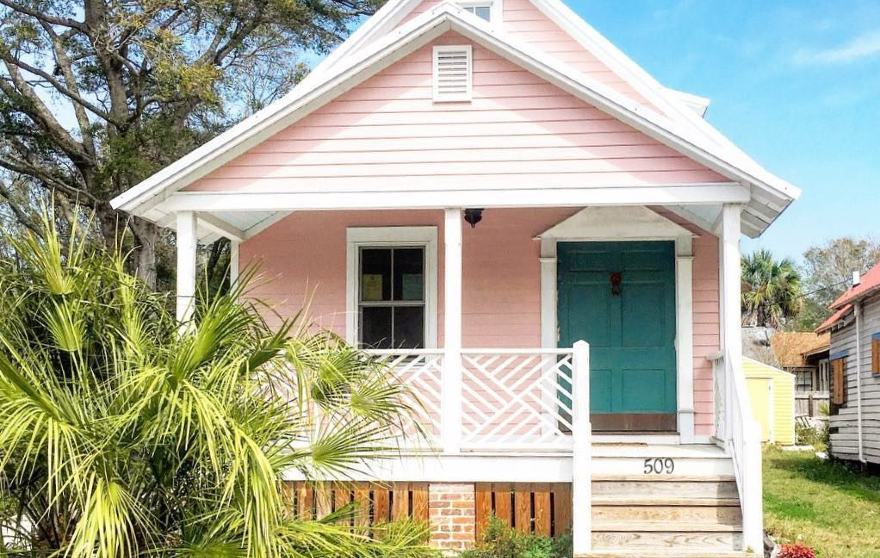 My grandparent’s house has been pink for about as long as I can remember. Nestled in a quiet neighborhood, only a few doors down from a church with a bell. The house had a palm tree in the front yard and a giant evergreen near the garage that seemed perennially a home to an owl. I always used the back door. In fact, anyone who was there for more than delivering a package or asking for candy on Halloween (which coincidentally is my grandmother’s birthday) –anyone who should actually come inside would go up the driveway and come up the stairs to the backdoor. This was so established that my childhood self was confused by this. Surely the door most used is the front door, no matter which one faces the street.

I love that as a grandson I was always welcome there. If I cast myself back into my memories, I can feel that moment of entrance: The little entry room where the dogs slept and the washer and the dryer might be gently humming. On the left was a pantry that likely stored some sort of treat. There was a door that lead to the master bedroom, and straight ahead the kitchen—wherein lie a true cookie jar. Over the years little things changed, paint or appliances or decorations, but always the first thing that a guest would see was that classic white gas oven unit, and by the old window a round table with four chairs, and a fridge. Behind you then was a spice cabinet built into the wall. A couple small dogs were likely jumping up at your feet, or perhaps out in the spacious dog pen beside the garage. Over the sink was a small stained-glass decoration which declared the truth: My grace is sufficient for you, for My strength is made perfect in weakness.

Do you feel it now? You’ve crossed the threshold. Welcome! Be blessed and forget your restlessness. Through the kitchen were the dining and living rooms, but we’ll leave those for another day. Come and sit in the kitchen, by the table with a handcrafted quilt. Perhaps my grandmother is sewing in the other room, or perhaps she is gardening out by the quince tree. My papa—I miss my papa—perhaps he’s working in the little woodshop that stares out on anyone who parks in the drive. Maybe he’s watering the tomatoes he’s growing out by the barn. Yes, let us come and be honored by our loving hosts.

That house brought the best of its generation to me. But of course it wasn’t the house, it was the people. My grandparents are good Christian folk. They weren’t always—none of us are. My grandma doesn’t talk much about her youngest years, when she and her brother Johnny, whom I never met, and her sister Elaine were bounced about a few foster homes. My papa grew up farmer, and spent some time in the military—he struggled with alcoholism long before I knew him, back when my mom was close to the age of my now three-year-old daughter. Then one day, after who knows how long of declining my grandma’s invitations to church, he decided, uninvited to go.

Something happened, and he gave his heart to Christ. Not in some cheesy, trite way—but the way some people think doesn’t exist: miraculously. To some people a house will always just be a house, but that house on Oak street is proof that houses are meant to be homes. Yes, my papa and my grandma are good Christian folk, and though I could not sense it then, there was a Third who lived across that threshold.

I realize this now because one day when I was too young to understand the treasure I found, I found Jesus. It happened something like this: My brother and I were playing in the front yard, when my brother wanted to go inside. I didn’t want to go inside, and I didn’t want him to either. I didn’t want to be alone. Sticking his shovel into the dirt one more time he found a clever solution. I didn’t have to be alone. I could just pray and invite Jesus into my heart, and boom! Never ever alone again.

That sounded like a pretty good deal to my young, young self.

Is that really how it went? Then why do I have this image of seeing myself running up those back steps to tell my parents. How could I remember seeing myself? Is that when I met Christ? Is that the first time? Did I cross the threshold?

My brother must have thought he was clever in that moment—I don’t know. Did he lead me in some childlike version of the sinner’s prayer? Does it count if you don’t know what you’re actually doing—or perhaps I knew best then.

Now I look again not with memory, but imagination. I see a good Man, who lived in that home as well, walking down those steps and greeting me. I, being a child, would likely ask who he is.

But I wouldn’t understand. I thought this was my grandparents’ house.

“Well, yes, but I live in their hearts. It is I who gave them this home, that they could live happily ever after—and with me.”

What would I say then? Surely something beautifully naïve. Maybe I would simply say: “I don’t want to be alone.”

“Would you like me to stay with you,” He would ask.

“Yes please, stay and play and keep me company.” And then I would start scooping dirt for a few more minutes, I suppose. He sits beside me and scoops dirt as well, rejoicing with me.

I marvel now, that so much power could be held in such a gentle moment. Salvation is not a quiet act. It is the first, great climax—the first thing that truly matters. It is the warhorns and the stamping of saddled beasts. It is the uncapping of mountains, and stars falling, and the pounding feet of a father who races to save his son—”I’m coming son! Just hold on! I will always come!” It is the cry of an absolutely righteous man on a cross.

Salvation is not fiction, not imagination, not childlike memory, it is a threshold as real as my family, as real as that house which is shortly to be sold, a house for another—and hopefully a home. It’s as real as my papa who crossed the threshold suddenly, violently. The firemen were pounding on the front door—they didn’t know any better. By the time I aroused my groggy self and went to get the front door, they learned better and ran to the back door.

There in the kitchen, they found my papa, suffering from a stroke. I shivered on that old couch and tried to understand this new world I awoke into. So much of the rest is a blur. He had lung cancer. He had smoked decades ago, it shouldn’t have mattered, but I suppose it must have. He died a couple of weeks later. I was not there in the final moments, but still I can hear the great lament of my grandma, who lost the love of her life. That threshold, death is real—almost as real as home.

I comfort myself, and not naively, that my God has broken the back of death. My God crossed that threshold himself, and he returned. Surely Jesus could have healed my papa—but then, that’s exactly what He did. My papa runs ahead, and to him it is a foolish question to ask, “Is there a God?”

But this essay isn’t about my papa. It’s not about me either. It’s about homes and thresholds—hosts actually. I don’t live on Oak street, but I love where I live. I have a front door and a back door, but I use the kitchen door most. I have a sloping yard, which runs down into some wetlands. In my garage are old carpenter’s tools, and I try my best to be worthy of the trade. I look up and see the sign, “Holy, holy, holy is the Lord God Almighty, who was and is and is to come.”

Every room in the house has something that I have made, and indeed it is true: our family has grown into that space. We gather around our own table, and pray a blessing for good food. I’ve met some of the deepest moments of grief on my own couch, shivering uncontrollably, or weeping for sorrow. I’ve also met Jesus here, and been healed too. One day He waited just outside the garage, and my then three-year-old son said, “I see Jesus.” I blinked and blinked, and at last I believed my son, rejoicing with him.

This is my home, and if you want, you may come and sit at my kitchen table. Beside me is my wife, and my children run all about squabbling and laughing, behind is my papa, and everywhere, every square inch beyond and before the threshold, Jesus. Not one board, not one pane should remain unblessed. Perhaps you don’t believe yet, but respect the host. Let yourself be feasted and treated to tea or coffee, and rest in the echoes of all our prayers. Rest better in my God’s loving whisperings. For the host is who makes a house a home, makes it a place worth living, really. 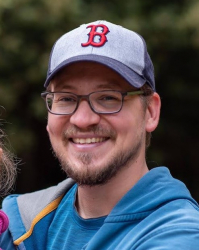 Dillon Mee
Dillon has recently been described by his graceful wife as a jack-of-all-trades, and for better or for worse he can’t disagree. He teaches high school literature and theory of knowledge during the day. The rest of the time he enjoys his family—which includes trying to keep up with his three kids—and loses himself in a multitude of creative projects.