Around the Web:
Why You Need to Believe the Impossible

Kris Camealy writes at her blog a post inspired by a book titled Playdates with God, in which the author writes, "When did my imagination become so small that I stopped expecting the impossible?" She's tired, she's wrung out, and she's realizing on a walk through the yard, all the impossible things right there around her.

As she wanders, she realizes that the God she's been looking for has been there all along.  Read more.

Where Stories Come From

Our friend and author Sally Lloyd-Jones takes a look at where stories come from.

Sally goes on to ask what it might look like to follow—and let God lead. Read more.

Restless till We Rest in You

I love Church history. I recently got into a discussion about it with a friend who had found it boring when she studied it in school. We come from different faith traditions and she said, "Perhaps you were taught differently. To me Church history was just one Heresy after another." I thought later how sad it was that she hadn't been taught the richness of the history of the Church–the voices of the men and women through the ages who have shaped and impacted how we worship today. One in particular that I love to read and study is Augustine of Hippo. At The Cripplegate, Mike Riccardi writes about Augustine's source of joy.

I can't help but think of C.S. Lewis' thoughts on sehnsucht. Read more.

3 Ways to Prepare Your Teenager for Adulthood

There's no foolproof way to parent. Anyone who has had more than one child will tell you that there's not even one foolproof way to parent within a family. Every kid has a unique personality and a unique set of challenges to face. However, some advice is helpful–particularly when it comes from Scripture. At Crosswalk.com, Brian Croft writes about a tradition he and his wife have of taking their 13-year-olds on a special day trip, and he shares some of the things he talked about with his son.

Jonathan Rogers shares of his brief career as an art student—in which budding genius may have been nipped by an imposing teacher.

Martin Luther writes of the connection of art and faith. Paul Boekell puts it into a piece of art.

Introducing "Tales of the Restoration"

Laura Peterson introduces us to Tales of the Restoration, the conclusion of the story of Hero by David and Karen Mains

Looks like a great read — read the whole review!

A Poem Advising Bad Children To Not Be So Bad

Split infinitive in the title and all, we present a fun little poem from Hilaire Belloc:

Over at the Artful Parent, they've got instructions for some fun paper / leaf sun catchers. A good one to try this time of year!
Read more.

This film is breathtaking—sometimes because of the beauty and sometimes because you're getting a first-person view of a mountain biker riding a knife's-edge ridge on the Isle of Skye. But, oxygen deprivation and all, it's worth it: 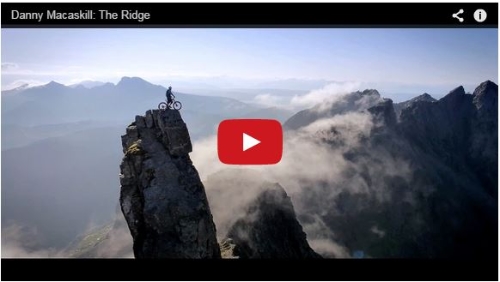