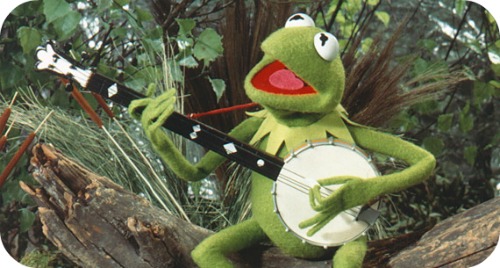 One of the most transformative cultural moments of my young life – though I didn’t know it at the time – involved a frog in a swamp.

In the opening seconds of a movie I watched countless times as a child, the credits flicker onto the screen as a helicopter shot opens on a long shot of a woodsy swamp drenched in morning sun. We’re so far away that the trees are all that are visible at first, but the camera dips closer and closer, eventually zooming into the midst of the woods, down to the swamp surface. The green water is still, the Spanish moss curling from the trees at the fringe of the frame.

At first, we don’t know what we should be focused on. But then, as the camera floats across the surface, a small frog becomes visible. He’s perched on a log, right leg bent, left leg straight ahead of him, steadily plunking out the accompaniment to a simple melody on a banjo he holds.

“Why are there so many songs about rainbows? And what’s on the other side?” he asks. “Rainbows are visions, but only illusions. Rainbows have nothing to hide.”

And so the song goes, on to its conclusion, with words so wistful and lovely, they haunt me still:

“Have you been half asleep, and have you heard voices? I’ve heard them calling my name. Is it the sweet song, that calls the young sailor? The voices are one and the same. Someday we’ll find it, the rainbow connection, the lovers, the dreamers and me.”

That moment, embedded in my consciousness, did what all exceptional moments of cultural progress do, whether personal or societal. They “expand the horizons of possibility,” as Andy Crouch calls it in his book Culture Making, by adding something significant to the culture in a way that makes something new possible, begetting other cultural artifacts, and so on, and so on.

For me, expanding my personal horizons of possibility went something like this:

If a frog puppet can play a banjo in a swamp, and make me feel like I can take on the world, I thought, then anything is possible.

Yes, a frog in a swamp changed my world.

I had a similar experience years later in college, when a fellow freshman handed me a copy of the Michael Ondaatje novel The English Patient. My teen years prior to college had begun with The Hardy Boys and ended with John Grisham and Michael Crichton. If it wasn’t about plot, it didn’t matter. I was riveted to page-turners, following the twists and turns of plot like a rider on a roller coaster, gripped by every stomach-dropping moment.

But Ondaatje’s book represented something new. In his words, I saw a new world of possibilities unfold delicately like a flower. Here was language that engaged the senses, that evoked and suggested, rather than told, and most of all, was so lush and haunting it was more than simply an intellectual exercise. It penetrated deep, making me feel and wonder.

Again, my horizons of possibility were expanded.

I didn’t know books could do this, I remember thinking.

Whether it’s through images on a screen, or words on a page, or words read aloud, this is what transformative cultural experiences do – they expand the horizons of possibility for us, revealing to us that there is more to the world, and more to ourselves, than we once thought possible. They inspire us to create, and reveal more challenging and meaningful steps to be taken in our own lives. And, perhaps most importantly, these experiences awaken longings for The Other, the world of God’s Kingdom, so we hunger for it with every ounce of our beings.

And that matters. Because once you’ve experienced the view of that type of horizon, it’s hard to go back. Like Sam Gamgee at the end of The Lord of the Rings, it creates a deep sense of duality, where we find ourselves “torn in two,” yearning for Rivendell but at home in the Shire. It’s a necessary sort of longing that reminds us of our true identity.

So until we bid farewell to our home and sail out of the Gray Havens, we need this type of horizon-expanding art, for what we will make of our time here, and who we will become as a result.