Two years ago, I sat near John Hendrix around a campfire and he told us about the book he was working on. He said it was a biography of Dietrich Bonhoeffer that would tell the story of the plot within the German ranks to kill Hitler during World War II. Oh, and he was drawing it—not a graphic novel, but not a straight biography either. Something new. Something in between the two.

I’ve been waiting to read it since.

I first saw John’s work from down the row at a conference. He had his sketchbook open across his lap and he was taking notes for the whole weekend across a single spread in images and words that eventually all worked together into a coherent whole.

Because that’s how John’s brain works.

I’m not a big graphic novel fan. I think they’re cool. And I know people who love them. I’ve graded master’s thesis projects for educators who have laid out the ways they can be used in education for visual learners and that makes them all the cooler to me. But I’m highly verbal/auditory on my learning styles and I don’t “read” images well.

The Faithful Spy might be my breakthrough into the world. It is neither graphic novel nor a traditional book. It is both. It is not a comic book nor a narrative non-fiction book—it is something greater than either.

Hendrix’s book can be “read” in varying ways—and to get the fullest experience of it, you should use them all. There’s a spread early on which is a great example of this that I’ve shown friends as I tell them about this book. There are five bulky paragraphs of text across the spread. They give an overview of the history of Germany from before World War I to after the Armistice. But then, woven in among the paragraphs and images on the page, are highlighted words—“Stability, War, Horror, Defeat” and so on—that read together give the same overview in abstract language. Finally, the images on the page trace a river across the page from the Prussian Imperial Eagle, to tanks and trenches, to graves, to a broken scepter and a diluted delta. Any of these three allow the reader to know the flow of the story, the three together provide layers and nuance that none could carry alone. 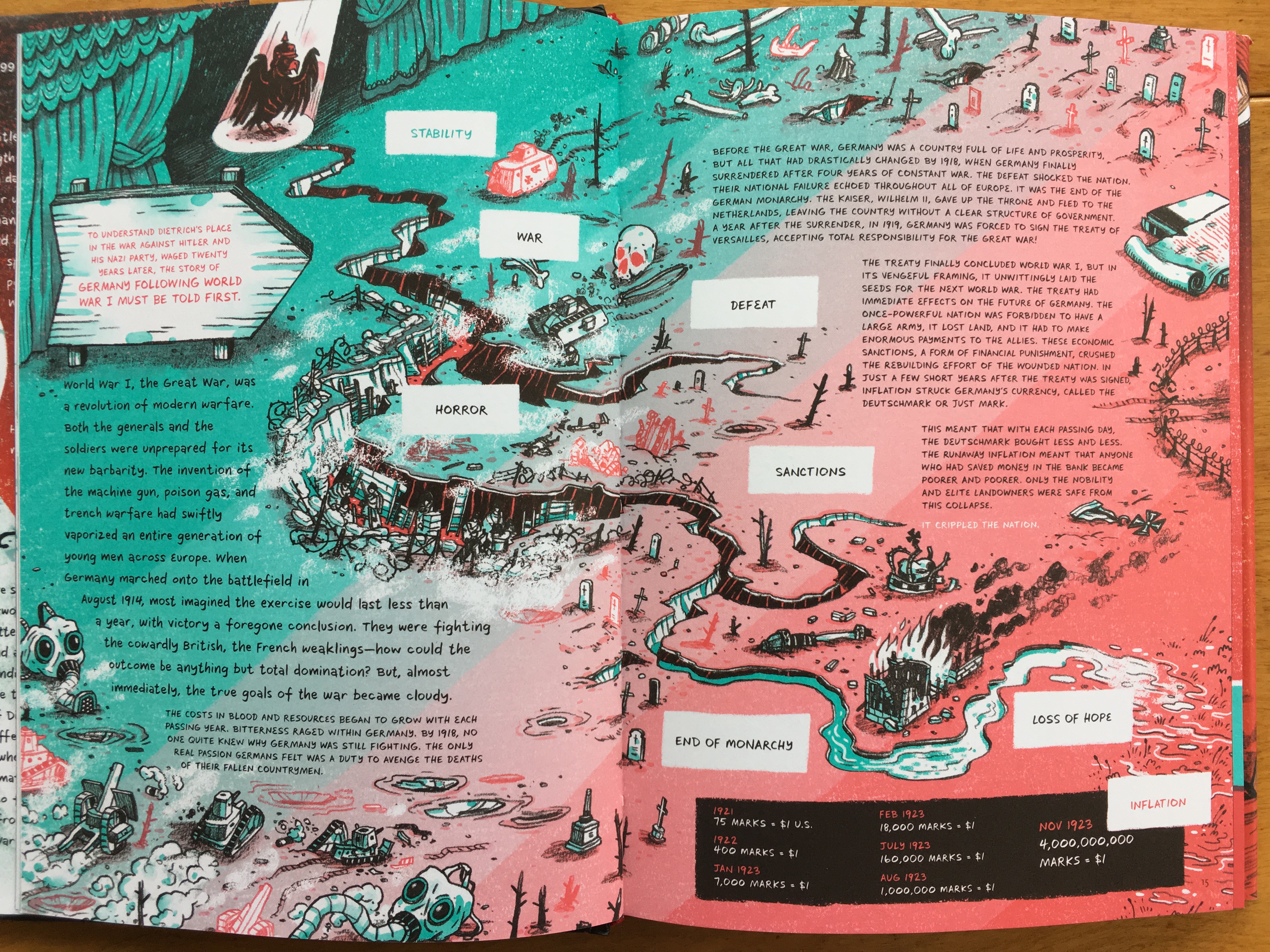 Even aside from its style, The Faithful Spy is a great book. More than once I found myself challenged in my thinking on the issues and culture of my own day and context by the questions Bonhoeffer raised as he wrestled with the ethics of being a Christian German in the 1930s. In the introduction, Hendrix reminds us of a story that often goes untold, that of the German resistance during Hitler’s era. While he doesn’t excuse the horrors that were inflicted during the war, Hendrix points out,

“Desperate for leadership, the German people were led like rats to the edge of a cliff by a diabolical Pied Piper. But not all fell for the seduction. Dietrich was but one man among many hundreds of patriotic Germans… who saw the Nazis for what they truly were and fought back.”

I wonder if I would have had the resolution Dietrich had to stand firm as the world around him crumbled into madness. Have the glimpses I’ve seen of the global Church shaped me enough to stand against the idea that different is wrong? Can the pictures of the Kingdom I’ve seen in this broken world remind me of what is true: that we are all made in God’s image? Do I too often excuse the wrong I see being done at all levels of leadership as simply “an annoying fad” and “dismiss the potential of…lasting appeal”? These are among the questions that The Faithful Spy raised for me.

The Faithful Spy is even better than I’ve wanted it to be for the past two years. It’s pretty deep. For a comic book. (Please don’t tell John I called it that.)

The Faithful Spy was published in September 2018 by Amulet Books, an imprint of ABRAMS. Get it here: The Faithful Spy: Dietrich Bonhoeffer and the Plot to Kill Hitler