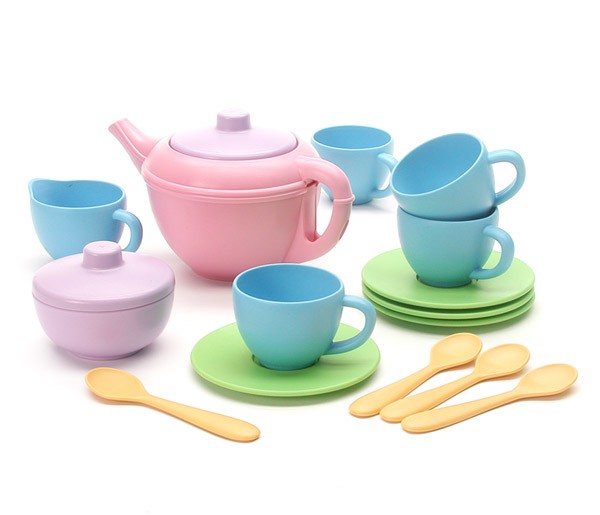 Children delight in the unseen. Since becoming a mother, I have consumed dozens of invisible cupcakes and sipped countless seemingly empty cups of tea, and it doesn’t trouble my daughter a bit when I, interrupted in the midst of some terribly grown­up task, receive her baked goods with a blank look and say, “What cupcake?”

She simply says, “This one, Mommy, right here,” and presses the invisible sweet into my hand.

I love to watch our daughters play (especially when they don’t know I’m watching). The girls make pies out of whole pumpkins in the backyard and build imaginary structures with nothing but an open craft book for inspiration; they are frequently accompanied by anywhere from one to one hundred additional siblings, often with names pulled from favorite books and personalities markedly different from their own. (These are typically brothers, and typically naughty. The current favorite, Teddy, seems to be forever somersaulting into things.) For a time, they took care of an imaginary cow named Charlotte.

Our world works hard to shut this kind of play out of the minds of children. Apps do the imagination’s rightful work and supply sound effects, music, and motion to storybooks; television and movies provide such complete scenes that there is no need at all for children to visualize the story themselves; video games allow only a pre­scripted sort of play in which children interact with but do not invent the game.

Many families simply don’t make time to play. (And play takes time. A lot of it. You can’t schedule a really great game.) Some parents, who are themselves wary of what they cannot see, discourage play that steps so far out of the bounds of the physical world.

But what my daughter is doing when she comes downstairs in her school uniform and tells me that she’s wearing a dark red dress with a full skirt and pearls is exercising the muscles required for faith:

Now faith is the assurance of things hoped for, the conviction of things not seen” (Hebrews 11:1).

She will need that ability later, for belief in God­­ – that he is there at all — requires a willingness to trust that there is more to the world than the things that can be seen, felt, and proven (1 Peter 1:8­9), so it seems that God gives children a head start by allowing them to see the world in layers, invisible over the visible.

My daughter never confuses the two: she knows (and feels it painfully, I’m sure) that the red gown is only a navy polo dress, but she trusts for a time in what she cannot see. And as a result, her day begins with delight.

That trust doesn’t come as easily to adults. As our daughters grow older, it won’t come as easily to them, either—that is the natural progression of things. But for now, we have a handful of years when they see so clearly the things that aren’t right in front of them, so I do what I can to strengthen that sight, for Jesus said, “Let the little children come to me and do not hinder them, for to such belongs the kingdom of heaven” (Matt. 19:14).

We grown­ups can hinder our children in many ways—by withholding the good news of the Gospel from them, by failing to teach them about God’s word, by setting a poor example of what it looks like to love and serve God — so many, in fact, that I’m beginning to wonder if the act of simply stepping aside and allowing our children to know God for themselves isn’t one of the greater challenges of being a parent. I often find myself explaining away mysteries that are perhaps meant to be wondered at or wrestled with, rather than fully understood, and so — quite by accident — I hinder them. They want to go to Jesus, but find that I am in their way.

And so when I am invited to dine in invisible houses, I try to leave my to­-do list behind and go, bringing my best manners with me — to take the cupcakes when offered, to tell stories when requested, and to stay out of the room when a really good game is underway. I feed their imaginations with rich books — full of characters that make admirable imaginary brothers and sisters — and I try to give them the time they need to wander the back pasture (that is, the back yard), milking invisible cows, picnicking, and opening pie shops.

But as a grown­up my skills with the unseen are a little rusty, and rather than creating objects myself, I find that I have to trust my daughter that the handful of air she carries in her cupped hands is actually a cupcake. A strawberry one, she assures me, with lots of frosting.

I poke my finger into the air about where the frosting would be and pretend to taste it. Her face lights up, and I, for a moment, smell something sweet and not unlike strawberry.

Blessed are those who have not seen and yet have believed” (John 20:29).