Madeleine L’Engle, the author of Wrinkle in Time, once said stories “Can be a star, a living fire to lighten the darkness, leading out into the expanding universe.” They have been for me. Especially when my grandfather was diagnosed with cancer.

Charles Dalton was one of my heroes and one of my best friends. He was a physician whose medical practice in central Phoenix treated mostly underprivileged clients. He was known to treat people for free or to trade a doctor’s visit for a bag of chicken tamales or an oil change.

He loved his family. He would skip lunches all year and save that money to take us on vacation. We would spend a week in San Diego on the beach and a week in Disneyland. His favorite past time consisted of sitting on the bench outside the Matterhorn bobsled ride, and people watching. He would nod and laugh at little children wobbling by, hand in hand with their parents.

He was a big kid at heart. He laughed loudly. He drove wildly to hear his grandkids scream. He listened attentively, figuring out how and when he could help us.

Most of all, he loved stories. He would read the morning comics from the paper every day. He would consume big, thick novels at night. He would tell us beautiful stories, always attempting to convince us that he was The Shadow from the radio drama programs.

When I was eleven, we learned that he had colon cancer. He told us on vacation, on a night in San Diego, most likely after telling all of us he had seen Bigfoot while exploring the Pacific Northwest. I didn’t have any idea at the time what that meant—I was lost in his story. I had seen him heal so many people over the years I assumed he would be fine.

He never got better. He withered away in front of us. I spent the better part of one summer in the hospital room with him, reading about Tom Sawyer and Huckleberry Finn. He introduced me to the wonders of Mark Twain, and those books helped me through his awful surgeries and recoveries and hospital stays. He died a few months after I turned thirteen, and his death rocked my world. I cried and wondered how this happened?

His funeral was moving. Hundreds packed the chapel. Someone told me that people stood outside the building to make sure to pay their respects. Everyone who spoke gave a different look at the man, a different story of his kindness and love.

Life changed for me. Baseball and toys and TV lost their joy. The color drained out. I was still a kid, I played with my friends, but I lost the joy of living.

What got me through all of this was the stories I heard or read.

When my grandfather was sick, and I was sad, he had regaled me with his sighting of Bigfoot, or the time he ate a truck full of ice cream so it wouldn’t melt—it didn’t matter, they all sent me laughing and forgetting momentarily the pain of the moment.

As I sat on the hospital floor, monitors beeping all around me, nurses and doctors checking on him every thirty minutes, Mark Twain’s stories had pulled me in and gave me a needed escape.

Now at my darkest hour, my oldest cousin, whom I deeply admired, asked if I wanted to see a movie. I jumped at the chance—she was the definition of cool, and I got to ride in her red Iroc sports car.

We arrived at the theater, and she paid for us to see Dead Poets Society. For the next two hours and change, I was spellbound. The story of a larger-than-life teacher who believed people can be extraordinary ignited the healing of my heart.

I left the story different from how I came into it. My cousin’s willingness to share this story with me has been a living fire in my life ever since. The tale connected her and I. I will never forget it or her kindness. I am here today—I write stories today—because she gave me the gift of story.

What will the stories we share do for someone else? Someone around us needs some light, they need a star in their black night. We can give it to them through the power of stories. As parents, the stories from our own lives can provide a lifeline for our children, letting them know things will be okay. The stories we create for them can show them pain will come but they can overcome it. And the stories we pull from culture can be a voice of hope and inspiration in their times of need as well. 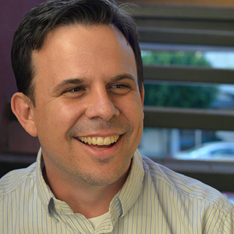 Chris Dalton
Christopher F. Dalton is a storyteller by trade. His new novel, Nicholas and the Keeper of Names, is a thrilling fantasy-adventure for ages ten and up, and his modern-day fairytale, The Lantern Heart, is an illustrated tale set in the forests of Alaska. Both books are on sale via Amazon. He has written four feature films and a gaggle of short stories, as well as having ghostwritten twelve books.

Christopher and his wife, Carissa, launched Huck&Dorothy, a story company, out of a love for stories and a mission to spread joy and hope through moving stories. They live in Los Angeles with their three sons and two rabbits.