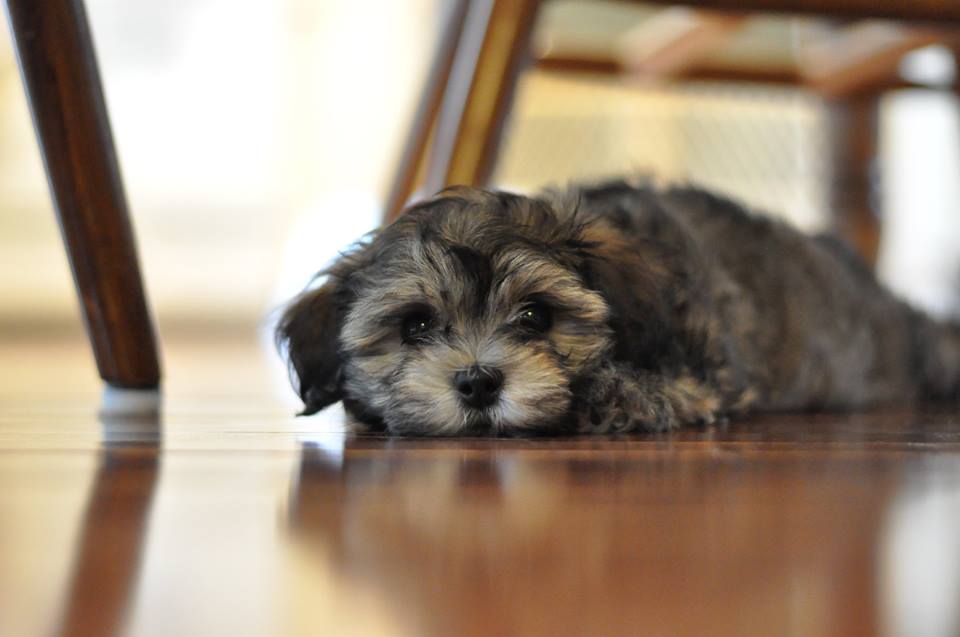 The cool moss under my bare feet awakens a dormant sensation. I stand in the back yard, pink leash in hand, watching a nine-week-old puppy who is almost frantic in her exploration. While my feet remind me of a texture and a temperature I knew long ago, from boyhood summers that saved shoes and socks for Sundays, the puppy’s paws and nose write new stories about the world.

We bought our little Havanese just two weeks ago, and we named her Lucy. I grew up with dogs – Skipper, then Patches, and then my dog, Sam. He was my playmate and my confidant, and we spent our formative years together. My wife Amy also grew up with dogs, but they were big Weimeraners who jumped and knocked her over and made her afraid.

By the time we were married and moved into our house in the suburbs on a one-third-acre lot, she was pretty adamant that we not get a dog, and I was resigned to the fact that our yard wouldn’t really work for an outside dog. We had a rabbit for a while, which was interesting, and four failed attempts at hamster ownership, but all the time I wanted a dog, and some of the time I dropped not-so-subtle hints. One of our three daughters – Hannah – was on my side, and we even joked that if she scored a goal for her high school soccer team (she was a defender) we would reward her with a puppy. Alas, she hit the post in her final game last Spring and the veracity of the prize was never tested.

Hannah graduated, and for some reason Amy softened. We began a search. Even though we had talked tentatively about an older, already housebroken rescue dog, we fairly suddenly found ourselves melting in the gaze of Lucy’s big brown eyes.

John Ortberg tells the story of his parents, pondering life as empty-nesters settled into an entrenched routine. Wife turned to husband and asked, “Is this all we’re going to do for the rest of our lives?” and he quite honestly replied, “I guess”.

Well, I can now confidently declare to anyone who wants to shake things up a bit: get a puppy.

Whoever said raising a young puppy is like raising a newborn was correct. In our short sojourn we’ve had sleepless nights, stained carpets, and traumatic car rides. We’ve shouted “NO!” and been ignored by the clueless mongrel whose favorite display of affection is biting you on the big toe. We’ve pitied the whimpering ball of fur after her shots and pleaded with her to sleep after those shots upset her tummy.

Small, helpless creatures in our care tend to reduce us to a base state in which we adopt a ridiculous baby voice to talk more about pee and poop in one day than we have in the past decade. It was that base state that led me outside, barefoot on the moss, watching Lucy explore. I forgot, for a moment, my highest of priorities: that she pee outside instead of inside.

I’ve spent a lot of outside time with Lucy the past two weeks, and those dormant sensations wake up every time. The glint of light from an airplane; the scream of histamine from the back of my leg, just behind the knee; the violent rumble of a locomotive that startles both a man and his dog – these are elements of the world I had missed before I had cause to go outside so often. Something so fundamental, so simple – the need to housebreak a puppy – causes me to drop every “important” thing and rush to the door, grabbing a pink leash on the way, and I am rewarded. Just yesterday I marveled at the individual beams of sunlight rising behind a mighty white cloud, the way schoolchildren draw the sun on construction paper. I spoke aloud, “Glorious!”, and just then (I have too much respect for Rich Mullins to make this up) a single hawk burst into flight.

In my most frustrating moments of puppy-raising, I shudder to think that we’re doing this voluntarily; moreover, we paid for this! But when she falls asleep on my lap, or when we celebrate the moment she finally climbs atop the step stool she’s been reaching for, or when I find myself awestruck by a watercolor sunset I’d have otherwise missed, the frustration is redeemed.

I believe it is godly to care for others. I also believe the value of that care rests in equal measure to just how needy those others are. Sure, this is just a dog, but in feeding and bathing and sitting up with her I am learning anew, even now in my mid-forties, what it means to care. And when I effortlessly lift that little puppy into my arms, angry about the puddle beneath her feet, and when those eyes melt me yet again, I’m reminded of a God who effortlessly lifts me up when I’ve made a mess of things. He looks beyond the parts of me that are so frustrating, and perhaps He wonders why I never seem to learn, and then He looks into my eyes and still calls me loved.

There is a world that is far richer than my routine, and a God who wants to watch me explore it, who wants to teach me what it means to love.

Mark Geil
Mark is a professor of biomechanics and occasional writer, music critic, photographer, and movie extra. He has too many hobbies.