I used to believe that fear was the mark of weakness. I grew up with anxiety that really did weaken me, because of the pain that came with it: the turning stomach, racing thoughts, and hyper-vigilance that made me feel like I’d downed fifteen cups of coffee. Rarely did I have the choice whether to listen to my gut. It demanded that I obey, that I flee the scary thing, owing to the all-too-familiar fight-or-flight response. If I ran from what scared me, I returned to a sense of calm and control over myself. If I didn’t, I remained powerless.

Fear clouds the lens of action, but over the years I’ve learned to stand—still, though afraid—in the fog. This is the story of one of those times.

Not Your Typical Church Service

It was a Sunday, in the middle of the liturgy. My husband had just left to fetch our infant from the nursery, leaving only two in our pew: Paul—a man in his 50s—and me. We’re a small congregation in a 19th century Gothic sanctuary, so it was normal for three people to expand and fill an entire row.

When we stood to pass the peace I shook Paul’s hand. I drew closer and noticed something. His eye. Did it turn in a little?vWeird that I hadn’t seen that before.

I knew Paul had recently had a seizure after church. I remember friends helping him, their med school hands tending to him while he lay prone in the vestibule outside the Parish Hall. So when Paul handed me the offering plate and I noticed he was quivering, I was concerned.

With that incident mind, I thought it wise to inch closer and ask if he was alright. His “Yes” was a yes with delight, an, “Of course, but thank you for asking!” uttered in one languid syllable. I reasoned that his quivering must be a tremor I’d never noticed. But as the plate went around, I kept watching.

A thought like vapor entered my conscience. It was so noxious that in an instant, and without words, it told me I could leave. I should leave. The bathroom, maybe? Because the thought of staying here in the sanctuary—in this pew—turned my stomach. My gut told me something was about to happen to Paul. I didn’t know what, but if I left I wouldn’t have to be a part of it. Besides, what could I do to help him, afraid and powerless as I was?

I can’t explain why I stayed. I have replayed this part of the evening searching for more detail, but there is none. I know that I just kept eyeing Paul expectantly, like a parent watches a child walking on a wall, ready for the fall.

We stood to start Communion, and that’s when he did: Paul fell. The sudden change in altitude must have activated something in Paul’s brain and he seized again. He blacked out. He went stiff as a board, moaned, then fell like a plank onto the pew in front of us. Unable to control his body, and still falling, the only place to go now was the floor. Before I reached for him I was already spitting “Help me! Help me! Help me!” People in nearby rows offered hands and arms, but I was the only one positioned to catch Paul’s whole body and keep his head from hitting marble. I lowered him to my feet where he lay convulsing, but safe.

Soon others appeared in our row to talk to him cheerfully and wipe his mouth. They searched his backpack, called 911, and the seizure ended. Paul went to the hospital shaken but ok.

I lay awake that night feeling honored and awestruck. My arms were the ones that caught Paul when he fell. Mine! I was there to interrupt his trajectory to the floor. If I had left him alone in the pew, he’d most surely have suffered a concussion, or worse. God used me to do something important, and he did it through my fear.

I don’t mean that my fear was the instrument—the how—of God’s action. He didn’t give me the sensation of fear to help me decide whether to stay or leave. I was too anxious to have taken any direction from God then, anyway.

I mean that God used me in the thick of my fear. Like sunlight penetrates fog, purpose—my usefulness in that instant—persisted on, around, and within my fear. Fear and purpose occurred at the same time; while I was afraid, I was useful.

Sometimes I still feel powerless in my anxiety. But I know that God can work in me, even then. Exodus 14:14 says “The Lord will fight for you, and you have only to be silent.” (ESV). Some other Bible translations, I believe, make this point even more clearly: “…you have only to be still.”

Maybe sometimes fear is present to tell us to flee. But sometimes all we need to do is stay right where we are, waiting for the fog to clear. 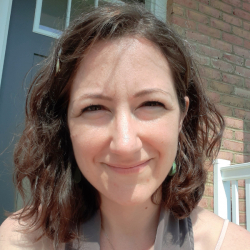 Jessica Whipple
Jessica Whipple writes for adults and children. She is a DIY contributor to Wildflowers: A Creative Magazine for Girls, and has contributed to children's magazines like Highlights. She is a volunteer reader for the literary magazine Ember, and is pursuing publication of her picture book manuscripts.

Jessica and her family of four recently moved from Pittsburgh to Lancaster, PA. You can contact her at www.AuthorJessicaWhipple.com.