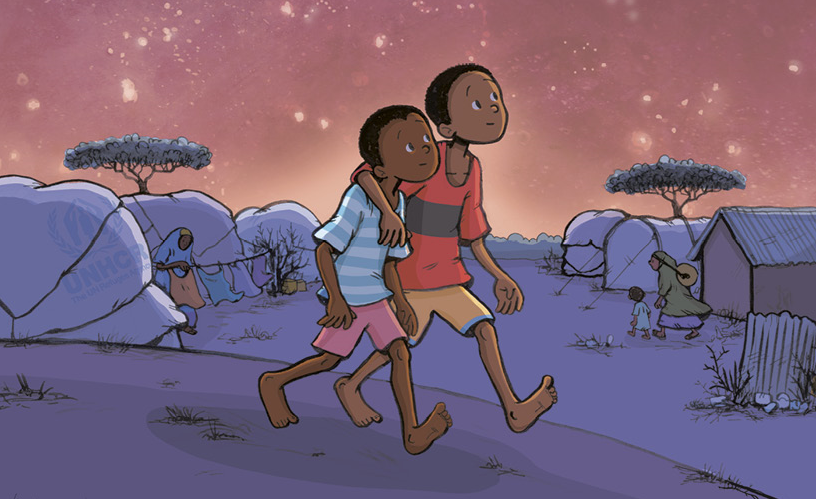 For me, the first years are lost.

Golly, that’s a great opening sentence, isn’t it? After reading it on the first page of the new middle-grade graphic novel, When Stars are Scattered, I immediately had questions. The first years of what? Why were they lost? The only solution: keep reading. The answers that unfold on the subsequent pages are both difficult and beautiful. Award-winning novelist Victoria Jamieson collaborated on this memoir with Omar Mohamed, who spent his childhood with his brother Hassan in the Dadaab refugee camp in Kenya. During the civil war in Somalia in 1991, Omar and Hassan’s father was killed, and they became separated from their mother. They fled with neighbors to Kenya, where they thought they would stay for just a short few months in the Dadaab camp. But as the book opens, they have been waiting there for seven years.

Waiting is an important theme in this story. It seems as though Omar and Hassan spend every day in the camp waiting for their mother, or for news of her. (An author’s note at the conclusion of the book reveals that the brothers were finally reunited with their mom in 2014, after a separation of twenty-three years.) As the story progresses, Omar also spends an increasing amount of time waiting to get out. He wants to leave Dadaab more than anything, and it is a long process. The reader waits with Omar to find out of he passed his classes to get to go to middle school. We wait, and wait, and wait for the UN resettlement interview process. Four years pass between the time of Omar and Hassan’s first interview and the news that they will be resettled in America.  This urgency and restlessness drive the story forward, even as the plot weaves in the other challenges of refugee life. I particularly liked the inclusion of Nimo and Maryam, two young women who Jamieson invented for the story based on Omar’s memories of life in the camp. The experience of a young girl in a refugee camp is very different from Omar’s and Hassan’s, and I think the inclusion of makes the book stronger.

I’ve read several refugee stories before, but this one really struck me because of the impact the visual element can have. Three cheers for the graphic novel format to tell these types of stories! The visual landscape of a refugee camp is very different than the typical neighborhood of most readers who will encounter this book. Descriptive language gets you part of the way there, but seeing the illustrations—the overhead view of the wilderness of tents, the crowds of people waiting in line for food—really impacted me as I read this. Jamieson strikes the perfect notes for a middle-grade audience in choosing what and who to illustrate in each frame. There’s so much more I could say about the things I loved in this story; the respect with which Omar’s Muslim faith is portrayed, the contrast drawn between his drive to get out and the listlessness of those refugees who have given up, and the sacrificial love of Fatuma, the boys’ foster mom in the camp. Even so many years after this book takes place, our world still faces a massive refugee crisis. This is a great one to read with your kids, if you’re looking for a touchpoint to discuss these issues.