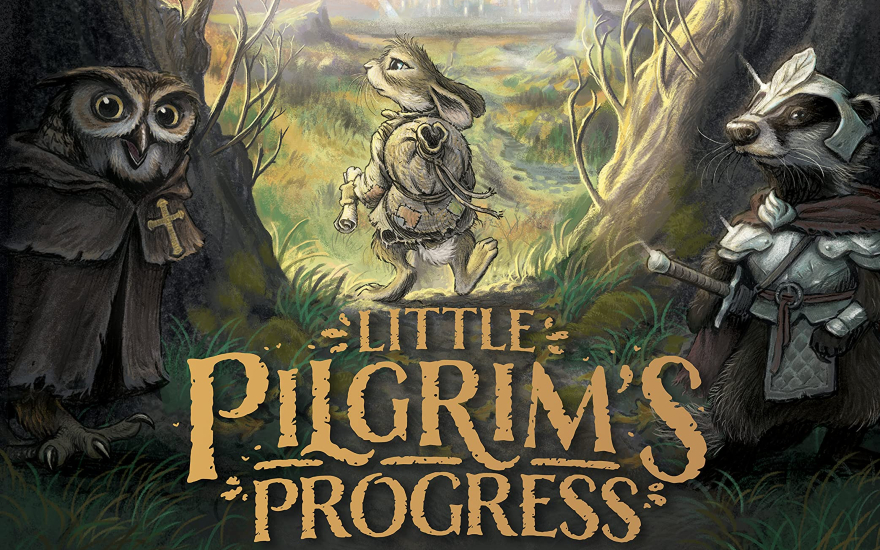 Today I am extraordinary pleased to announce that Moody Press has released a book destined to capture the imaginations and liberate the hearts of children in a way that will surpass nearly all the other books printed in this decade. That’s a bold claim, I know. And it’s not the sort of thing I would ordinarily say, but I’m talking about New York Times best-selling illustrator Joe Sutphin’s re-envisioned edition of Helen L. Taylor’s Little Pilgrim’s Progress.

When John Bunyan published Pilgrim’s Progress in 1628, it set fire to the imaginations of his readers. It was among the earliest approaches to the form of the English novel, and I’m told it was one of the first books to make use of written dialog as we know it. Beyond that, the story’s use of allegory was extremely powerful. Bunyan’s straightforward, declarative narration and anthropomorphism of abstract human struggles with despair, envy, despondency (and many more), made enjoyable reading for adults and children alike, while his claims and implications about the serious stuff of Christian life (see the above list) gave more mature readers something to consider and discuss. Pilgrim’s Progress was a great work unprecedented in the English language, and it has never been out of print.

Nearly seventy-five years ago, Helen L. Taylor began to think that it would be so much better for the children who read Pilgrim’s Progress if they could benefit from Bunyan’s Christian encouragement as well as enjoying the adventure. So, she began to write an adaptation for children, which was published first as a serial and then later in book form. Along the way, she made what I consider to be objective improvements.

Since Taylor was writing for children, Bunyan’s great work had to be shortened. And as a writer and editor myself, it is my conviction that few indeed are the books that would not be improved by a serious pruning. The thing about cutting a book down is that you are forced to make choices. Where is the beating heart, and what is shaggy fur?

Taylor shaved off some of Bunyan’s more strident moralising, and his anti-Catholicism. She trimmed out some archaic language, and some of the lengthier rebukes Bunyan’s poor Christian suffered after his failures. Then she took the genius of Bunyan’s straightforward narration a step further, and she told the tale in sentences simple and direct enough for children reading contemporary English.

The story we get in Little Pilgrim’s Progress is vibrant with first the rumors, and then the evidence of a good King who loves children, rescues them from both a dangerous world and their own folly, invites them into a kingdom for the pure of heart, and meets them with endless forgiveness. This welcoming generosity is demonstrated not just by the content of the story, but by the welcoming and generous style of Helen Taylor’s writing. She did not “dumb down” Pilgrim’s Progress. If anything, she elevated it by her obvious love for the children who were her readers.

In Sutphin’s Little Pilgrim’s Progress, all of the characters are anthropomorphic animals. The embodied evils—such as Self, Deceit, Despair, and Unbelief—are wolves, foxes, giant hares, weasels, and so on. The servants of the King are rabbits, squirrels, groundhogs, owls, and others.

This clearly makes the story more welcoming to children!

While I can’t say for sure why all kids love stories about animals who talk and act like people, there is something wonderfully inclusive about them. Because little Christian is a young rabbit, each reader can relate (ironically) to his universal humanity, without regard to the color of her own skin, or any other part of her own appearance. The villains also, once stripped of their similarity to real-life strangers, bullies, and unkind grown-ups, are frightening for the right reason—the role they play in the story. This allows Sutphin’s Little Pilgrim’s Progress to include genuine danger and believable fear; to tell the truth about the difficulties of the Christian life without becoming too realistic for the minds and hearts of young children.

The welcoming generosity of this story is on display in the sheer number of illustrations, every one a truly beautiful piece of work. I have often heard books referred to as, “lavishly illustrated,” but I don’t think I’ve ever seen a book of this length (310 pages) so overflowing with artwork. Every second page-spread includes an illustration in Sutphin’s evocative, almost tactile, pen and ink style. The spreads in between all have chapter breaks, with an alphabet of illuminated drop-caps that Sutphin developed just for this book.

As if that weren’t enough, the end-papers are a cornucopia of beauty. Before the story begins, there are twelve pages of wordless, full-page illustrations that tell the story of little Christian’s life prior to chapter one. After the story ends, there are eight pages with illustrations from the Celestial City, and the life of Evangelist.

I find Sutphin’s re-envisioned Little Pilgrim’s Progress captivating and stirring. The only text on the (gorgeously illustrated) back cover invites, “Join little Christian and Christina with the cry, ‘I am going to the King!’” and I truly believe that this book will inspire your children, as it does me, to answer, “Yes!”