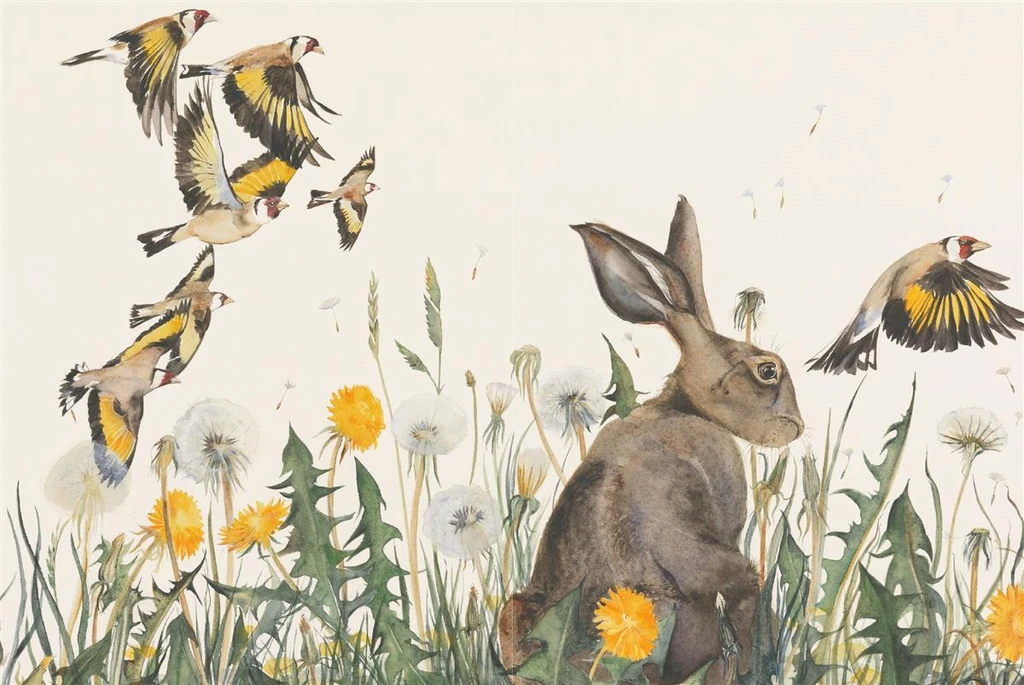 “Once upon a time, words began to vanish from the language of children.” Oooo—doesn’t that sentence send a little shiver down your spine? Read it a little slower, maybe in a bit of a British accent. It feels almost like the beginning of a mystery/fantasy epic, in which a brave band of beauty-seekers goes out to solve the mystery and reclaim the lost words for children everywhere.

Well, maybe not a mystery/fantasy epic—how about a book of nature poems, instead? It was this exact vanishing of words—the absence from a recent edition of the Oxford Junior Dictionary of some common words relating to the natural world—that inspired Robert Macfarlane and Jackie Morris to create The Lost Words, a beautiful, lavishly illustrated book of poems re-introducing words like “bluebell” and “kingfisher” and “willow” to children. I’d been eagerly anticipating this one on my library holds list, and when it landed on my desk earlier this week, I was almost in a bit of shock. This book is large. I don’t mean long (it’s only 128 pages), but rather impressive in dimension, measuring almost 15 inches tall. The heavy weight of the paper, the glossy full-color illustrations, and the size all add up to a sort of hushed “wow” feeling when you hold it in your lap, which I suspect is just what the author and illustrator would have hoped. The prologue refers to the books as a “spell book,” and that’s exactly the sort of special, magical air that it carries.

Author Robert Macfarlane has chosen twenty words, each one a plant or animal, and they are presented in alphabetical order, from “acorn” to “wren.” Each word is introduced by a sort of visual letter puzzle, with a group of letters scattered across a page spread intertwined with a simple illustration, the letters of the word standing out in a different color than the rest. The comes a poem about the word, cleverly written as an acrostic, but in a variety of styles. Some of the poems are very short, with just a few words for each line of the acrostic, and others spread out for a full sentence before continuing to the next letter. They range from silly (“Newt, oh newt, you are too cute!”) to serious (“little astronaut, where have you gone, and how is your song still torrenting on?”), each one fitting the majesty or playfulness of its subject. I especially love the ones where Macfarlane plays with alliteration or internal rhyme, giving some of the poems a very Hopkins-y vibe (“fern’s first form is furled, each frond fast as a fiddle-head”). On the page facing each poem is a beautiful painting by illustrator Jackie Morris, depicting the poem’s subject. And as an extra visual treat after that, another full-page spread, this time completely filled with color and movement, showing the plant or creature in a wider scene. I tried to count the number of starlings in one spread, and had to stop at 168—and that’s not even counting the shadowy ones making up the shape of a murmuration in the background. Quite a visual feast! My only quibble is with the stylized font choice for the poem titles, which makes some of the letters difficult to decipher, especially for younger readers.

The “spell book” descriptor works for both the content of the book as well as its outward appearance—I finished turning the pages and felt myself enchanted, just itching to go for a ramble through the woods or across a field and fill my eyes with more beauty. I appreciate Macfarlane’s and Morris’s ambition to make sure these words are not lost, that even children growing up in urban environments or those who don’t have access to outdoor spaces can recognize and name a heron or a dandelion or an otter. Since its original publication in 2017, this book has spilled over its pages, spawning an album of songs, a card game, sold-out tote bags and jigsaw puzzles, and in 2020, a smaller-sized second book of poems and paintings called The Lost Spells. I hope to get my hands on that one, too, and spend some more time reveling in this wonderful collaboration, waking up my imagination to God’s goodness in creation.