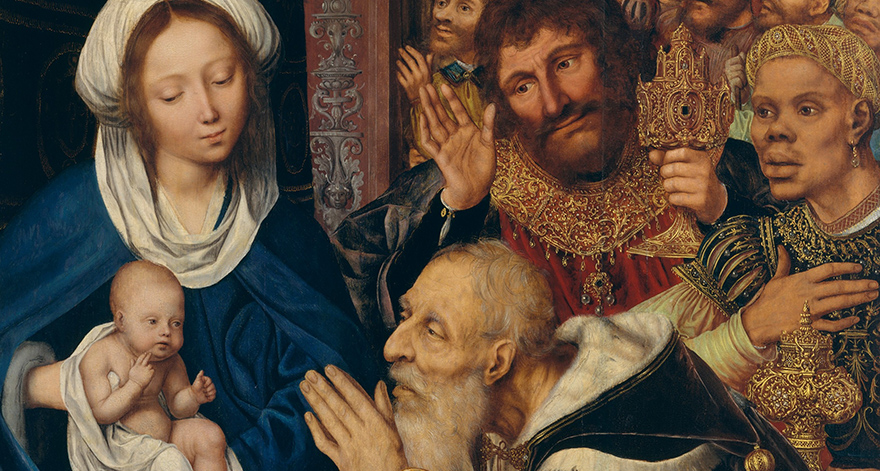 Last Christmastide I, once again, grossly overestimated my powers. To begin with, in an attempt to be hospitable we had invited international guests into our home who spent most of Advent and all of Christmas with us. On Christmas Eve, my roast beef, which was intended to both impress and embody the spirit of feasting as we lit the final Advent candle, became a charred mess in the oven. We felt like the Bumpus’ dogs had run off with Christmas dinner and I wanted to sit down in the middle of the kitchen floor and cry. Instead I chose to laugh. Actually, I had to laugh in order to save appearances. This is the usefulness of having people in your house other than your immediate family- you are forced to hold yourself together and act mature.

This Christmas season, I tried so hard to make Advent meaningful and I worked at preparing my home and heart only to find both terribly cluttered once December had passed. I commiserate with Auden who lamented,

Once again,
As in previous years we have seen the actual Vision and failed
To do more than entertain it as an agreeable
Possibility….

And now I find myself preparing for a New Year, longing for the transcendence that eluded me last year and this year on Christmas Day. I need a manifested presence in my life, a revealing and a vision of all that is True.

I am looking for Epiphany.

To most of our modernized churches, Epiphany is a privilege that belongs only to the ancients, the Europeans or the Catholics. Yet both Epiphany the day and the idea belong to the church as a whole and without it we are left empty and lacking. When I was in college I spent a January term studying in Seville, Spain. My time there overlapped with January 6, the day of Epiphany. My host family presented me with a small but precious gift- a brown plaid scarf dotted with little elephants like the European women wore, packaged in a little box with a tag that read, from Balthasar.

They explained to me that my gift came from Balthasar, and name they had to sign traditionally to one of the Wiseman. As a young Baptist girl I was not even aware that Epiphany was part of the church calendar. Still, I treasured my scarf and was mesmerized by the idea that it had been symbolically gifted to me in lieu of the gold, frankincense or myrrh that had been presented to Christ so many years earlier. This was my first awakening to the idea of Epiphany and its meaning on our Church timeline.

This year I don’t want epiphany to be a mere representation but a reality.

Though the date itself, January 6, the twelfth and final day of Christmas, has just been marked through on our calendars, Epiphany itself is still something to be grasped. It’s not too late to grab on to the trailing tail of the epiphany kite and be lifted up above the cares and concerns of this world. Because of the mystery revealed in Christ, the day of Epiphany is here to stay. The magical and mystical appearing has happened and it wasn’t in the person of St. Nicholas. It is the revealing or appearing of Christ not only for the Jews but also for the Gentiles. What Paul considered a mystery had actually been revealed centuries earlier to Isaiah as the kings of Sheba and Seba who came and brought frankincense and myrrh were prophesied about meaning that this gift of Messiah would be for the Gentiles and all nations. Today the gospel is available to all nations. In fact the great commission compels us to declare that it is so and it is the revelation of Epiphany that should fill out our ordinary days and give them meaning purpose and mission.

I like the word mission because it makes me feel that each day I am waking up to actually do something that holds meaning and purpose. I want to set goals and grow and change yet there are many tunings I want to remain the same.

Looking ahead to the new year I desire both permanence and progression and struggle with how to reconcile the two. I am learning to navigate visioning and moving forward without dislodging the practices and permanence which bring significance to my life. I want to make new friends but keep the old. Russel Kirk said:

“The Permanence of a society is formed by those enduring interests and convictions that gives us stability and continuity; without that Permanence, the fountains of the great deep are broken up, society slipping into anarchy. The Progression in a society is that spirit and that body of talents which urge us on to prudent reform and improvement; without that Progression, a people stagnate. I desire both permanence and progression.”

I need both stability and reform within my own person but realize that all of the books on my reading list will not conform me to this image. It will take Christ himself. No, not the young Christ whom the wise men found and acknowledged as King of the Jews but the Christ who wears the crown and is hailed as King of the whole world. The Christ who promises all things eternal and all things made new.

So as I look to Epiphany I am looking to Christ. I am still setting goals and reading well. I am still putting systems in place for holy habits and resolving to be resolute. But I am doing so in the revelation that I am not enough and habits are not enough and Advent is not enough. I look to the mystery and let it speak what has been and what is yet to come. And that is where I will walk.

Featured image from The Adoration of the Magi, by Quentin Metsys

Jessica Deagle
Jessica is a homeschooling mother of three who, when not travelling the world ministering with her husband, can be found drinking tea, watching British drama and rearranging furniture in her Georgia home.

You can find more about her's and her husband's ministry at http://williamdeagleministries.org/.