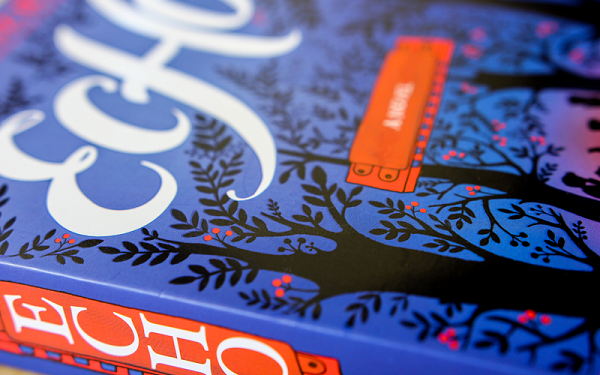 Audiobooks. In my experience, they can be hit or miss. A well-plotted and suspenseful story filled with wonderful characters can still fall flat if the audiobook narrator doesn’t capture the excitement and flavor of the book. And a great audiobook can elevate a story by adding to it; different voices, high production values, well-placed dramatic pauses, etc. I’ve enjoyed many a great audiobook, but I am about to say something that would have shocked me a few months ago: I’ve found an audiobook that I think is BETTER THAN the print book. This gem-for-your-ears is a middle-grade novel called Echo, by Pam Muñoz Ryan. It was published in 2015, and I recall seeing it on some “best audiobooks of the year” lists around that time. I put it in my “to listen to” queue and promptly forgot all about it, until this summer when I needed a new audiobook to listen to during a drive. I went in knowing nothing about it, and was thrilled to discover the reason why this makes such a great audiobook: the plot revolves around music. Of course! What could make more sense for a brilliant audiobook than one which includes such an important non-word element? It’s a perfect match.

Echo is broken into three main parts, bracketed at beginning and end by a shorter story about a boy named Otto and his discovery of a mysterious book. The layers of plotting here are wonderful; near the mid-point I started to get the sense that all the stories would be connected somehow, and Ryan wraps everything up brilliantly in the end. I especially appreciated the diversity of the three main protagonists. The reader gets to know two boys and a girl, one with two parents, one orphaned, one living with his father, each with completely different life experiences and perspectives, even though all of their stories take place within a few years of each other. The audiobook narrators—Mark Bramhall, David de Vries, Andrews MacLeod, and Rebecca Soler—each take on a different main character, which really helps to give a distinct sense of their personalities right from the start.

The narrators do a wonderful job, but what really makes Echo stand out in this medium is the music. Each of the three children is a naturally gifted musician, and displays a love for various genres; classical Brahams lullabies, American blues music, Rodgers & Hammerstein show tunes. The common thread that binds the stories of these three kids together is their uncommon skill at an unusual instrument: the harmonica. My favorite parts of the audiobook featured a character learning a new song or playing a quick comforting tune in a hard moment. The harmonica music gently faded in and at times went on for several minutes, really making the listener a part of the story, which I loved. It felt so immersive, in a way that I’m certain I would not have experienced had I just been looking at the song lyrics on the page or reading about how the character played. Here’s a description of one character, Mike, learning how to play the blues on harmonica:

“At the end, Mr. Potter seemed to goad the song into wailing…. He played two chords.

He played a note, bending it.

Mr. Potter made each phrase different from the last. Back and forth they went—first Mr. Potter and then Mike. Short notes, like words. Followed by longer phrases, like full sentences. Then, entire paragraphs of music, as if the two of them were having a conversation.”

Now, imagine that paragraph liberally sprinkled with bits of actual harmonica playing, and you’ll understand a bit of what the audiobook experience of Echo is like. I enjoyed it so much, I’ve been wracking my brain trying to think of other audiobooks that might have hidden musical secrets for me to discover! I hope they’re out there waiting for me, just like Echo.