The lone man stared at us as we meandered through the old stone village. We had been down these ancient paths at other times, but each time deserves another look at history. This grouping of homes, pulled from the earth in the form of rough-hewn rock and aged timber is known as Espinoso de Compludo. No one knows how far back the village goes, but the Romans walked these mountains. They slaved to build aqueducts, bridges, and quarries. Lives were dedicated to pull vast amounts of gold from these same mountains. After Rome had pulled back, others pushed in and these villages have had cycles of life, death, and rebirth.

We struck out walking down the stone street. With three little kids running around, we don’t move far but we don’t leave much untouched. Children are rare in mountain villages. Few families want a life where there is no public education, no after school programs, and no playmates. But that is the life offered in these out of the way places. Generations divide. The villages sleep. And when we visit, we make a sight to behold. I can only imagine what the villagers must think as this band of raucous foreigners moves down the street, touching the stone and herding the children.

But one man smiled, obviously happy to hear the small voices bouncing across his village once again. In my world, a smile, or even accidental eye contact, constitutes an invitation to a conversation. So we began to chat. He spends his weekends up here in the mountains with his wife. They have been doing so since they were married. They have another life down in the city, but that is a life of work and busyness. Not like the life here.

In the city they work. In the village they create. He led us into his workshop. Once used to hold the farm animals of a previous century, this workspace was the first floor of their home. Wood lined the walls and piles of shavings covered the floor.

“I work with wood. I make things. I finish things.”

He led us through a gallery of projects he is working on and others he has finished. In the city he works with iron and steel, forcing metal through machines so buildings can be tall and roads smooth. But in the village he creates with wood.

“I haven’t always done this. I only started four years, six months, and one day ago. That is when my son died. He left projects unfinished. I had to finish them.”

Tables, benches, bowls, and carvings, he pulled them out and let the kids look at them. They were labors of love. They were projects he could finish, and projects that could help him process. The pain from the loss of a loved one never gets shelved, it gets worked on.

We walked through his home and he let the children play with the carvings he had done. He showed us photos of his family, and the son whose memory still moves his hands to create. When I finally moved the kids out the door, Crystal snuck back in and bought a pen he had carved, saving it for my birthday. 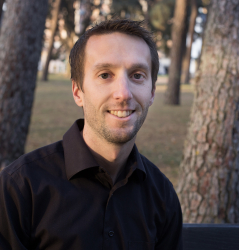 Seth Grotzke
Seth and his family live in the mountains of northwest Spain, sharing their faith, exploring the mountains, and chasing good stories.

They share what they are learning over at SCQuest.org and their adventures at sethgrotzke.com.