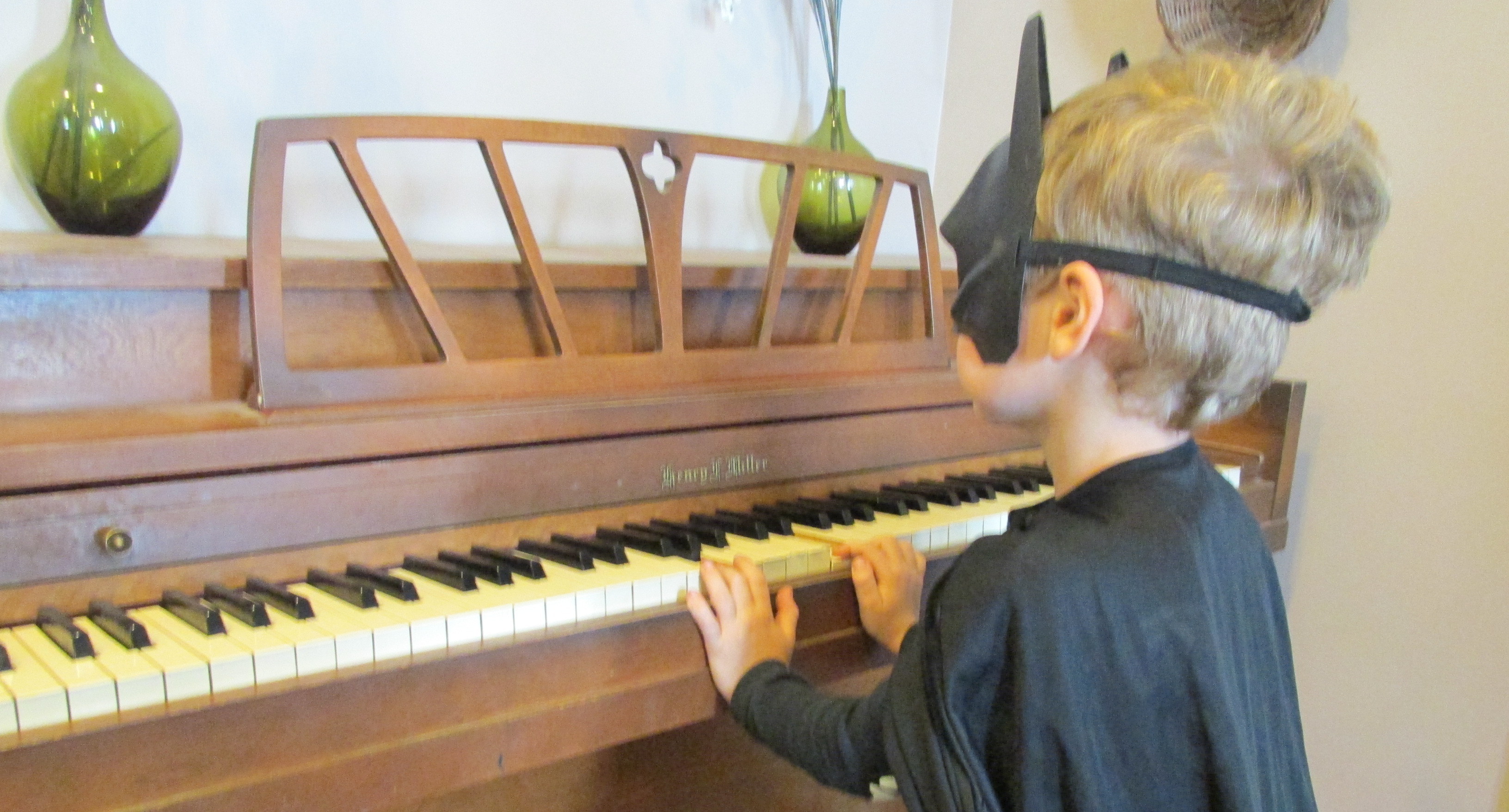 At his suggestion request, my younger son received two beloved items for his fifth birthday earlier this year. One was a strikingly authentic, midnight-black Batman costume, cape to cowl, everything a little boy needs to patrol the streets of Gotham on the lookout for evildoers. Did he like it? Let’s see – beginning with our traditional birthday breakfast at Peppermint’s restaurant, he was costumed for roughly three-quarters of his waking day, drawing some interesting looks while he tried to manage the challenging job of eating pancakes while wearing a plastic mask.

The other gift was a CD of the music of Johann Sebastian Bach. Though he hadn’t requested Bach specifically, the album was part of a line of radio theater-style programs which weave the music of classical composers into the story. Like his Batman costume, the CD went over like gangbusters. He listened to the CD in its entirety three times a day – that’s a safe estimate, mind you – for the next two weeks, gulping down the music of Bach like he had done with similar recordings featuring Beethoven, Handel, and Tchaikovsky.

Batman and Bach. Go figure. Could you have picked more contradictory interests? But that’s my son. Both of my boys, in fact. They’re walking contradictions. They love action figures, lightsabers, and … the Moonlight Sonata. There was actually a moment when the strains of a Bach cantata drifted out of the stereo speakers while my son leaped from the couch at his older brother yelling, “Come and face justice, Bane!”

So what do we do with these seemingly dichotomous elements of our children’s personalities? One school of thought we’ll call the “Choose a Tribe” school suggests specialization is the right path. Each interest in our children’s lives – Lego robotics, dance, or swimming, for example – represents a Tribe, and they should pick one relatively early and focus on it almost exclusively. Though this will come at the expense of the others, this path will ensure the chance to become Really Skilled, earn College Scholarship Money, and be Successful in Life.

However, this path doesn’t seem true to who my boys are. More importantly, it doesn’t seem to acknowledge the complexity which God has placed at their core. I pray for a different mindset: to be blessed with the ability to see these disparate elements in my children – and myself – as harmony, not dichotomy. The word “harmony” derives from a Greek verb meaning “to fit together” or “to join.” This derivation suggests that, like puzzle pieces, our interests and abilities all have a perfect fit, the product of a perfect design. And, let’s face it, harmony is what makes music shine, doesn’t it? A haunting or majestic melody is lovely. But adding those complementary notes make that melody even more sublime.

When viewed as harmony, each element of our child’s personality becomes part of a grand, purposeful design to add depth and richness to his or her personality, and to make all the parts sing louder of the Creator. Our God is complex, and so is his creation. He made the great blue heron and the platypus, the Alps and the cypress swamp. These are all harmonious, complementary products of his wild imagination which make the world equally wild and exciting.

The God who looked into swirling chaos and spoke cosmos into motion unfailingly imbues each of His children with diverse, harmonious interests. Though they may seem like dichotomy, they are really a way to display his largeness. By celebrating these interests and abilities as harmony, we celebrate Him. And, I suppose, once I’ve trained myself to see these dichotomies as harmonies within my children – and myself – I’ll be more comfortable embracing them in others, accepting them for the wild, wonderful creations they are, too.