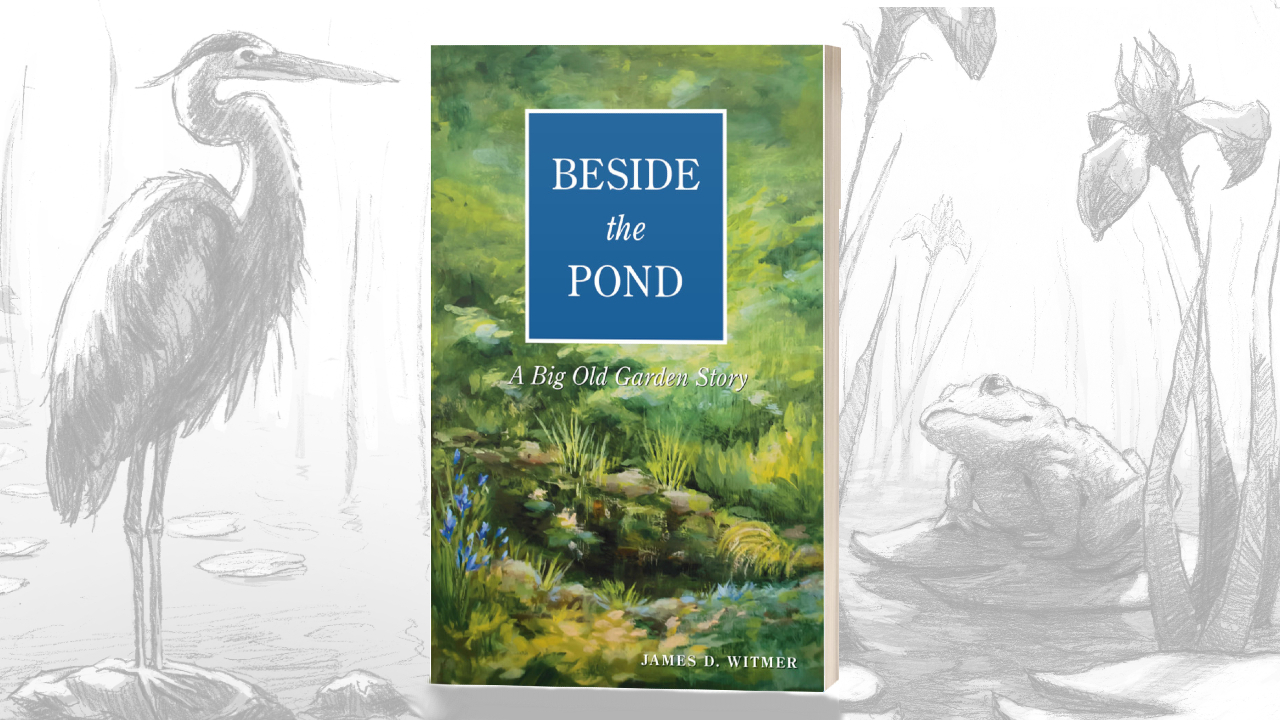 As a boy, I loved stories by Thornton Burgess, A. A. Milne, and Beatrix Potter. I think they helped me to discover the adventure, the personality, and the dignity in the natural world around me. Since the release of my first book, A Year in the Big Old Garden, I’ve been honored and delighted to hear that it has in some small way continued that tradition for young readers.

Now I’m excited to say there is an active Kickstarter campaign to fund publication of a sequel: Beside the Pond: A Big Old Garden Story. In it, fans of the Big Old Garden will meet new friends as well as some old ones, and experience the world through the perspective of a bullfrog who has a little problem.

Since Beside the Pond’s thirteen chapters can stand alone as individual stories (although taken together they tell a unified tale), I thought I’d share the first chapter here, with all our StoryWarren friends.

Beside the Pond, chapter 1 – The Smallest Bullfrog

In a little pond shaped like a crescent moon, in a big old garden behind a big old house, lived Ferdinand, the smallest bullfrog in the world. Well, that’s not quite true. Ferdinand had never been around the world, so it was possible that somewhere far away there was a young bullfrog even smaller than he was. But Ferdinand was certainly the smallest bullfrog in the Big Old Garden. He was unusually small, exceptionally small, and he did not like it.

When the warm spring sunshine washed over the little moon-shaped pond, Ferdinand wished he could climb up on the stones around the edge to sunbathe, like the bigger, white-bellied bullfrogs and the striped, shiny-nosed green frogs. But Ferdinand could not reach the stones so far above the water’s edge, so he contented himself with kicking his legs in the shallow water around the stems of water irises.

When Trixie the cat, or the little girl who lived in the Big Old House, cast their curious, prowling shadows over the pond, Ferdinand wished he could warn the other animals with a resounding croak and a mighty splash into the middle of the pond, like the bigger bullfrogs with their powerful legs. But Ferdinand’s voice only peeped, and his leaps did not carry him far, so he slipped out of sight into the shadowy water beneath the feathery fronds of fanwort.

When the pond’s nine goldfish darted through the water-lily stems like a flock of birds foraging for food, Ferdinand wished he could float serenely in the shade and let the fish find their way around him, like the wide, solidly-built green frogs. But the fish would slap Ferdinand aside like a water beetle, and he was obliged to climb out onto a lily pad when they came along.

It was at night that Ferdinand most regretted his very small size. He knew that, after a few more weeks had passed, all the bullfrogs would join together every night in their late-spring chorus. Then the voices of the biggest bullfrogs would boom like timpani, and the medium-sized bullfrogs would croak along—but Ferdinand’s voice would only peep, like a tree frog.

One early spring night, while Ferdinand sat in the shallow water between the iris stems and listened to the stillness, he heard a quiet sort of shuffling close by the edge of the little moon-shaped pond.

Ferdinand didn’t turn to look. He didn’t need to. With his round eyes placed right on top of his head, Ferdinand could see a long way all around and most of the way behind himself. He could see colors even in the dark.

What he saw now, shuffling along the path beside the little pond, was a little bigger than a cat, had fluffy silver-gray fur, pointy ears, a pointy face, a long and fluffy black-striped tail, and a mask of black fur around its eyes.

As the raccoon shuffled onto the flat stones surrounding the pond, Ferdinand kicked his way out of the irises and swam across the pond to the shelf of shallow water on the other side. There he sat with only the top of his head out of water, looking all around himself but especially at the raccoon.

His sharp little eyes followed moths fluttering high over the moon-shaped pond: large, rusty-brown moths bigger than Ferdinand, medium-sized moths in shades of tan and gray, and tiny white moths that might have made a nice snack if they had come close enough to catch. A brown bat circling even higher, swooping crazily as it chased its nightly meal of insects. The silent shadow of an owl moving from tree to tree as it hunted its nightly meal of bats and mice.

Splash! The raccoon moved with shocking speed and a ripping spray of water. Ferdinand’s eyes bulged as it leaned back on its haunches, both clever hands wrapped around one of the biggest, greenest bullfrogs! Ferdinand pulled his little head all the way under the water. In fact, he swam down, down to the bottom of the pond, where he huddled in the mud. He did not want to see the raccoon anymore.

As it happened, the raccoon did not visit the little moon-shaped pond in the Big Old Garden for several nights after that. Frogs do not have very good memories, so when Ferdinand did not see the silvery hunter, he did not worry about it, either. He had other things to worry about, like catching enough bugs to eat so that he could grow bigger, finding safe places for a tiny frog to bask in the sun, and avoiding the goldfish when they were being rowdy. And he had other interesting things to watch, like Jasper the chipmunk.

Jasper’s winter storeroom had been empty for several weeks now, and of course the only food to scrounge in early spring was food left over from last autumn, plus any seeds scattered under the bird feeders near the Big Old House.

Ferdinand floated at the edge of the little moon-shaped pond as the chipmunk popped out of his hole, scurried along the side of the pond, sniffed the ground this way and that, then stopped, jerked his tail, and ran towards the Big Old House. A few minutes later Jasper came running back with his cheek pouches stuffed full and disappeared into his hole.

When he appeared above ground again, Jasper ran all the way around the little moon-shaped pond sniffing and poking amongst the newly-sprouting sedge and hosta leaves. Ferdinand lost sight of the chipmunk behind a particularly large hosta, and only just glimpsed Jasper’s stripy tail standing up in the air like a flag as he ran back towards the bird feeders once again.

Being the smallest bullfrog in the pond prevented Ferdinand from doing many things. But it did not prevent him from watching, and he liked that very much.

If you’d like to pre-order Beside the Pond: A Big Old Garden Story, you can find the Kickstarter campaign here: https://www.kickstarter.com/projects/jamesdwitmer/beside-the-pond-a-big-old-garden-story-by-james-d-witmer