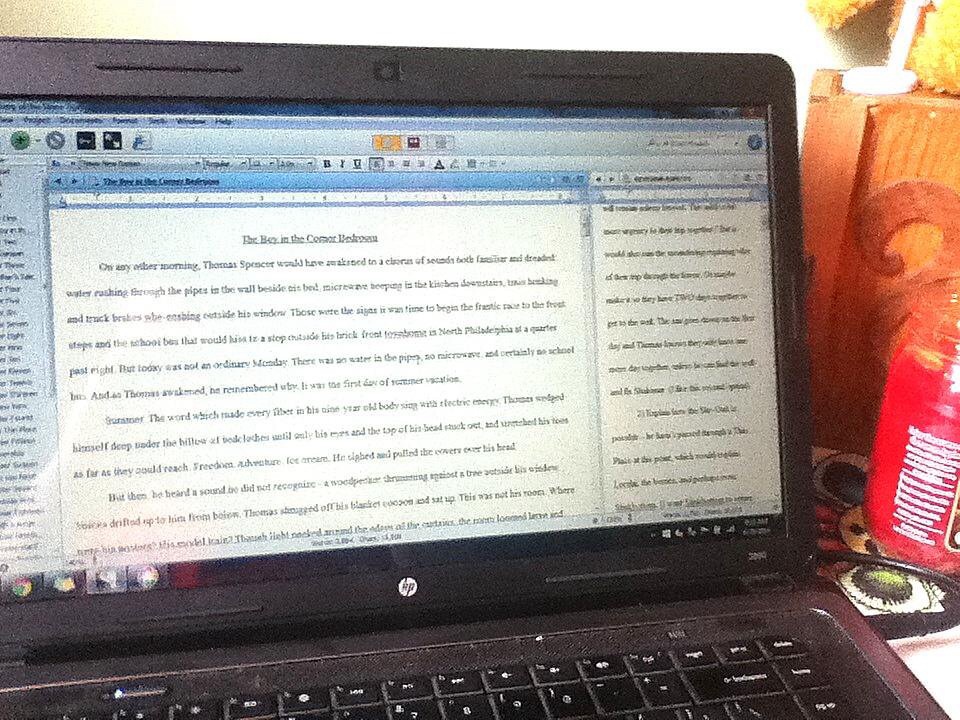 Confession: When I first got serious about writing, I did the coffee shop thing. I’d take my laptop down to the corner Panera and park myself in front of the gas fireplace with the other soup-lovers and pound away at the keys, feeling more confident with every passing minute that I was a Real Author. I suppose I was more sizzle than steak, at that point, to tell the truth.

Then, when we bought our house a few years back I began hunting for a spot to call my own. I set my sights on the shed out back. I called it a “studio,” painted the walls, hung a few pictures, and set to work. I soon discovered the Studio was not as glamorous as I had envisioned. In the summers, it was pretty hot. And there was the spider problem. The winters in Western New York? Forget about it. So I moved to the loft above the garage. It wasn’t insulated, but it was better protected against the elements. A summer passed out there, the weather began to turn, and I noticed the temperatures in November creeping lower and lower. No matter; I bought a space heater, threw on fingerless-gloves, and kept pounding away at the keys. But when Christmas vacation arrived, I knew this was folly; it was time to head indoors. Keeping a long story short, I wound up in a corner of our walk-in closet. It was cramped; it was cozy; but, it was also private. So, I rolled in the writing desk, set out a lamp and a few knickknacks, and kept working.

It was during my stint stuffed into the closet, my back to my wife’s wedding dress, that I had an epiphany about the importance – or not – of having a Special Writing Spot. It was during the phase when the boys were transitioning out of primarily picture books, and Danielle (my wife) and I were putting up some new shelves in the hall to hold our chapter book collection. There we both sat, spread-eagled on the floor of my closet writing spot, and began pulling out the classics: Nancy Drew, then Stuart Little, Ramona Quimby, Flat Stanley, Meg Murray, and many, many more. Something about the juxtaposition of these children’s classics with the room where I was working on my own stories, provided a thread to a thought which I began to follow. It’s since to led to more thoughts about where stories begin, and where they end, and why that matters.

As a child, I used to not even think of the authors. The characters – Louis the trumpeter swan, Wilbur the pig, the Hardy brothers, Tom Swift – were as real to me as my own brother. Their worlds were rich and vivid, their struggles captivating. But the authors remained mostly anonymous. After a time, I learned the authors’ names, which meant joining a tribe of sorts. When I finished one Grisham, I went looking for more. The name meant something. The voice could be trusted.

As I began to take my craft more seriously, I went hunting for more information about the authors – how they worked, where they drew their inspiration. As a result, they became larger than life, and I began to picture them as otherworldly magicians, weaving spells, conjuring their stories from sumptuously-furnished rooms with thick carpets on hardwood floors, classical music playing, even a candle or two burning. A true environment for novels being written, no?

Which brings me back to own nomadic quest for my own personal Xanadu.

Yes, authors are magicians, in a manner of speaking. But, chances are the magic is being made in a room less like the one in my fantastical daydream, and more like the one in my own house. It’s a cozy room just off the kitchen where, most Saturday mornings, I can hear the sounds of lightsaber battles and laughter from the living room. What I’ve loved most about being here is that my boys can wander in, hop up on my lap for a minute or two, scan the sentences on the screen, smile, nod their approval, or ask a question or two. They’ve seen behind the curtain, so to speak, and I hope seeing creativity in action can demystify the process, make it seem less out-of-reach.

Stories come from anywhere, and it’s important that we know this. It’s important that our children know this, too. Because somewhere, some day, my child, or yours, or any other one, will discover a room with just the right amount of headspace, and daylight, and wonder, to begin working on their own story.

And then, the cycle begins again.