The snow crunches under our feet as we traipse out to the van. I tell him it’s slickery and he should watch his step. He laughs his response, “Mom, that’s not even a word!” Then his nimble fingers slip lightly into my own. Just in case.

I snap carseat buckles and crank the heat up high. They settle in for the ride, hands full of matchbox cars and still sticky from peanut butter sandwiches. I can barely feel mine on the steering wheel. Numb.

It’s a few miles down the road before I notice suspicious quiet from the backseat. I glance around and they’re watching out the window. One looks back at me, quick to smile and ready to respond. The other is very far away. I can see it in his eyes.

“Whatcha looking at, buddy?” I ask.

He might be struggling to pull himself back to this reality, I can’t tell, but he hesitates a moment before he answers.

“Mom,” his voice finally comes, “do you see the trees?”

I follow his gaze and glimpse their bare branches. Snow perches on the boughs, trunks and limbs. Some lay still and broken along the ground, but many withstand winter’s pressure. They are the strong and silent type.

As if he could read my thoughts, he pipes up from the backseat, “Can trees talk?”

The innocence sparkles in his eyes and I don’t take for granted that he asked me. I love, in fact, that he asked me. Because where does the self-consciousness come from that we know in our latter years? The kind that would interrupt and silence such questions before they could be uttered? The kind that we all know which whispers in our child-like ears, “Everybody already knows that. Don’t ask such a ridiculous question.” That strike us all dumb with fear that certainly everyone got the memo about this but me …!

But I want no part in the development of such hindering. And so I meet his eyes with the warmest welcome I can muster. “I think they do tell us things, Jeremiah. But not with words we can hear. Like right now. Look at the trees. They are bare. What does that tell us … ? That it’s winter! And in a few months, they will pop with buds in bright green – then we’ll know that it’s spring. They tell us things in the summer and in the fall, too, don’t they? But none of them are with words.”

A brief light passes over his face. I recognize it immediately: wonder.

And in the same second I am painfully aware of those who might begrudge my explanation – in fact, many of them take up residence in my own head. They remind me that creation is groaning, and trees none the less, under the weight of a fallen world and is it responsible in the least to tell anything but this to my wide-eyed son? Shouldn’t I prepare him instead for the heartache that faces reality? Shouldn’t a mother brace her son for the flat, colorless world where cold, hard facts trump imagination and what might be is never as reliable as proof in the pudding?

We ride on in silence, both of us swimming in our own thoughts. I imagine what is behind his eyes: a world of enchantments and magic. An unexpected world where light could burst forth at any moment from the snow or through our very skin – and equally as likely. I want to stay in this world with my four-year-old. This world hedged in by creativity and the audacious belief that anything is possible. A world where even the faintest nuance of wind bears witness to the Divine. Where trees carry messages of deep healing. A world where curiosity is safe and questions don’t get you laughed at, where those who know share a wink and a smile because nothing is as nailed down as everyone else seems to believe it is.

I glance behind me, wistful around the smile. His long eyelashes blink slow, sleep beginning to overtake. I turn back to the trees in their splendor. They lift up their arms in a blessing. They shimmer in the hint of crystalized sunbeam, trembling with more than frost. And their beauty is deep shalom in my bones.  Yes. I choose to stay here. I want to whirl in the perhaps, I want to drink what if to the dregs.

And I want to keep my ears open. You never know when the trees might give up their groaning and sing. 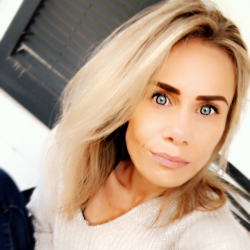 Kelli Owens
Kelli lives in the American Midwest, surrounded by cornfields and love, with her seven blue-eyed children. They collaborate and debate, laugh and play, fight and mend, but they don’t do anything that even slightly resembles quiet. Unless it’s listening to their lives, which has proven to be the biggest challenge of them all.