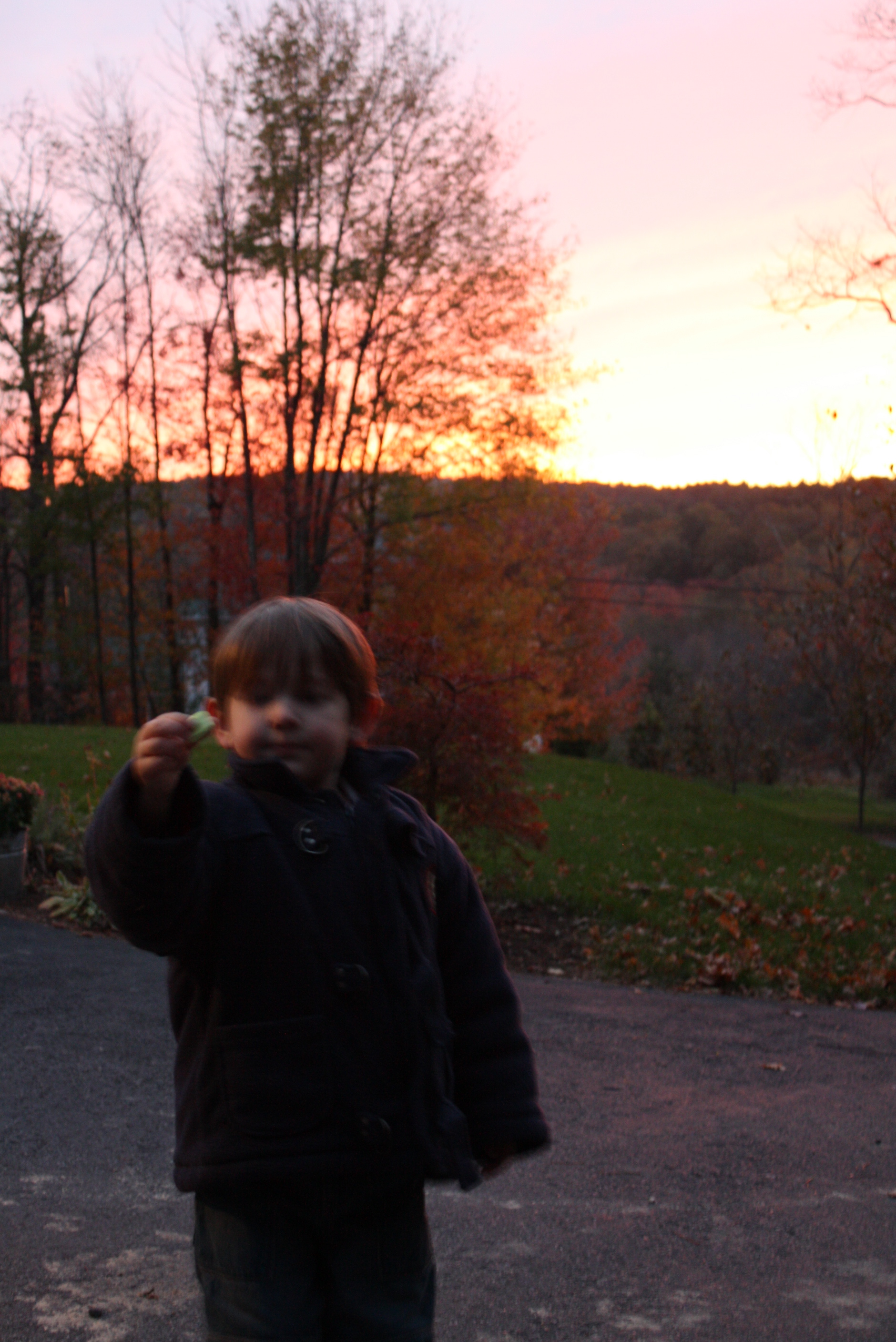 Two years ago, on a blustery October day just like the one out my window, I took a walk with six children down a country road near Boston. When it was over, I felt that I had sojourned in a different world and I almost hated to come back to my own. It wasn’t the low burn of the maple leaves alone, or the late-setting sun tangled in the branches, or even the scattered gold of the leaves up the black ribbon of the road. It was all of those things seen through the eyes of the children at my side.

Our adventure began when I offered to take the oldest girl, nine-years-old, on an autumn ramble. We tried to escape for a special hour, but siblings can sniff such treachery a mile a way. We didn’t even have our boots on before the other three were at the door, clambering to come along. My dear little friend resigned herself with a roll of the eyes, and the five of us tromped outside. Before we reached the end of the driveway, two neighbor girls had been recruited. When I went to ask their mom’s permission, she gave a quick yes, then raised her eyebrow and asked me if I was crazy. “Six kids under nine and you by yourself?”

I smiled my acceptance and we seven took off down the open road with windy fields and golden forests all around us. After all, how hard could it be to corral six kids along a country road? Not hard at all, until you suddenly need them to get off the road. I glanced behind me and saw, of all things, a police car patrolling our rural road. Six bundles of restless energy shot up the street before me, entirely beyond my reach. I had an idea. “Guys,” I yelled, “we’re going to play a game. Let’s pretend we’re sailing a ship and if we see pirates we have to hide. When I yell “Pirates!” you have to get off the road and into the bushes as fast as you can, okay?” I saw at least four or five of the little heads nod and crossed my fingers as the patrol car crested the ridge.

“Pirates!” I bellowed. Without a second glance, without an instant of hesitation, five of them dove for the bushes, and the sixth, the littlest one, grabbed my hand. I scooped him up and the seven of us stood neatly off the road as the car drove by. To my amusement, my six pixies waved their hearts out to the policeman/pirate, and he grinned back. I was rather pleased. When he was gone and we scattered over the road again, another idea came to my head.

“Let’s look for treasure. Do you want to?” And that began an hour of curiosity and wonder such as I have rarely known. Every fallen maple leaf and cedar berry, every half-wilted fern or grass stem became a handful of jewels, a bag of coins, a wand of woven silver. Soon, my little friends weren’t even pretending. They were fascinated by the autumn earth and everything they encountered was deemed a treasure. The world was chock-full of nuts and leaves and berries and colors precious as any pile of gems. When my hands were too full to carry anymore of their finds, we sat on the side of the road and admired them, one by one.

When we reached home and stumbled into warm rooms and a waiting meal, I felt a bit dazed. “You made it okay?” my friend, the mother of my pixie companions, asked. I nodded. But I had done far more than merely survive. I felt that the world had been re-enchanted. My busy eyes, glazed over by hurry, had been cleared so that I saw life in the same light as my small friends; the world as an adventure story, the earth as a treasure chest, and all of it open for the finding.

This morning, I read a passage in Ronald Rolheiser’s book The Shattered Lantern, and thought of that walk. Rolheiser writes of the way that most adults lose the felt presence of God because we lack a contemplative view of the world. But children are different, he says, for “a child is a natural contemplative, constantly wondering at. For children, everything is laden with aesthetic and supernatural dimensions,” and something as ordinary as the hatching of a chick can be “magic, a wonder, a miracle, creation itself.”

What a gift to have a view of the world like that. And what a precious thing to cultivate and keep in the little ones around us. I sometimes feel that we hurry children away from that state of wonder. We look at education of mind and spirit as a steady growth toward knowledge, efficiency, and increasing productivity. We live in a culture where we measure success by how much you know and accomplish, and however much we love the innocence of children, we are in a hurry for them to get with the program, learn the facts, and do what is required. Yet that capacity to wonder, to look with unhurried eyes, to savor the beauty of the ordinary as something sacred – it isn’t just a nice way of seeing the world. It’s a true way. And one I want to protect for my little friends, and my own heart, as long as I can.

Sarah Clarkson
Sarah Clarkson loves books, beauty, and imagination. She is the author of Read for the Heart, a guide to children's literature.
Latest posts by Sarah Clarkson (see all)