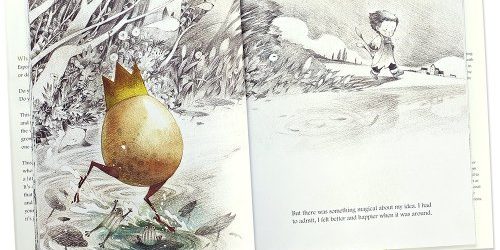 I read about Kobi Yamada and Mae Besom’s What Do You Do With An Idea? on one of those lists that all of us parents bump into somewhere or other on the internet. I checked it out from the library while we were on vacation and read it to the kids. They were delighted with the book and asked me to read it again. It could have been Mae Besom’s illustrations that caught them. Her careful introduction of color into charcoal pencil illustrations is certainly intriguing. Or maybe they just enjoyed watching the “idea”, rendered as an egg with legs and a golden crown, as it scampered over the pages. I can’t believe they understood the full weight of what Yamada was saying, however. That impact fell on me.

How I wish I had seen this book as a child! It is embarrassing to have an idea, easy to disregard it if others aren’t quick to see its value. But we share the mind of the Creator, and God is always at work in our imaginations, planting awkward little seeds that grow to be wonders.

What Do You Do With An Idea? may prove a great encouragement to you and your children. It may help you recognize and nurture the little gold-crowned eggs that turn up in your heads. The color and beauty of its final pages might buoy you over the fear of those tentative early steps. In the end, I hope you’ll unleash all those beautiful ideas on the world. We can’t wait to see what you have in mind.