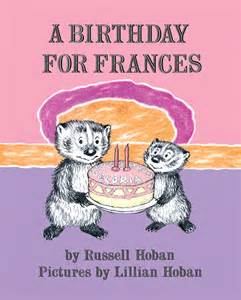 It was tough to choose just one Frances story to review. I almost went with A Baby Sister for Frances, one of the few books I remember owning and reading as a child. It’s a delightful story in which Frances deals with the intrusion of a new baby sister by “running away” to a cozy spot underneath the kitchen table with a bag of prunes and a box of chocolate sandwich cookies. She sings about the hardships of a big sister’s life while listening in on her parents’ conversation about the sad departure of their eldest.

I could have gone with Bread and Jam for Frances, another wonderful book in which Frances decides that she doesn’t like to try new foods. “With bread and jam,” she says, “you always know what you are going to get.” Her mother humors her, feeding her nothing else for five or six meals, and Frances’s joyful impromptu songs about the beauties of bread and jam slowly turn to dirges.

But it’s A Birthday for Frances that really takes the cake. This is the one that starts the kids giggling, the one they quote lines from and beg me to read again and again. This is the one in which Frances has to face the fact that she is not the birthday girl. It’s her baby sister, Gloria, who is turning two and getting all the presents and attention.

Frances makes a selfless choice and asks her parents for her next two allowances so that she can buy Gloria four balls of bubble gum and a Chompo bar. Her father complies and takes her to the candy shop, but it’s not easy to use up two whole allowances on a gift for someone else. On the way home, Frances expresses her concerns about whether or not Gloria is even able to eat a whole Chompo bar and whether or not so much candy will make her sick. While she talks, she unwittingly pops all four bubble gum balls into her mouth. Her father takes the Chompo bar for safekeeping.

On the day of the party, Frances still hasn’t made up her mind, so she works through her doubts with her friend, Albert. He understands that sometimes little brothers and sisters don’t deserve Chompo bars. Sometimes they “pull the button eyes off dolls that have button eyes (and) break your crayons so there are no long ones left in the box (and) put water in your mud pies when you don’t want them to.”

When the big moment comes, and everyone has sung “Happy Birthday,” and Gloria has opened all her other presents, Frances gives in. She overcomes her longing for the Chompo bar, gives it a final, farewell squeeze, and offers it to Gloria. Because Gloria, not Frances, is the birthday girl.

I love Lillian Hoban’s simple, cheerful illustrations, and I love Russell Hoban’s Frances stories. Frances works through childhood challenges with energy and intelligence. She writes witty little songs about her feelings, and her parents listen and respond like adults. They allow her to make choices and face the consequences of her choices (a parenting skill much needed by our generation), and they’re unruffled by her childish outbursts. In all her exploring, all her discovering, there is a sense that the world is unshaken, that things are secure. It’s an atmosphere that marks all Hoban’s books, including Bedtime for Frances, A Bargain for Frances, and Best Friends for Frances. His stories are funny and wise, and they’ve stood the test of time. They would make excellent additions to your library.