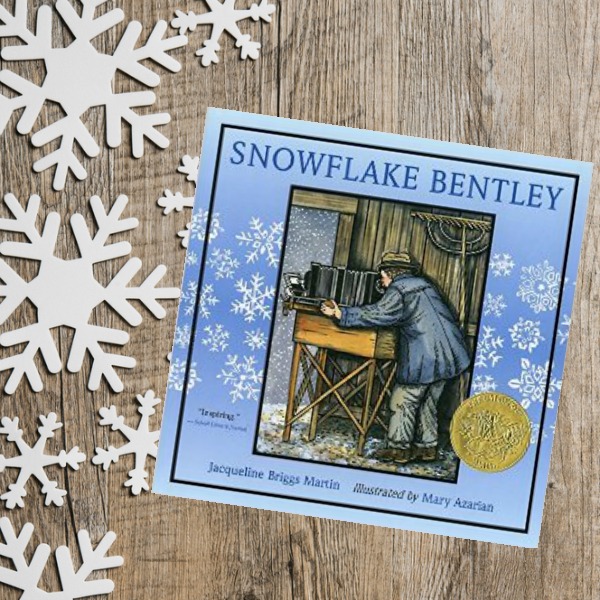 “In the days when farmers worked with ox and sled and cut the dark with lantern light, there lived a boy who loved snow more than anything else in the world.”

If you haven’t bought a copy of Doug McKelvey and Jamin Still’s “Stories We Shared,” I highly recommend that you do. This book journal, a lovely tool for chronicling your family read-alouds, also includes a variety of reading quests that make for fun challenges during these quiet summer days. My kids are 8 and 5, and we decided to tackle the Caldecott Quest first. We put dozens of picture books on hold at the library, and we’ve checked them off the list one by one. Many, like Madeline’s Rescue, Jumanji, Owl Moon, Time of Wonder, and Sylvester and the Magic Pebble, were already familiar. Others, like Sam, Bangs, & Moonshine, The Fool of the World and the Flying Ship, Ox-Cart Man, Mirette on the High Wire, and A Sick Day for Amos McGee, have proven to be delightful surprises.

Snowflake Bentley, by Jacqueline Briggs Martin, was one of these. Mary Azarian’s woodcut illustrations tinted with watercolor are cheerful and homey, and the story is based on the life of Wilson Bentley, born in 1865 in Vermont. From his earliest days, Willie was enamored with snowflakes. It troubled him that while he could show a butterfly to a friend or pick a bouquet of flowers for his mother, he couldn’t capture or share the beauty of snow. In time, he got hold of microscope, and he used it to study ice crystals. He stood for hours in the snow, hardly breathing, catching snowflakes on a black tray before rushing inside to glimpse the flakes through the lens of the microscope and sketch the designs on paper. The flakes always melted before he could finish.

When Willie was a teenager, his parents spent their savings to buy him a camera with its own microscope. A full winter passed before Willie got so much as one decent shot with that camera. He dedicated long hours to perfecting his technique, and the next year Willie began his collection. While the neighbors laughed, saying that “snow in Vermont was as common as dirt,” Willie replied that there was nothing common about snowflakes. He insisted that these photographs would be his gift to the world.

Willie put his pictures on cards and sold them for a few cents apiece. Colleges and universities began to buy lantern slide copies of his photographs, and when he was sixty-six years old, Willie’s book, Snow Crystals, was finally published. Right up to the time of his death, Willie persisted in his work. He told a friend, “I can’t afford to miss a single snowstorm. I never know when I will find some wonderful prize.”

A plaque stands in the town of Jericho, Vermont, commemorating the work of “Snowflake Bentley.” It isn’t much of a memorial. Willie spent far more money on his work than he ever earned. But I love this glimpse into a life driven by love. Wilson Bentley loved snow. He invested his time, his money, his life’s energy into the study of something to which no one else gave a second thought. What others saw as common, Wilson Bentley saw through a lens of wonder and delight. His commitment and devotion have given us new eyes, and even today, those who wish to study snow crystals begin with Willie’s book.

Snowflake Bentley received the Caldecott Medal “for the most distinguished American picture book for children” in 1999. It’s available at your local library.