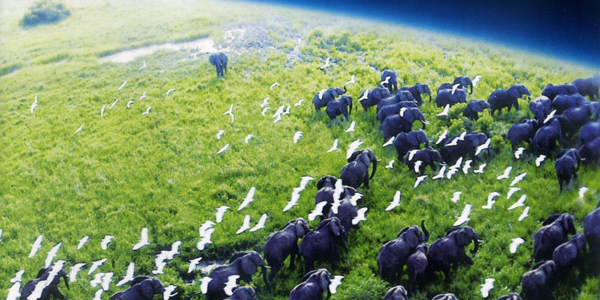 The year was 2007, and Jon and I were living in a miniscule house in Valrico, Florida. We had no children, and we both worked, and there wasn’t much else going on in our lives. Then, out of nowhere, something lit up our Sunday evenings.

In those days, we attended church on Sunday mornings, ate lunch, endured a purgatorial waiting period of maybe 2 hours, then returned to church for choir practice and an evening service. Sunday nights were pretty grim. There was the usual dread of the coming workweek combined with the fatigue that must follow a full day of services.

Enter Planet Earth, a series of nature documentaries. That’s right. We sped home from Sunday evening services, threw some pizzas in the oven, turned on the first real TV we’d ever owned, and sat goggle-eyed while giraffes lumbered over the African plains and baby wood ducks tumbled from their lofty nests. I remember the moment when the great white shark leaped from the ocean and caught a seal in its jaws. All the air was sucked out of the room. It was too spectacular. The shark was enormous, and every droplet of water that spun from its tail was crystal clear, an individual miracle. I thought I had seen a good deal of the world, that I knew how miraculous God’s creation was, but I was mistaken. It was so much more magnificent than I’d known. It was stunning, outrageous! As a woman of 26, I needed to be reminded.

Ten years later, my husband and I live in a different state. I have a different job, and our children are school-aged. When we saw that the BBC was creating another Planet Earth series (this one ten years in the making instead of five), we flipped. We knew we’d recapture the excitement of the first series, and this time we could share it with our children. That’s just how it happened. The kids squealed with delight over each new episode, and we all sat glued to the TV, marveling at this incredible planet, seeing it as if for the first time.

I wouldn’t dream of cheating you out of the wonder and surprise of Planet Earth II, but I’ll share a few highlights to whet your appetite. In this second series, you’ll see golden eagles flying over the Alps, with camera shots designed to mimic the eagle’s perspective. You’ll watch a courtship dance performed by a colony of flamingos high in the Andes. (They live in a lake that freezes over every night, trapping their spindly legs until the sun rises.) You’ll hold your breath while a newly hatched marine iguana hurries past colonies of watchful racer snakes, or a young Nubian ibex clings to the slightest variation of texture in the vertical rock faces of the Arabian Mountains. You’ll laugh when the Jackson’s widowbirds perform their mating dance, the males with their shiny black feathers bursting like kernels of popcorn out of the grasses. You’ll gasp as the desert long-eared bat battles the deathstalker scorpion and sigh when the father spider monkey makes a bridge with his body so his daughter can climb to safety.

There are such things as luminous fungi and railroad worms. There are hummingbirds whose bills are longer than their bodies. There are fields dotted with termite mounds nine feet tall that always run along a north/south axis. “There are more things in heaven and earth, Horatio…” So many more!

The world is so full of wonders, in fact, that we can scarcely keep from praising the Creator for His lavish, wasteful abundance, His infinite imagination, and His tender care of our home planet.

You can watch the six episodes of Planet Earth II on BBC America.