I’ve shared posts about hospitality before, so I hope I’m not beating a dead horse, but I felt like this one gives such a good biblical perspective on the act that I had to share it with you. Hospitality is an art form, one that even those who want to call themselves “not creative” can participate in. At the Mom Initiative, Lynn Mosher shares her thoughts on hospitality.

26 Essential Jokes Every Dad Must Know

Dads have a sacred duty to their families: they are the ones to must tell bad jokes. In case you didn’t know this, or if your arsenal of dad jokes is running low, Buzzfeed had 26 brilliant groaners for you. For example:

So, “new” may not be the best adjective for this piece, as it was actually published in 2012, but it just came across my radar this week and I thought it was pretty cool. Evidently a collection of fairytales gathered by historian Franz Xaver von Schönwerth had been locked away in an archive in Regensburg for over 150 years. Some of them are regional  versions of familiar stories, but others are entirely new fodder for the imagination.

5 Things to Avoid As an Introverted Parent

I know many introverted parents. My sister, who shared this post with me, is one of them. There’s some good wisdom in here from Kristen Brunner.

Kelly Keller shares some good thoughts on taking the time to stop and listen.

The words of Antoine de Saint Exupery. The artwork of Paul Boekell.

A Library of Their Own

Liz Cottrill suggests using this summer to help your kids build their own personal libraries.

Helena Sorensen and Breezy Brookshire pair up to bring us the tale of Cora’s lovely new party shoes. Helena’s tale and Breezy’s illustrations are a delightful combination.

Math has never been my favorite thing. Once we passed counting beans and blocks in first grade, it was a mystery to me. Maybe, though, if I’d played calculator hopscotch, I would have enjoyed it a bit more! Learn how to play at Parents.com.

My friend saw Jurassic Park for the first time this week–in preparation for the upcoming Jurassic World release. She texted me to tell me about it and I vividly recalled my first time seeing it. “It was a formative movie experience for me,” I texted back. “I was in sixth grade and it was the first blockbuster I ever saw in the movie theatre, and I was intermittently thrilled and terrified. My parents were sitting with their friends a few rows behind while I sat with the other kids. It was like we were out on our own.” Maybe your kids are old enough to have that experience when the new movie comes out this summer. Maybe not. Maybe dinosaurs aren’t your thing. But everybody likes cookies, right? And this Jurassic Park parody from Sesame Street is kind of brilliant. 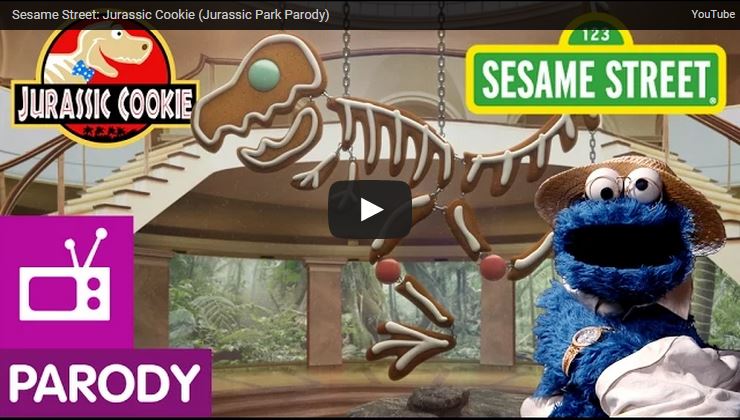