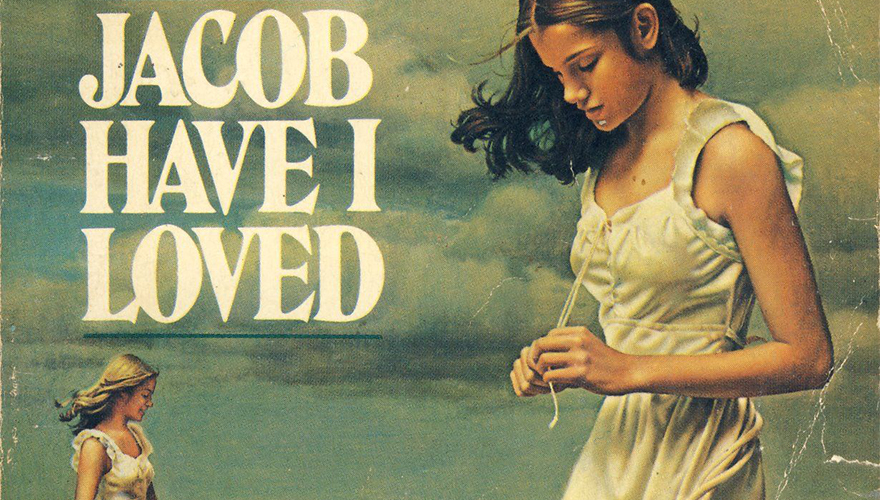 Anyone who has grown up as a sibling knows there is emotional processing that continually goes on as each sibling deals with the attentions, or lack of attentions, of others. Sibling rivalry and jealousy are natural things. I see it in my children as they fight for the front seat of the car. I see it in their longing to have what the other one has merely because they do not. Even as adults, we get the idea that somewhere else or with someone else, life would be better or easier. We are sinfully wired to listen to the whispers that we are being left behind or forgotten in the shadows.

Jacob Have I Loved by Katherine Paterson is a story about siblings, but even more it’s a story about a child trying to figure out how to move out of the shadows and into her own sunlight. At the opening of the novel the narrator, Louise, is just moving into teenage-dom. She lives on a small island in the Chesapeake Bay in the 1940s, just at the cusp of World War II. Her father is a waterman and she finds herself out on the water too, catching crabs and all sorts of other things to help provide income for the family. She has a twin sister Caroline who is everything she isn’t. Caroline doesn’t fit on this island of boats and crabs and oysters. Caroline is dainty and a beauty and has a special gift of singing. To Louise, it appears that her family goes out of their way to advance this musical gift, using much-needed money in order to provide her with singing lessons on the mainland.

And the whispers begin.

What Paterson does so well is showing the angst this sibling rivalry causes Louise. Paterson’s greatest gift is her ability to give voice to the young girl growing into womanhood and all the mental and physical struggles that occur during this crazy time of transitions. Even in my mid-forties, I hear internal voices like Louise’s and can remember my 13 year old self feeling exactly the same way.

Oftentimes Louise’s shadows are cast by her own decisions. She is constantly striving to make her own way, by secreting away her crabbing money, and by her attempts to become a famous whistle-blower by exposing an island spy. Louise casts these shadows all the while hoping that she might be seen for who she is. But instead of stepping out, she just continues to believe that the only way to be of use is the stay in the shadows. She knows that Caroline is not bound to this island and to her parents, so Louise sits underneath the shadow of a self-imposed responsibility to her parents and the people of her island. But it’s through her friendship with this “spy” that she finally starts to move a little out into the light. In her willingness to open herself up a little and see outside of herself, she begins to realize that the advances in her sister’s life don’t negate the goodness that she does in her life. She begins to give herself permission to think about what she wants for her life; even if that means leaving the island. As she walks more into the light, we begin to experience her bravery. All along it seems like Louise is moving towards being a selfish, narcissistic teenager, but Paterson throws literal storms into the narrative that force Louise to make the choice to grow up.

Finally, we see Louise take the brave step off the island and into a career choice that wasn’t easy for a woman in the 1940s. Her life on the island wasn’t ever typical for a girl. During the war, when most of the men were off fighting, she ends up helping her father as a boatman. This drive to break molds continues as she matures and goes to University and fights her way as close to being a doctor as she can be. But we lose the sense that she is doing this in order to upstage her sister and realize that she is experiencing the life that grows when you move out of shadows and into the light.

In the end we realize that Louise was being groomed all her life to live on a different island. God guided her away from her island life hemmed in by water to plant her in a valley “island” surrounded by mountains. The bravery we saw towards the end of her teenage years on her island, is explicit as she cares for these people in the mountains. The growth that Paterson develops in the character of Louise is what I long for in my children and even in myself: to be willing to recognize giftings and desires, to go after those and to use them to help others–And ultimately to live freely in the sunlight.

Aimee Davis
Aimee doesn't remember a time when words weren’t constantly roaming around in her head. These days she spends her time chasing words and thoughts while she mothers and homeschools her children, and learns to love her family and friends well.

She savors quiet moments with a cup of tea, when she's able to catch those words and find the courage to write them down.