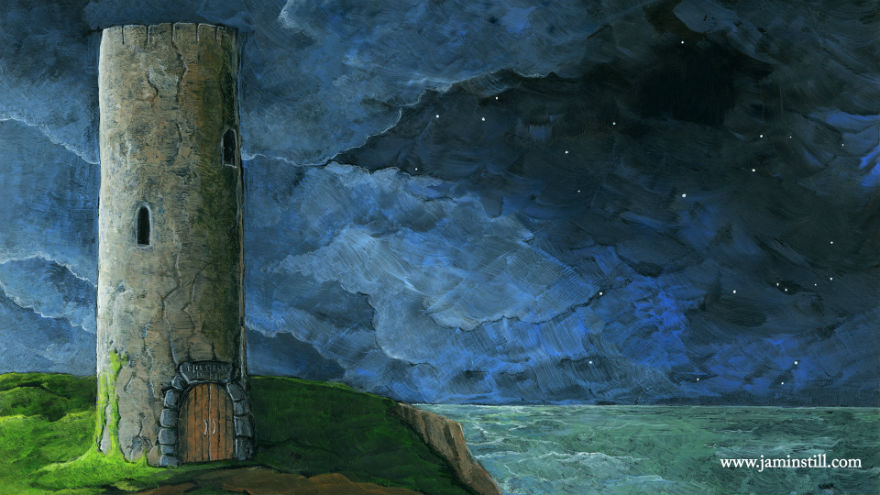 EDITOR’S NOTE: After you read this lovely story, scroll down to download Jamin Still’s magical painting as a free wallpaper.

All that his unquelled grief bestowed,
and love, that doubles grief
-Boethius

In a tower, in a village, in a kingdom by the sea, was a lyre unlike any other. Over the door of the tower stood ancient words:

The rest was worn away in over a century of ice, snow, and rain.

The lyre had been formed of a single substance, with coarse strings. It could not be tuned, and striking the strings produced only pain to the fingers and ears. People said its maker could play so beautifully that animals would follow him and birds cease to sing: rivers paused and rocks danced. Even death lessened its severity, till the lyre could be heard in a silent land.

No one else ever knew how to play it.

To this village came a child – no one knew how. He was found beside a hut belonging to an old woman. She took him inside, wrapped him warmly, fed him, and rocked him to sleep. She sang:

O beggar man who might have been a king,
ask me for bread, a warm place by the fire, a bed
and though I’ve scarcely anything,
you shall have half of all the tears I shed
and all the songs I sing.

As he grew, she sang many songs, but he could not sing with her – he was mute. He had no gift of words. Other children could open their mouths and the air would be full of sounds. His mouth was empty.

But he had magic hands.

They looked like everyone else’s till he cupped them in the sea. Then fish would dart out, tickling between his fingers. When he held them in air, they were filled with fluttering, till white birds flew away. If he cupped them in grass, little creatures with trembling whiskers would scurry and hop off.

The boy’s creatures, like himself, could form no words, but he understood them.

He was a maker, people said. They read the words on the tower, and told the lyre-maker’s tale:

On his wedding day, a serpent bit his bride, and she was dragged to the underworld. The maker traveled to the underworld after her, playing his lyre. The ruler of that shadow place was so moved by the song that he allowed the maker to lead his bride back to light. Yet if the man turned to look at his desire before he reached the upper realm, she would vanish away a second time.

Light had not yet broken from the upper regions, when he turned. That was why no one could play the lyre: the maker had ruined his own work. He had untuned it with grief. Yet the words on the tower said it would yield music again one day, to rare hands.

Often the boy touched the strange lyre that like wind, had shaken shadows. Even his hands could not draw its music. It was not air, sea, or earth; and when he touched its strings, his hands remained empty.

His own story was told through the kingdom; and after some years, the king took him away from the village and the old woman to a city with a castle. He slept in a room by the castle garden, where lords and ladies came to see magic hands held in air till birds flew from them, or in a brook till it flowed with flashing fins.

How he longed to hold his hands in something till they flowed with words – with sounds fluttering like wings, till he flew out of himself.

The ladies clapped their fans and tried to make pets of the creatures. Two birds were caught, and a cage made by a skilled carpenter. He carved it entire from a single tree. Only the hinges and latch of the door were carved separately. The boy understood each creature he made. Since his own tongue imprisoned him, he especially understood these caged birds.

One day, there was a fire. Lords and ladies, servants and soldiers scurried from the flaming castle like bunnies or moles from his fingers; but the boy pushed past them, rushing in.

His birds were trapped.

Many furnishings had taken fire. His birds were singing on their perch, in a cage of flame. He unlatched the door and reached in to draw both out, but only one flew free.

That is how he lost the magic in his hands. They were scarred afterward: when he held them in air, in the brook, or over earth, they were empty – empty as lips when he cupped them, but formed no words. And that is how he flew free. The king sent him back to the village by the sea.

The old woman now lay ill. She did not recognize him, and he could sing no songs to bring remembrance. He could only share half of her tears.

One evening as he walked near the tower, its words glowed a mute strain of song:

He went in and stood by the lyre. He was no longer a maker; and he had been unable to draw its music when his hands were whole. Still, it reminded him of the cage in the castle, and he reached to touch one of its coarse strings. A clear note sounded – a fragment of birdsong. He touched another, and the note was small and shining like a star. He touched two strings together: they were like two birds singing in a flame.

He stilled them: such thinly carved bars they were. And suddenly he understood the secret of the lyre. It was not water, or air, or earth. It was pain. To turn it to music, he had to reach into a burning cage, and draw out a bird.

As he played, villagers arose from their firesides to stand in their open doors. Home-light spilled around them while they came out into darkness to look up at the stars. For the stars shone like notes of music through dark bars.

In her hut, the old woman rose and thought heaven looked strangely beautiful – as if a white bird had flown to her window, and sat singing to her.

Early in the 6th century, a brilliant Christian theologian, philosopher, and statesman was accused of treason, soon to die a barbaric death. In these painful circumstances, Boethius wrote a story of how Philosophy, as a woman, came to comfort him.

She sang a song that retold an ancient myth: the Greek story of Orpheus, who had played the lyre so beautifully and traveled to the underworld to reclaim Eurydice, his bride. Philosophy sang of how Orpheus drew on all his depths of grief and love to play so movingly in the underworld. The quotation at the beginning of this story is taken from her song. She explained that we are all like Orpheus, trying to lead our minds to light. We must not fasten our gaze on earthly things, for they will vanish.

After his death, Boethius’ book, The Consolation of Philosophy, became one of the most important books in history.

To download, click the links below to open your image, then save the image to your device.