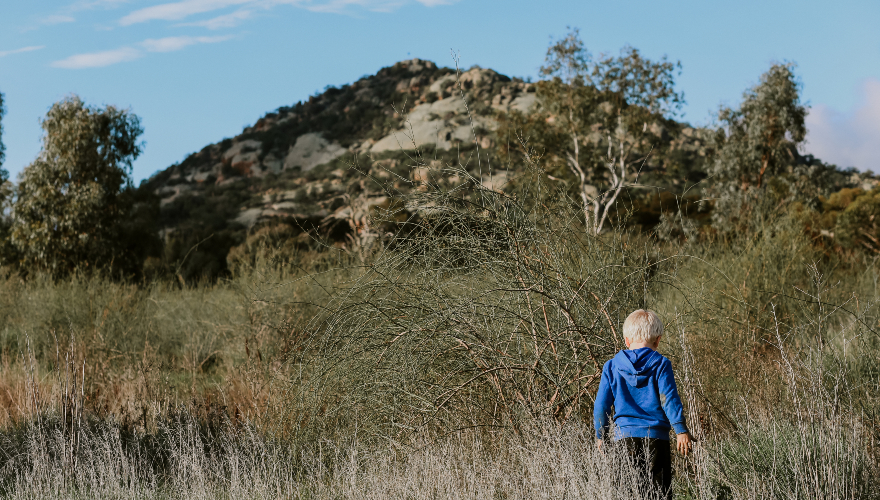 We have a wild child. A full-fledged Lost Boy. His name is Lachlan. When he was 2 he was permanently uninvited from being in the church nursery because he figured out how to escape all the child locks and was making weekly Sabbatical pilgrimages to the church parking lot, unnoticed. When he was three he snuck a pair of scissors from who-knows-where during co-op and cut his favorite superhero shirt to pieces, while it was still on his torso. Our Lachlan would watch us, waiting until we’d look away, and bolt to the nearest arcade game or parked motorcycle, whatever was shiny and looked totally off limits. He was born to front load some major lessons in life.

The day that broke me, were moving into a new house and he took off—in just a diaper—toward one of the busiest streets in our city. My husband and I were too far away to get to him in time; I tried to scream his name but choked instead—the fear was squeezing my throat shut. Max yelled loudly enough for both of us as we ran toward him. Just before Lachlan reached the road, a man on a bike, wearing a white shirt, pulled up next to him, popped his leg down to steady the bike, picked Lachlan up, chubby legs still pumping, and lifted him over our fence, safely back into our yard. He didn’t even turn around—we never saw his face. He just lifted his leg back up and pedaled onward.

That night, after tucking all the kids in, my emotionally brittle heart finally let go and I wept.

I confessed to God that I couldn’t do it—I could not keep his little boy alive. I could not keep a boy like him from loving danger, from actually seeking ways to escape me and run to everything he was supposed to fear. I confessed that I was so scared that I was distancing myself from Lachlan, interacting with him mainly when I needed to correct or warn him.

I was scared of how much it would hurt if I lost him—but that day I realized how wrong I’d been. Whether or not I was acting affectionately toward my little boy, I loved him deeply. And I didn’t know what to do. I didn’t know how to protect Lachlan, or myself, from some tremendously scary life lessons that were sure to come, unless he changed dramatically. I didn’t know how to let go and love someone who made me feel that scared. And what I really didn’t know was how to trust God with him, and with my own heart.

So that night I cried, and I prayed, and I confessed. God gave me courage to look really hard at what was scaring me so badly I’d withhold affection from my son. It wasn’t fear of death, or fear of suffering because of my children. It was fear that my faith wouldn’t make it through that awful trial. I was afraid that, if God gave me a boy to love and become attached to for two years and that boy died, I would never trust or believe in the Creator again. In that moment before the bike rider appeared, my thought was simply, Oh God, no. I won’t make it if something happens to him.

That’s a hard thing to acknowledge, a hard thing to see. But once I saw it, God gave me the Truth to set me free from the bondage of that fear. He brought True Words to mind: God is Sovereign. He is totally in control. His ways are not my ways. He has plans; plans to give us a Hope and a Future. Fear of the Lord is the beginning of wisdom. Death is not the end. And the good songs began playing in my heart, and as St Augustine would say, I sang the truth into my soul:

Letting go of the illusion of control over a child and their future is a battle hard-fought and humbly won, with the help of the Helper. As much as I prayed for smoother sailing and a change of heart in our child, I realized then, and know for certain now, that that feeling of helplessness was deeply good for my dependence on God, and for seeing His sovereignty and mercy rightly.

I don’t wish a wildling on any parent, but I do love to find fellow parents of these rambunctious image bearers and encourage them. Lachlan is seven now; he has given us more heart-pounding moments during vanishing acts, more feats of derring-do ill conceived and barely survived, than any of our other four children combined. But for all of that, I have seen more of the goodness and provision of the Lord, more tangible, moment-by-moment evidence of a Divine creator with a plan that WILL NOT be interrupted even by our brave and adventurous son.

All of those crying prayers, all of those oh-please-no moments, did not yield a different little boy; all of those moments changed me. They humbled my pride. They shushed my self-righteousness. They pricked my heart whenever I was tempted to turn to my children for my ultimate identity as a Good Mom. And they made me turn instead to my God, and beg for help. They made me whisper, “But if not, You are still Good.”

They grew my faith, and my trust. Lachlan is on his own path with God; I know He has a great future in store for him, whatever it is. I want to link arms with any Mom who feels hopeless, helpless, when confronted by something in her child she can’t control, and gently say:

“Mama, you are not alone. You were never in control; let go, and trust. Do your best, then give your child to God. Confess your fear. Then trust in the Love of your Creator. He will hold you fast, come what may. And then we can pray together for our children, and give thanks to the One who entrusted us with so much.”