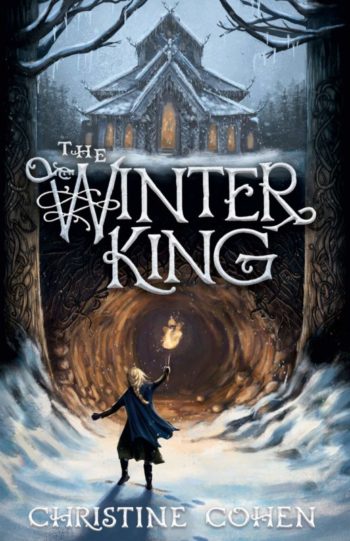 For those of us in the North, winter is a season of waiting. We dance through December and January, buoyed by the holiday spirit, but by March, the grays and whites of the world start gnawing at us, and we can feel the keen hunger for spring. We are meant to feel this way, I believe. Our hunger reminds us of the feast awaiting us when the seasons turn. Stories that capture this waiting have always called to me, from Dickens to DiCamillo, as they wrap the flesh and bone of story around this innate human yearning for redemption and wholeness.

This winter, I was fortunate to encounter a Young Adult novel that powerfully depicts this battle between hope and despair. Christine Cohen’s The Winter King is a gorgeous, redemptive fable about the power of courage and sacrifice to bring the truth to a place of bleakness. Cohen’s tale isn’t afraid to take its characters – and readers – to places of great despair and darkness, in the recognition that for many of us, spending time in these places is a fact of life. But ultimately, as it visits these broken places, The Winter King has much to say about healing and the kindling power of truth.

In the book, main character Cora Nikolson, along with her mother Greta and two siblings, and the rest of the village of Hrimsby, toil in service of the mysterious Winter King. Upon his arrival in the village each winter, the King takes up residence behind the well-guarded doors of the temple while the villagers perform various acts of fealty at the command of a council of Aldormen who essentially govern the town through a strict hierarchy.

Her father dead and her mother’s job barely enough to sustain them as winter approaches, Cora lives with a heavy burden of fears: fear of the snow and cold, fear of impending poverty, fear of the draugar – undead creatures which haunt the forest – and most of all, fear of the mysterious Plague which has devestated Hrimsby once before, and could return with no warning.

Cora’s is a bleak existence, living on the knife-edge between hope and despair. To her credit, as Cohen lays out Cora’s journey, she faces the bleakness head-on, acknowledging the way in which sorrow and grief can haunt a life. But as the book winds its way toward conclusion, she performs a miracle, turning the story on its head and in the way that only eucatastrophe can, reminds us that though the world is fallen, the world will be redeemed.

Cohen’s writing is poetic and fluid, and her world-building rich and vivid. Cora is a memorable protagonist, heady and courageous as she chooses to follow her conscience in the pursuit of answers and her village’s survival. For this reason, I will surely return to The Winter King with my own family, because of the authentic way it presents courage and sacrifice, and the way it has reminded me of the necessity of faith, as well as the power of the truth to set us free.