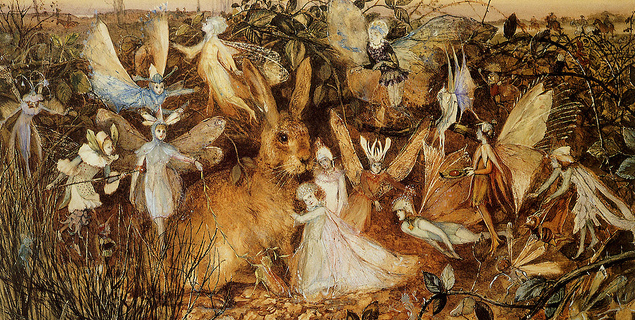 One of the most wonderful gifts I was ever given as a child was a box full of long-play vinyl records of dozens of the world’s favorite fairy tales. I cannot possibly estimate the number of hours they spun out perils and predicaments, fairies and fiends, wishes and wonders to me, but I am certain that an enormous quantity of ideas plentifully furnished the storehouse of my imagination and fertilized my impressionable mind for the true riches of life that lay before me.

Cinderella turned princess, carpets that flew, children changed into gingerbread men…the variety of witches and wishes was a feast of nourishment for my growing soul.

Fairy tales are an essential element of childhood, or so I thought, until I became a librarian and talked to mothers about their children’s reading. It was truly shocking to me to discover that Snow White and Beauty and the Beast were only Disney movies to most of the parents of this generation; they were astounded to discover that these familiar movies were based on tales that have been told for hundreds of years.

Through my work, I also discovered that fairy tales were not only not part of the story life of many children, but that other careful parents had a deep mistrust and caution about exposing their children to them at all. Witchcraft is evil, magic dangerous. In a culture that staunchly holds facts as supreme, waving wands and ladders of golden tresses had been relegated to the rubbish heap, along with our grandmothers’ other silly beliefs. Fairy tales apparently had no credibility and had been sentenced to literary irrelevance.

This was all very alarming to me. I consider the world of make-believe to be critical to a child’s moral development. Innocent children do believe in the fantastical – perhaps why Jesus said, “Unless you become as one of these…?” – and, it is that ready belief that makes the liberal sprinkling of fairy stories throughout their childhood so necessary.

Fairy tales can indeed be fearful, but is it not their far-fetched unreality that makes this a helpful tool in the innocent heart of a child? Imagine allowing a child to never meet an ugly troll or vindictive bad fairy until the day they hear a newscast on the radio or, worse yet, see violent pictures in living color that proclaim that wicked monsters really do exist. Would it not be kinder – and safer – to allow them to consider the concept of evil and unpredictability through make-believe first?  For miseries will come, no matter how much we long for life to treat our children otherwise, and “dressing up” in the far-fetched may just equip and prepare them in some mysterious way for the injustices and uncertainties that surely lie in wait for them in their futures. The world of fairy tales offers a pretend playground within the child in which they can practice navigating the trials and triumphs, as well as the beauties and blisses that will eventually come their way.

The fairy tales of childhood also provide plenty of rich character training. They are full of heroes and heroines who endure suffering with meekness, cleverness, perseverance, courage and grace. It is the nature of a child to try on the characters they are reading about, just as they model themselves according to the characters they costume themselves with when playing “dress up.” In their mind, they are wondering how they will handle the wicked stepmother, whether their courage will hold when they face the fire-breathing dragon, or how they might outwit the devious giants of their fairy stories.

And perhaps the most valuable part of a fairy tale is the predictable happy ending. It is not frightening to face fears when there is a certainty that all things will come right side up in the end. As cynical adults, we may think that this is unrealistic, knowing that life does not always provide happy endings, but did not Joseph teach us that all things are part of God’s plan? Was not the lion’s mouth stopped from devouring Daniel? Was not a stone rolled away to reveal an empty tomb? Is there not a beautiful new heaven and earth awaiting us where streets are paved with gold and the tree of life will provide all healing and drying of tears? Surely our Prince is coming, all shining in white, to permanently subdue all our enemies and we shall live happily ever after?

So dust off those old volumes you haven’t taken from the shelf for awhile, and whatever you do, don’t offer the twaddly, cartoony versions pumped out by companies that credit children with minimal intelligence. If you don’t own any excellently told fairy tales, buy something like Andrew Lang’s Blue Fairy Book, which contains a collection of the best-known fairy tales told in excellent language, long enough to need several bedtimes to reach the end. There is, after all, nothing more satisfying than arriving at that thoroughly delicious “and they lived happily ever after.”