Samwise had climbed too many stairs with Shagrat drooling on his heels. He’d blasted through Cirith Ungol’s gates with Galadriel’s light. He’d searched every black corner for Frodo, and now, his master was a tower trapdoor out of reach.

“He murmured old childish tunes out of the Shire, and snatches of Mr. Bilbo’s rhymes that came to mind like fleeting glimpses of the country of his home.”

Darkness had dogged the hobbits since they’d entered Mordor, but this was a blackness deeper than anything Sam Gamgee had known— like the waters of the coldest, farthest sea swallowing him. And here at “journey’s end” in “darkness buried deep,” Sam does something braver than anything.

He sings of home.

The gardener had killed orcs and maimed a spider, but this was a deadly blow to Mordor. Sam attacked the blackness by remembering the light.

Sam couldn’t put a finger on why he did it. He was “moved by what thought in his heart he could not tell” to sing. Tolkien had a friend who’d felt that way.

C. S. “Jack” Lewis grew up in Belfast, where he first felt shivers of “what thought in his heart he could not tell”—an inconsolable ache for something he couldn’t explain. Twigs and flowers arranged to make a biscuit-tin garden worked the magic on him. He called it sehnsucht.

And wasn’t it always Sam who put the thought of Bag End back in Frodo’s heart?

“Where there’s life there’s hope,” he told his master on Mordor’s road.

C. S. Lewis grew to describe his feeling as “Northerness,” a bit like Shasta the slave, who longed to go North all his life even though he’d never heard of Narnia. He couldn’t help but ache for it. Shasta’s longing exploded into adventure. Sam’s blossomed into song. The unexplainable sehnsucht makes us do things we can’t always explain.

“His voice sounded thin and quavering in the cold dark tower: the voice of a forlorn and weary hobbit that no listening orc could possibly mistake for the clear song of an Elven-lord.”

The tune was simple, the voice thin, but Mordor’s blackest night couldn’t douse the song.

Sam the hobbit, the Gaffer’s son, the gardener, wrote a poem and sang it into Sauron’s lair and let the truth of Home blast fiercer than Elven starlight. He stopped being a hero and remembered he was a hobbit. He wasn’t an Elven-lord with a bow or sword, but a Shireling with dirty feet and an ache to see his country once more.

In all Tolkien’s tales, the image that put tears on my face was the very last. Frodo’s Western passage left me restless on the shore with Sam, but then he returned to the Shire, walked up the Hill, and “there was… fire within; and the evening meal was ready, and he was expected.”

Sam and I are still on the shore, but not without glimpses of light—slits in the shadows through which that swift sunrise glistens. We aren’t Home, but we’re on the doorstep, and the light from within warms us.

“At present we are on the outside of the world, the wrong side of the door. We discern the freshness and purity of the morning, but we cannot mingle with the splendours we see. But all the leaves of the New Testament are rustling with the rumor that it will not always be so. Someday, God willing, we shall get in”

We can slash at the shadows with our sword, yes. But Sting isn’t our sharpest weapon. What deals death to Mordor is the song in our souls that the King will return.

And in the meantime—on the doorstep— we sing that light into Mordor. 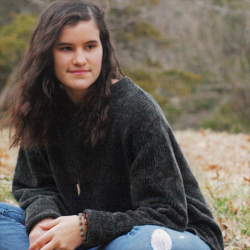 Bethany J. Melton
Bethany J. Melton writes from her brick home on Edgewood, where she takes walks and reads books and plants things. She’s in love with Jesus and waits restlessly for the day when she’ll breathe in "the wild winds" of her "native land" (from her treasured copy of Every Moment Holy).