When my husband and I were growing up, our musical formation spanned from Bach and The Beatles to Ray Charles and Michael W. Smith. We carried on this practice when we became parents. In preschool, our son’s favorite artists also included The Beatles, as well as Carole King, Fiona Apple, and the soundtrack to Beasts of the Southern Wild. I’m pretty sure we played Carole King’s album Tapestry on repeat in our car for a solid month.

While music was easy for our family to enjoy together, prayer was an entirely different story. My husband and I became Anglican in 2013, three years before our son was born. We were drawn to the rhythms and roots of Anglican liturgy. Part of this prayer tradition includes the Daily Office: the four fixed-hour prayer times of Morning, Midday, Evening, and Compline (nighttime prayers). The purpose of the Daily Office is to form Christian communities through prayer and Scripture, reorienting our hearts to the Lord and away from the subtle yet seditious liturgies of the world.

My husband and I wanted to pray these offices as a family. But this was nearly impossible with our son’s brief attention span and constant movement. Even the shortened Family Prayer forms were too much for him. When we encouraged him to pray to the Lord with his own words, he’d just clam up or ask for Legos. Sometimes, praying together became an all out battle. This was not at all how we wanted our son to experience prayer!

Honestly, I shouldn’t have been surprised by our son’s resistance. I myself had a very difficult time praying from The Book of Common Prayer when I ventured into Anglicanism. I came to know Jesus in a church where extemporaneous prayers were revered, and written prayers were viewed with suspicion. In order to step into the rhythm of the liturgy, I did what came most naturally – I started to set the liturgy to music. Imagining new melodies helped me feel the weight and emotion behind each carefully crafted prayer in a way that reading didn’t always do.

One drive home from preschool, our son requested his favorite song, “I Feel the Earth Move” by Carole King. He immediately began tapping his feet and belting out “tumbawing down” at each chorus. At that moment, I had an epiphany: if he could sing Carole King, then he could certainly sing the Daily Office!

So I started to press into the songs that I had begun writing for myself. I focused first on Morning Prayer.  Musically, I took my cues from folk artists that my son enjoyed: Rain for Roots, The Okee Dokee Brothers, and others. Some might view folk music as dissonant with liturgical prayers; I view it as quite the opposite. The Book of Common Prayer was intentionally written in the common vernacular, the language of the people, English rather than Latin. Similarly, I decided to write in what I viewed as a common musical vernacular: folk music.

These songs, a lifeline for me, were now a gift to my son. It was a convergence of my vocation as both mother and songwriter in the church. Eventually, I shared these songs with my church community in Pittsburgh. Many individuals and families asked for the music or recordings to incorporate into their prayer life. I wondered if these songs might have a life beyond my own living room. So, through the encouragement of friends, I embarked on creating the Daily Office EP Project, releasing one short-album of songs for each office. In November 2021, I released Sunrise: Songs for the Morning, and I hope to release the second album, Sunset: Songs for the Evening, in Fall 2022.

My son’s favorite song on the Morning Prayer album is “The Morning Collect.” He loves acting out the chorus of the song which is nearly verbatim to the written prayer (except for one line, in bold): “Defend us by your mighty power/that we may not fall into sin/nor run into any danger/but run to you instead.” When we first sang that last line, my son immediately ran across the living room and wrapped his arms around me. I was struck by the profound nature of this simple act. His physical response to singing this prayer is exactly how I hope we as the children of God respond to our Heavenly Father. Just as my son had run to me, we can run to the Lord in our time of trial, wrapping our arms around him because we love him, and we know that he loves us.

Our family’s prayer life isn’t perfect. But by singing our prayers, our family has found a way to faithfully answer Paul’s encouragement to the church in Colossae:

“Let the word of Christ dwell in you richly, teaching and admonishing one another in all wisdom, singing psalms and hymns and spiritual songs, with thankfulness in your hearts to God.”

I pray that these songs will help the word of Christ dwell in my son, and anyone who hears these musical prayers. And should my son become a father himself, I pray these songs will form his children’s lives just as they are forming his.

NOTE: A Kickstarter crowdfund/pre-order campaign for Elise’s second Daily Office Album, Sunset: Songs for the Evening, is running now, and you can get your own until June 26, 2022! https://www.kickstarter.com/projects/267374063/sunset-songs-for-the-evening 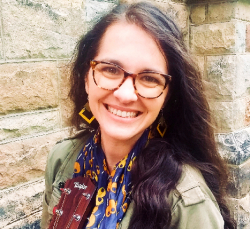 Elise Massa
Elise is a mother, songwriter, and music minister. She is also the Northeast Regional Leader for United Adoration, a non-profit organization seeking to empower artists and church leaders to proclaim the Kingdom of God together in beauty and truth. She lives with her husband and wonder-filled son in Pittsburgh, PA.

You can find her music and more at elisemassamusic.com.