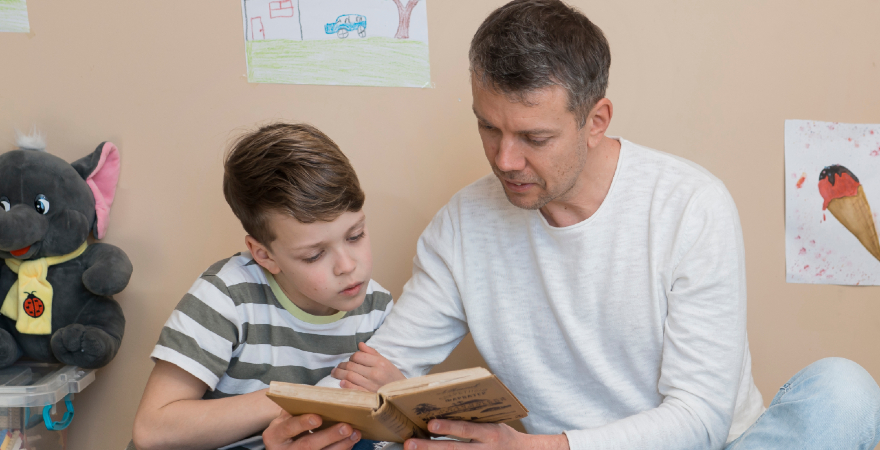 One morning, while strolling through Oxford, J. R. R. Tolkien described Christianity to C. S. Lewis as the “true myth.” Christ, Tolkien explained, is the full revelation of God; all other great stories merely echo that truth. Lewis later credited this discussion with Tolkien as instrumental to his Christian conversion.

A century later, the wisdom of that dialogue resurfaced in my personal life, though in humbler circumstances. I didn’t walk with scholars among halls of erudition. Instead, I sat at our kitchen table, a worn copy of The Fellowship of the Ring in hand, reading aloud while my kids munched peanut butter and jelly.

The Ring Bearer and his companions had just fled across the bridge of Khazad-dûm. As Gandalf wheeled about to face the balrog, my son and daughter paused mid-bite and leaned in, enraptured. The bridge gave way; my kids leaned in farther. Then the balrog’s whip lashed around Gandalf’s ankle. The beloved wizard urged the fellowship to save themselves, and then he sank into the abyss.

I paused and studied my kids warily. Was this too much? I worried. They were both silent and wide-eyed. I counted the passing seconds, and my anxiety mounted. Will I be soothing them through nightmares tonight?

Finally, my son spoke up. His voice was calm. “I think he gave himself for the others, Mum,” he said. “Kind of like Jesus did for us.”

Tolkien, a devout Catholic, gave his readers ample opportunities to discuss Christian themes. Yet when he claimed that myths offer fragments of divine truth, “splintered from a single White to many hues,” he wasn’t talking about his own fiction.

The day we journeyed through Middle-earth over lunch, my kids and I were contemplating an imaginary realm with fictitious characters. Yet, thanks to regular Scripture reading as a family, coupled with a masterfully crafted story, the gospel broke through.

When we apply the truths of Scripture to conversations about great books, we open our children’s eyes in fresh ways to God’s majesty, his mercy, and his incredible grace. In other words, we point them to the gospel.

Epic stories aren’t the easiest reads on the family bookshelf. Their language can be ornate or archaic, and the themes are often mature. As we curl up with our kids to read, a picture book with less potential for nightmares may seem the safer choice.

But, with care, these concerns are surmountable. Here are five points to guide you along the way as you journey into great literature with your children.

1. Give them Scripture first.

The gospel will come alive through great books only if kids already know the Scriptures. So give them the Bible first, foremost, and regularly. Then use literature as a supplement. The goal is to enhance your family devotions, not to replace them. Teach your kids that God’s Word is a lamp to their feet and a light to their path (Ps. 119:105), then help them to perceive glimmers of this truth through stories.

It takes a discerning eye to present mature material in ways that will excite and educate but not terrify. Preview any book ahead of time. When possible, pick a story with which you’re already familiar, so you can edit sections that would overwhelm your children. Ensure the illustrations aren’t too graphic or upsetting. Kids’ sensitivities vary. The best stories will challenge and inspire without causing distress.

With some books, the original text is so engaging that it holds the attention of even the squirmiest of listeners. The Lord of the Rings trilogy, The Chronicles of Narnia, and The Jungle Book are great examples. For more complex tales, good abridged versions can recount sophisticated themes in simple language without sacrificing the elements critical to the story.

A habit of reading aloud with your kids facilitates interweaving great books with Scripture. A child unaccustomed to read-alouds may initially grumble, but as the routine melds with your regular rhythms, the complaints will ebb.

A child unaccustomed to read-alouds may initially grumble, but as the routine melds with your regular rhythms, the complaints will ebb.

Pick whatever time works for your family—after school, during a meal (which offers the added benefit of a captive audience), before bed—whatever enhances and doesn’t hinder your busy family life. Audiobooks in the car count, too, provided you dialogue with your kids about what they hear.

5. Point them to the gospel.

As you read with your kids, be alert to biblical themes. The avenues for discussion in Tolkien’s novels are plentiful: his descriptions of the Ring of Power offer some of literature’s most vivid illustrations of sin, emphasizing how such a little thing, so pleasing to the eye, could coerce and ultimately enslave its wearer.

Other authors offer equally fertile ground. Shakespearean tragedies vividly portray the destructive power of sin. Dickens stirs us to compassion for the poor, for widows, and for orphans (Deut. 10:18; James 1:27). Even Greek mythology, with its rampant idolatry of false gods, can prove instructive when silhouetted against Scripture. Vindictive Zeus and conniving Hera sharply contrast with the God of the Bible, whom we know is “merciful and gracious, slow to anger, and abounding in steadfast love and faithfulness” (Ex. 34:6). Even bad guys help us emphasize how the grace of God is so radical, so astounding, and such good news.

In his biography of Tolkien, Humphrey Carpenter recounts Tolkien’s thesis that “inevitably the myths woven by us, though they contain error, will also reflect a splintered fragment of the true light, the eternal truth that is with God.”

When approached with a careful eye and a firm grounding in Scripture, light-splintering myths that have inspired readers for centuries can also point our kids to Christ. Dare to wander with your children in those reflections. Read great stories with them, to direct their minds to the greatest Story of all.

Kathryn Butler
Kathryn Butler, MD, is a trauma surgeon turned author and homeschooling mom. Her books Between Life and Death and Glimmers of Grace both explore faith and medicine, while the Dream Keeper Saga is a middle grade fantasy series.

When not writing, she loves adventuring through books with her kids, wandering through the mountains, and chasing dragons out of her kitchen.