My 11-year-old son desperately wants a dog. It is a frequent topic of conversation with many natural on-ramps. Every dog we pass in the park merits a remark on its size, coloring, or temperament—all in comparison, of course, to what his future dog would be like.

One thing has become increasingly clear to me through all our conversations on the subject. The criteria my son chiefly considers in a dog isn’t one of cuteness or cuddliness. It’s one of communion. He deeply desires fellowship with another living thing who will like him, while also being unlike him.

In his superb lecture On Fairy Stories, J.R.R. Tolkien argues that my son’s desire strikes upon something essential to fairy stories (as well as the human condition). Tolkien says,

“[Here is] one of the primal ‘desires’ that lie near the heart of Faërie: the desire of men to hold communion with other living things.”

In other words, fairy stories scratch at mankind’s innate itch for unhuman communion—for meaningful interactions with living beings who are not like us.

If you doubt whether you have that itch, just ask yourself this question: “Have you ever given in to the Doctor-Dolittle temptation of talking to animals?” Whether it’s the robin singing in the hedge or the neighbor’s dog over for a visit, how long can you suppress the “Oh, hello there!” desire for some small but meaningful interaction?

Here we find another application for the famous maxim of C.S. Lewis, “If I find in myself a desire which no experience in this world can satisfy, the most probable explanation is that I was made for another world.”

Christianity teaches that we were indeed made for another world. The Bible promises us a world renewed, which will perfectly fulfill all the deepest longings of our hearts. There will be an age to come when “the leopard shall lie down with the kid; and the calf and the young lion and the fatling together; and a little child shall lead them.” (Isaiah 11:6 KJV).

More than just hold congress with angelic powers, the Bible says that we shall judge them (1 Cor 6:3).
Fairy stories serve us best when they stir our hearts with longing for this kind of restoration. When they offer us glimpses of broken fellowship that will one day be rekindled. When they give us foretastes of a world reordered by God, where good things can run wild.

Tolkien understood how certain stories could produce these feelings in our hearts. This is probably one of the reasons why he made the following distinction in On Fairy Stories:

The magical understanding by men of the proper languages of birds and beasts and trees, that is much nearer to the true purposes of Faërie. But in stories in which no human being is concerned; or in which the animals are the heroes and heroines, and men and women, if they appear, are mere adjuncts; and above all those in which the animal form is only a mask upon a human face, a device of the satirist or the preacher, in these we have beast-fable and not fairy-story.

For Tolkien, it was essential that man and beast share one world together—even though their fellowship within that one world is almost entirely broken. What lies near the heart of fairy stories, therefore, is the restoration of creatures formerly sundered from one another. Man from beast, elf from dwarf, ent from entwife—all those who have grown estranged through their own selfish conceit and the devious work of the Enemy. In fairy stories, we feel anew the bittersweet sting at what was lost as well as the hopeful wonder at what might one day be restored. These are the kind of stories that I want to read, write, and pass on to my children.

My family and I have lived in England and France over the past six years, helping new churches get started. We’ve never had a pet, as our sojourning life in Europe has been far from conducive for keeping one. Thus far, I have been cold-hearted and unyielding on this point. But in writing out these thoughts, I feel my own arguments turning on me, like enthusiastic dogs jumping upon their reluctant owner. I can’t fight them off, and I don’t know if I want to any longer. So (to the great joy of my 11-year-old son!), it looks like a four-legged friend will be joining our family in the not-too-distant future. 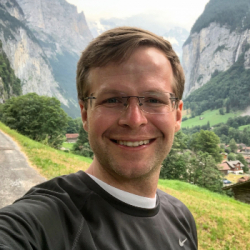 K. J. Pugh
K.J. Pugh is an American who has spent most of his 30s planting churches in Europe with his wife and two lovely kids. Out of this experience, K.J. wrote his first book for Read-Aloud Adventures (now coming to Kickstarter).

He enjoys walking, cycling, making and consuming cups of Yorkshire Tea, as well as inserting quotes from Tolkien and Lewis into casual conversations.