Sometimes, when I re-read books I loved as a child, I find they have lost much of their luster. But occasionally, I find glimmers there of gems I hadn’t noticed before.

Lately, I’ve been savoring afresh the tales of Winnie-the-Pooh by A.A. Milne. A charming collection of anecdotes featuring Pooh and his adventures (many of which were later popularized by Disney), this childhood classic never fails to disarm me with its simplicity, goofiness, and exuberant word play.

Today, the story of “Pooh Goes Visiting and Gets Into A Tight Place” caught my eye.

Maybe it’s the chaos in our world right now. Maybe it’s the way visiting others suddenly feels taboo, or the way so many of us feel “stuck” in our jobs, our homes, our circumstances. Whatever it may have been, I could feel myself drawn to this story, in which I vaguely recalled Pooh stuffing his tummy and finding himself stuck in a hole as a result.

What I didn’t recall was the tale’s clever wink to the soul-nourishing power of stories and community. (Perhaps because the animated film version I lovingly remember from my childhood completely omitted this detail.)

The chapter begins on a fine morning in the forest. Pooh is ambling along, humming to himself and wondering what everyone else might be doing, when he stumbles upon the entrance to Rabbit’s home. Rabbit politely (if not reluctantly) invites Pooh in for a little something to eat, and soon Pooh realizes he has eaten rather more than he should have (in fact, he has eaten everything).

Not surprisingly, when Pooh tries to leave Rabbit’s house, he gets himself wedged in the doorway. His top half is trapped outside, his bottom half inside. He cannot wiggle forward, nor can he be pushed back. He is well and truly Stuck.

The resourceful Rabbit fetches the even more resourceful Christopher Robin, who calmly assesses the situation. “There’s only one thing to be done,” Christopher says to Pooh. “We shall have to wait for you to get thin again.”

And here comes the part that Disney omitted:

Rabbit offers an unusual suggestion. “We’ll read to you,” he says cheerfully, before asking if Pooh would mind terribly serving as a towel-horse while he is so inconveniently lodged. Pooh is more concerned about food than about books or towels, and asks what he’s supposed to eat for the next few days.

“I’m afraid no meals,” replies Christopher Robin, “because of getting thin quicker. But we will read to you.”

And now the glimmer burns bright:

“Bear began to sigh, and then found he couldn’t because he was so tightly stuck; and a tear rolled down his eye, as he said:

‘Then would you read a Sustaining Book, such as would help and comfort a Wedged Bear in Great Tightness?’

So for a week Christopher Robin read that sort of book at the North end of Pooh, and Rabbit hung his washing on the South end…and in between Bear felt himself getting slenderer and slenderer.”

The simple illustration by Ernest Shepard beautifully complements the text: Christopher Robin, legs curled off to one side, cradles a book in his lap only a few feet from Pooh, who looks on forlornly (and perhaps even hopefully) from his helpless confinement in the rabbit-hole.

In the text as in the drawing, we can see that Pooh’s arms and shoulders are free. Christopher Robin could have chosen to deposit a pile of books in front of Pooh, leaving him to flip through the pages alone while Christopher went about his day.

But instead, Christopher Robin willingly interrupts his own routine and playtime, and chooses to slow and sit beside a friend starving for hope and freedom (and perhaps a dollop or two of honey).

And there, through the lens of our current crisis, I catch it—the sheening spark of a hope-gem tucked sweetly into a childhood story.

It is not only Sustaining Books that help and comfort us in a Great Tightness, but also the Sacrificial Love and Kindness of friends.

Even a Bear of Very Little Brain can see that. 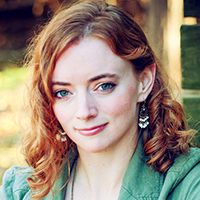 Katie Williams
Katie is a storyteller and beauty hunter who delights in chasing down glimpses of God-glory from behind the lens of her camera.

When she isn't writing, reading, painting, or speaking, you might find her sipping a homemade latte or crafting an absurdly decadent cheesecake for her friends.

Connect with her at www.katieswilliams.com or on Instagram at www.instagram.com/katie.s.williams.