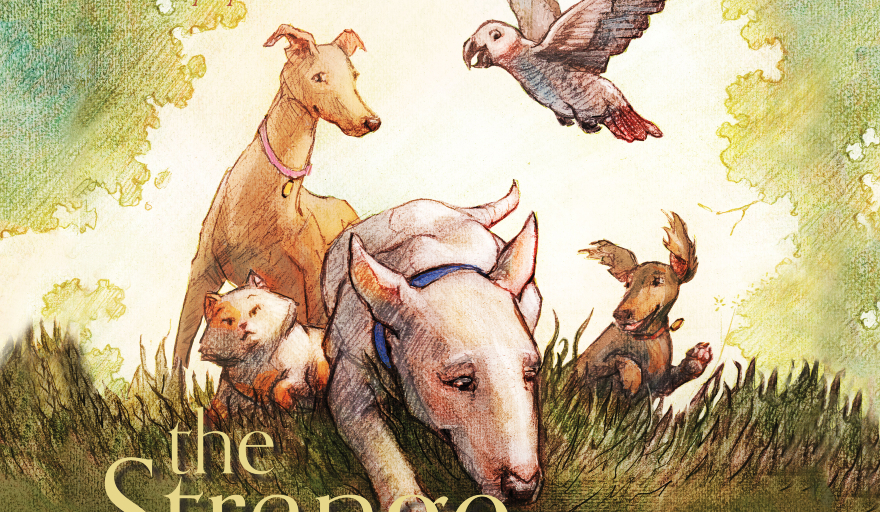 This winter welcomed the release of James D. Witmer’s new mystery chapter book, The Strange New Dog. Story Warren readers might be familiar with his delightful book of short stories, A Year in the Big Old Garden, featuring tales of squirrels, chipmunks, and rabbits. This one flips the script and takes us indoors, into the world of household pets.

In the great tradition of stories like Bunnicula and the movie Homeward Bound, The Strange New Dog features a lovable collection of dogs, cat, and parrot, and is told from their perspective, rather than that of their human owners. When the story opens, the Allen family’s house is crowded with two parents, three boys, and four pets—Gibb, the parrot, plays the role of de-facto leader among the animals, and then there’s Duchess (a greyhound), Stretch (a lazy cat), and Max (a dachshund). It’s finally the day for Donny, the youngest Allen boy, to choose a dog of his very own, and the other family pets are a bit nervous, and curious to see what the newcomer will be like. What they don’t expect is Henry, a bull terrier who is uppity, a bit mysterious, and doesn’t seem to want to be there at all. Who wouldn’t want to be in the cozy, friendly Allen house, with a great kid like Donny to look after? Henry’s also got a wild story about being “kidnapped”—but how can that be, when they all know he came from the Pine Grove Animal Shelter?

Whether there’s truth to Henry’s story or not is the mystery of the book, which I won’t spoil here, but trust me—it’s a good one. I think it’s a perfect puzzle for the chapter book age group; enough mystery to keep younger kids in suspense if you’re experiencing this story as a family read-aloud, but with a few clues here and there for older kids to pick up on and perhaps triumphantly guess the ending, if they’re reading it for themselves. The stakes are real but not too scary, and the mystery is neatly wrapped up by the final chapter. I love the idea of the family pets communicating and working together—that aspect most strongly reminded me of Bunnicula or even Toy Story. There’s tons of scope for imagination in thinking about a group of family pets communicating in secret! I think readers who have a few pets at home will enjoy speculating about that.

Great illustrations by Sydni Lee bring some extra personality to the pets and humans alike. I particularly love the cover image with Henry right in the middle, sniffing for clues. Bull terriers have an unusual egg-shaped head, and it’s fun to see Henry’s distinct and specific profile instead of a generic floppy-eared puppy like you’d find in many other dog books. I’m looking forward to many more stories about the Allen family and this collection of critters—Max the dachshund is particularly funny, so I was pleased to see that the preview for Allen Family Mysteries Book #2 opens with his tiny legs in hot pursuit of another puzzle!