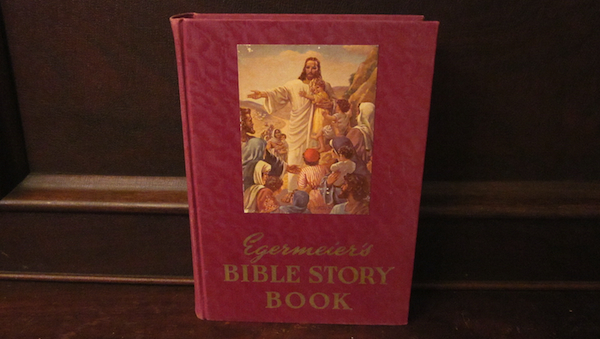 If you have children between the ages of four and ten, I commend to you the Bible Story Book by Elsie E. Egermeier, who sounds like a Dr. Seuss character, but isn’t.

Originally published around 1922, Elsie’s (can I call her Elsie? Egermeier is SO hard to spell!) book provides a chronological overview of the Bible in 312 stories. It is written in straightforward language, but is far from dumbed down.

My family is reading through Elsie’s Old Testament now, and I have been surprised to find themes I, in a lifetime of Bible reading, never saw before. I think this is because Elsie strikes a wonderful balance between detailing events and compressing the story to make it digestible.

One theme that runs from king Saul all the way through king Ahab is a choice:

It has been a welcome discussion tool as we teach the why of obedience. God made everything and owns everything. So, He knows how things work best. Where does disobedience take us? We don’t have to guess – just look at king Saul. Is that who we want to be?

I also appreciate that there is no whitewashing of characters here. Elsie chronicles Saul’s slow slide from a noble young king into a craven wretch who slaughters priests and throws spears at his own son; pointing out the key moments he chose disobedience. Then she gives us David’s life, complete with his murder of Uriah and marriage to Bathsheba. It is not written inappropriately; nothing more graphic than,

“At [David’s] command Uriah was stationed at a dangerous place in the battle line so he would be killed. When Uriah was dead, David married Bathsheba.”

But trust me, the kids get it. And because they see the ugliness of David’s sin, they see that the only difference between David and Saul was repentance. Beautiful.

I didn’t really plan this, but my children first encountered the ideas of war, murder, abuse, and deceit in Elsie’s book. This means that they encountered these sad truths in the context of redemption, repentance, adoption, and honor. I didn’t labor to frame our first discussions about tragedy, because they were already framed by God’s word.

We at Story Warren believe in introducing children to the actual Bible while they are still young – even earlier than they can grasp the whole thing. Elsie’s stories are a great companion to help them (and maybe you) connect the dots.