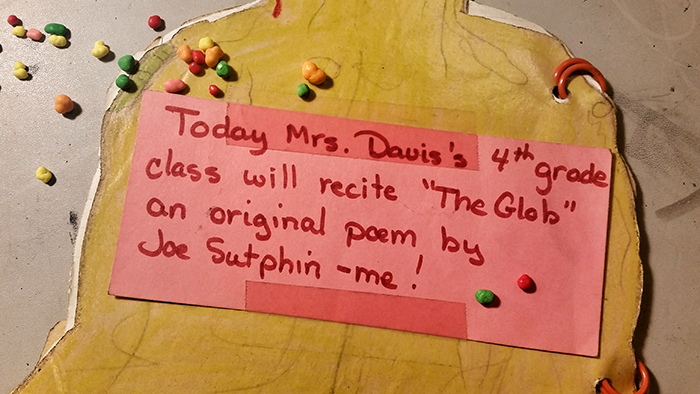 A few days ago in the mail, I received a t-shirt with the classic Bunnicula book cover on it. I’ll admit, I got a bit emotional. Bunnicula: A Rabbit-Tale of Mystery

was written by Deborah and James Howe and published in 1979. It is a humorous, children’s mystery novel about a family who finds a black and white bunny at a movie theatre one evening while watching Dracula, all told from the perspective of the family dog.

I never read it.

In the fourth grade, I was attending public school for the first time. I was the new kid, and as some new kids do, I tried to find what could make me fit in with the regulars. It didn’t take long for everyone in my homeroom to notice that I was a kid who could draw. Not just draw, but draw well, and on demand, for a price. I traded art for goods regularly, and there was no shortage of demand for my original art.

It also didn’t take long for some kids in the homeroom across the hall to counter my classroom’s pride with the announcement that they too had “the kid who could draw” just a few steps away in their class. Without my consent, the two opposing groups of boys pitted my talent against the “other” kid’s talent in a draw-off. And they were serious about it.

I don’t recall anything that was drawn by either of us, or what the stakes even were. One thing I do remember was that this other kid was good. It was my first time encountering anyone else my age who could draw like me. I had always been the oddity. It was as if I’d met another mutant among the masses of normal kids. However, to the surprise of the warring factions of boys, this other artist and I quickly became very good buddies. A friendship that has lasted until this very day. All that to say that drawing pictures played a major role in how I made friends and formed my identity among other kids. As a result, it was how my teachers knew me as well.

One teacher in particular, was my homeroom teacher, Mrs. Davis. It was impossible for her not to notice my artistic abilities. While she was teaching us Math, I was drawing a haunted house for a kid across the room. While she taught Reading, I was drawing a motorcycle for the kid a few seats down the row. One day as she paced the room while teaching, she even caught me in the final pencil strokes of a fine portrait of none other than her. It was a real doozie. A classic. There she sat at her desk, monstrous, a jagged scowl scraped across her face, the inspirational, book club posters on the front of her desk replaced by stern warnings to “SHUT UP!” and “SIT DOWN!”. She calmly reached down and took the piece of fine art and tucked it under her clipboard.

I may have forgotten about the incident and the drawing, had Mrs. Davis not pulled it out to share at Parent-Teacher Conference a few weeks later. I don’t remember the conversation that took place. I just remember being terrified of the punishment to come, only to realize that Mrs. Davis was strangely giggling as she showed the drawing to my parents. It seemed that I was not in trouble after all, but actually being spoken affectionately about.

In the schooldays to come, Mrs. Davis employed a wide range of efforts to corral my inclination to mindlessly doodle, into something constructive and beneficial to my education. When the class needed a bulletin board to display the facts we were learning about dinosaurs, she had me draw a giant Stegosaurus on butcher paper. She hung it in the hallway outside our classroom. When we were given the assignment to write a spooky poem for Halloween, she encouraged me to make mine into a book complete with a front and back cover and illustrations. The art was clearly inspired by the rise of Madballs and Garbage Pail Kids.

She was so impressed with my poem book, The Glob, that she had our entire class recite the poem at an assembly with parents in attendance. Our entire classroom stood chanting, “The Glob, The Glob, What an ugly slob.” I didn’t know what “surreal” meant then, but I recall now how surreal the experience was for me. Despite this and other wonderful efforts to include and help focus my creative brain within the classroom setting, I continued to doodle rather than focus.

, as she did several days a week, she noticed that I was not paying attention to the story. My attention was focused somewhere inward, and coming out in doodles on the back of a handout. Later that week, before the next reading session, she called me to her desk. Again I expected to be disciplined. However, instead of discipline, Mrs. Davis had one last game plan. As she read to the class from Bunnicula, she instructed me to listen to the scenes being described and to illustrate them on paper as she read.

This resonated with me. At home I had a habit of turning on a story record or cassette and drawing scenes from them. So as Mrs. Davis read scenes of Harold the dog and Chester the cat trying to save their human family from a perceived vampire bunny, I illustrated the scenes on paper at my desk. I remember those moments vividly. I remember the impact it had on my attention in class. I remember even more, the impact it had on me in the school library.

I was not a good reader due to my lack of focus, so once I became too old to check out picture books, I rarely checked books out anymore. But I began to search in our school library for further books in the Bunnicula series. I found Howliday Inn

and The Celery Stalks at Midnight

. I loved the campy, spooky cover art. I scoured the pages for the humorous illustrations. I realized the correlation between the written word and the art that accompanied it. I still didn’t read well, but was more likely to pick up a children’s novel or chapter book now, knowing that there might be art among those pages. The art spoke story to me in a way the written words could not.

Like all school years, that 4th grade year came and went in a flash. I never encountered another teacher, that was not an art teacher, that recognized my art and its connection to my mind’s focus. I didn’t even think about Mrs. Davis much in the coming years, or truly realize what impact she may have had on me.

But a few weeks ago I stumbled across a beautiful, Bunnicula t-shirt while browsing online. All of those memories of 4th grade flooded my mind. Now an illustrator of children’s literature myself, I felt such sentiment in wearing that shirt with that campy cover image printed on it. I’m still a slow reader. To this day, when a publisher sends me a manuscript, I rarely read it myself. I tend to highlight a portion of the written work on my Mac, choose Speech, and click Start Speaking. And like my 4th grade teacher, my Mac reads it to me as I work on my art. My ever-supportive wife, Gina, has even been known to sit in the studio and read a manuscript to me as I work. And frequently, I will have an audio book playing as I illustrate scenes from a separate novel that I’m working on. Audible story and visual depiction are forever in my core.

You see, I never read Bunnicula, but Bunnicula left its mark on me.